The sound of the thud from a clash of heads just added to concern.

The game was only five minutes old at the Emirates Stadium when Wolverhampton forward Raul Jimenez and Arsenal defender David Luiz collided while jumping for the ball.

The emptiness of the Emirates Stadium — with fans still excluded until next week due to the pandemic — made the troubling sound all the more audible. 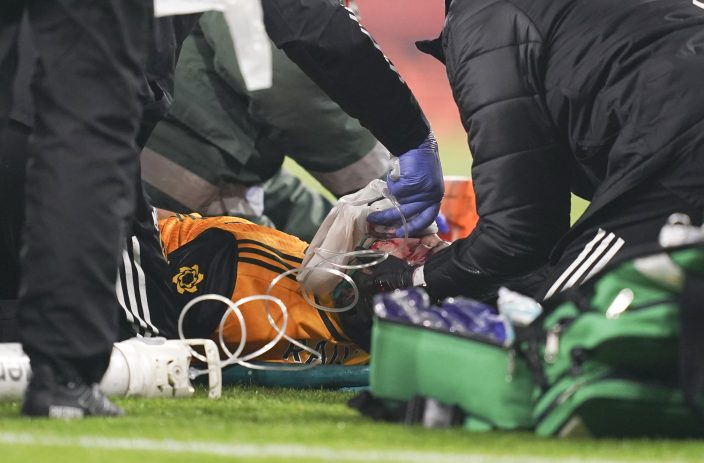 Concerns grew as Jimenez appeared motionless and was eventually wheeled off the field with an oxygen mask on.

“I knew straight away that something was wrong,” Wolves manager Nuno Espirito Santo said. “Everyone called ‘red, red,’ which means it’s a bad situation. You see the panic in their eyes."

By the time the Premier League game ended — with Wolves beating Arsenal 2-1 — there was a more encouraging update from the London hospital with Jimenez said to be conscious and talking. 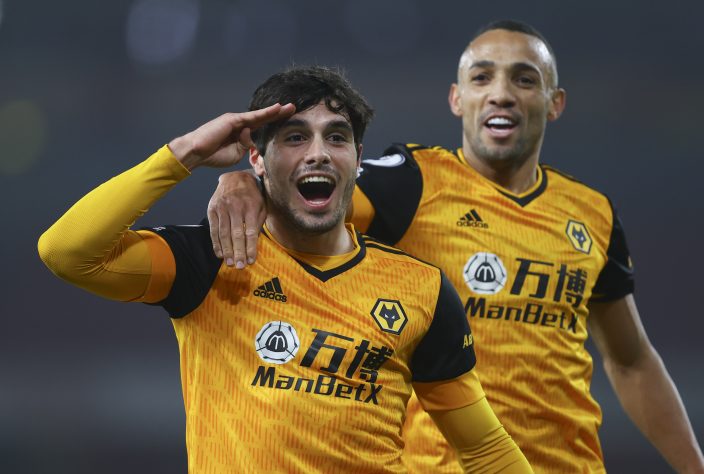 One of the lingering concerns, though, was why a bandaged and bloodied Luiz played on until the interval at a time when there is growing scrutiny into the long-term impact of head injuries. Trials of concussion substitutes are only due to begin in 2021.

“They have some tests they have to do before they put him back on the pitch, and then David was just concerned about the cut, nothing else," Arsenal manager Mikel Arteta said. "They will continue to do some checks in the next few hours but he was fine.” 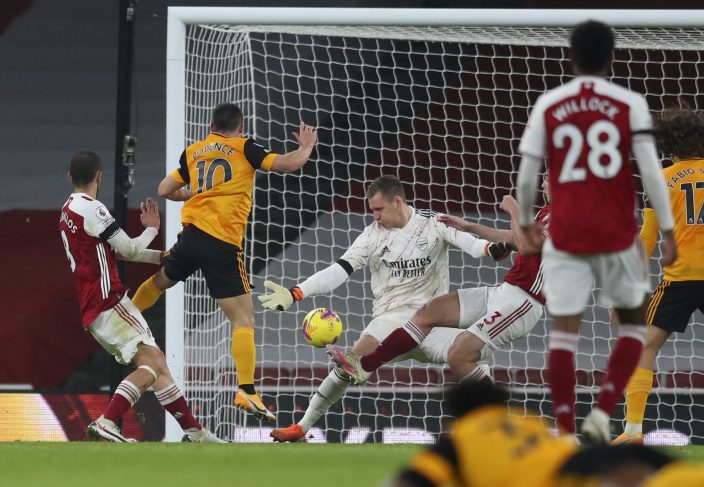 The result was not fine for Arteta, with Arsenal languishing in 14th place and eight points off the lead after 10 games. That leader, unusually, is Tottenham, which drew 0-0 at Chelsea on Sunday.

Another former Premier League champion avoided a day as miserable as Arsenal's. Manchester United fought back from two goals down to win 3-2 at Southampton.

Exactly a year to the day after Arsene Wenger's immediate successor, Unai Emery, was fired, Arteta is also struggling badly. With 13 points, Arsenal has its lowest tally after 10 games in 39 years.

Next up in the Premier League for Arsenal is one of the biggest games of the season: the north London derby against Tottenham next Sunday, on the first weekend with some supporters allowed back into the capital's stadiums for the first time since March.

While Jose Mourinho was accustomed to winning titles with Chelsea — three times — he is now in charge of a Tottenham side that hasn't won the championship since 1961.

No wonder he keeps downplaying the prospect of still being first in May, despite Tottenham showing defensive resilience to draw at Stamford Bridge where the team has only won once in 30 years.

The point, following last weekend's victory over Manchester City, put Tottenham ahead of champion Liverpool on goal difference and two points in front of third-place Chelsea.

Mourinho faltered in his previous attempt to win the title at an English club other than Chelsea, lasting only two full seasons at Manchester United before being fired in 2018.

Even after the comeback at Southampton, United is in eighth place, a point behind the south-coast hosts.

The game was turned around by United — following Jan Bednarek’s header and James Ward-Prowse's free kick for Southampton — after the halftime introduction of free summer signing Edinson Cavani.

The 33-year-old former Paris Saint-Germain striker set up Bruno Fernandes to reduce the deficit, nodded in the equalizer and then turned in Marcus Rashford's cross for a stoppage-time winner.

“It’s a trait that Manchester United players always should have," Solskjaer said, “never to give up, never to give in."