Taysom Hill's two touchdown runs led the New Orleans Saints to a 31-3 win Sunday over the Denver Broncos, who were thrust into a quarterback quandary when their passers failed to wear masks as mandated by the NFL's COVID-19 protocols.

In a grind-it-out slugfest like from pro football's early days, the Saints (9-2) won their second straight game with Hill subbing for the injured Drew Brees. Hill wasn't nearly as sharp as a week earlier against the Falcons, when he completed 18 of 23 passes for 233 yards and a 108.9 passer rating.

New Orleans Saints outside linebacker Demario Davis (56) and outside linebacker Kwon Alexander (58) celebrates a defensive stop against the Denver Broncos during the second half of an NFL football game, Sunday, Nov. 29, 2020, in Denver. (AP PhotoJack Dempsey)

And that was much better than Broncos QB Kendall Hinton, a rookie receiver and former Wake Forest quarterback from their practice squad who made a shaky NFL debut by going 1 for 9 for 13 yards, no touchdowns and two interceptions.

Sometimes, the Broncos had their running backs take direct snaps. But the Broncos converted just once in 10 third-down tries. 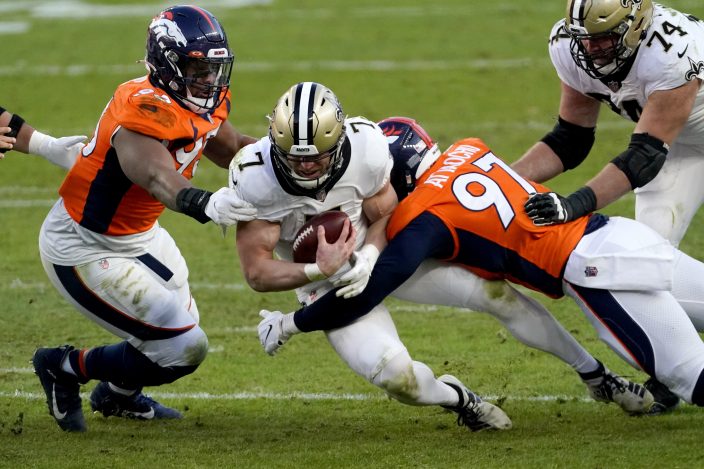 Starting quarterback Drew Lock, backup Brett Rypien and practice squad veteran Blake Bortles were disqualified over the weekend when the NFL discovered the three weren't wearing masks Wednesday, the day before No. 3 QB Jeff Driskel tested positive for the coronavirus.

Hinton didn’t complete any of his seven first-half throws, one of which was picked off by Janoris Jenkins. The Broncos managed 37 yards and a single first down before halftime.

The Saints led 7-0 until scoring twice off turnovers in the final 2:22 of the first half. 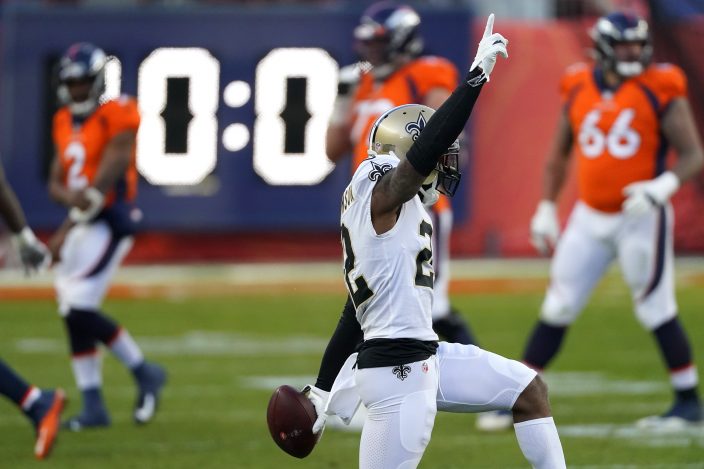 New Orleans Saints safety Chauncey Gardner-Johnson (22) celebrates his interception against the Denver Broncos during the second half of an NFL football game, Sunday, Nov. 29, 2020, in Denver. (AP PhotoJack Dempsey)

Center Lloyd Cushenberry III’s low snap skittered past Lindsay and Kwon Alexander was headed for the end zone after scooping it up. Broncos left tackle Garett Bolles, who signed a four-year, $68 million extension Saturday, tripped him up at the 23.

Hill, who scored from 1 yard in the first quarter, added a 2-yard TD run to make it 14-0. Two plays later, Jenkins intercepted Hinton’s underthrown pass to DaeSean Hamilton, and that set up Wil Lutz’s 40-yard field goal as the clock expired.

The Broncos finally scored on Brandon McManus’ 58-yard field goal in the third quarter set up by rookie Essang Bassey’s 26-yard interception return. But the Saints responded with Latavius Murray’s 36-yard scamper that made it 24-3.

The Broncos tried to persuade the NFL to delay the game to Monday or Tuesday night like the Ravens-Steelers game was pushed back from Thanksgiving after a virus outbreak on the Ravens. When that failed, they turned to Hilton, who played quarterback his first three seasons at Wake Forest before moving to receiver in 2019, when he caught 73 passes for 1,001 yards and four touchdowns.

He signed with Denver as an undrafted free agent and spent all of training camp with the Broncos before being waived on Sept. 5. He rejoined the practice squad on Nov. 4.

Hinton's last touchdown pass came on Oct. 7, 2017, against Clemson, which is more recently than Hill, whose last TD throw was on Nov. 26, 2016, for BYU against Utah State.

An hour before kickoff, Lock tweeted an explanation and a mea culpa in which he admitted the QBs weren't wearing their masks when they gathered Wednesday.

While some players such as tight end Noah Fant were incredulous over the league forcing Denver to play a game without any of its QBs, other Broncos took the news in stride.

Von Miller and Bradley Chubb both made posts comically suggesting they could play quarterback, and the team’s Twitter account even had a mock request inquiring if Nuggets supreme passer Nikola Jokic might be available.

Saints: visit Atlanta for the second leg of a three-week road trip.