It's why they gave up a first-round draft pick to get him in a March trade and then immediately signed him to an $84 million contract extension when he arrived.

On Sunday, defending rushing champ Derrick Henry made it perfectly clear just how valuable Buckner's presence is. With Buckner sitting out, the NFL's defending rushing champ ran for 140 yards and three touchdowns in the first half, finished with 178 yards and helped Tennessee seize control of the AFC South with a 45-26 rout on the Colts' home turf. 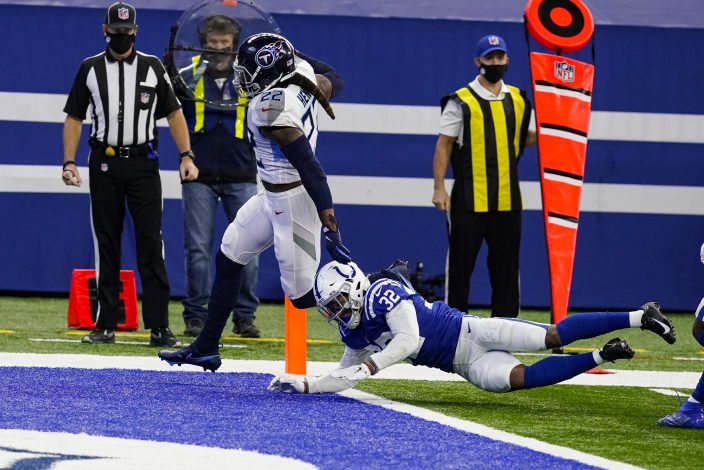 Tennessee Titans running back Derrick Henry (22) gets past Indianapolis Colts free safety Julian Blackmon (32) for a touchdown in the first half of an NFL football game in Indianapolis, Sunday, Nov. 29, 2020. (AP PhotoDarron Cummings)

“You’ve got to stop the run, that’s the main thing. In the first half we didn’t do that,” Darius Leonard said. “It doesn’t matter who’s up (playing) or not. We just didn’t do a good enough job as a team.”

The Colts face an uphill battle to get back in the division chase. Tennessee (8-3) has a one-game lead with five games left, a split in the two-game season series and currently holds the tiebreaking edge based on the teams' division records. 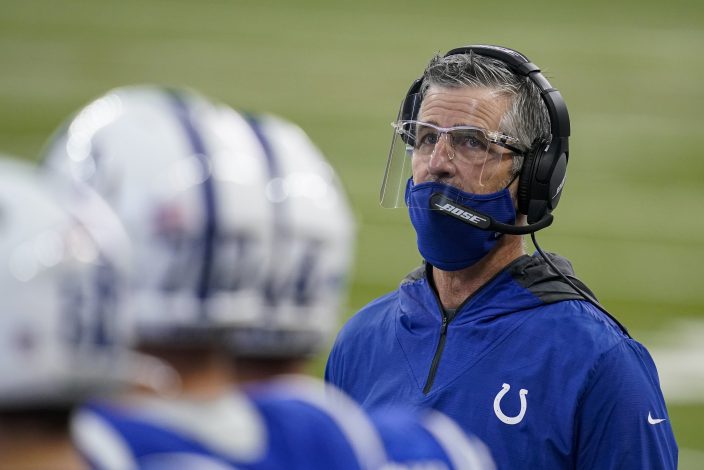 Indianapolis Colts head coach Frank Reich stands on the sideline in the first half of an NFL football game against the Tennessee Titans in Indianapolis, Sunday, Nov. 29, 2020. (AP PhotoDarron Cummings)

The Colts' defense started the day ranked second in the league. If it can get back to that standard, Indy can still make a run.

First, though, it needs to figure out what went wrong against Henry in the last three matchups.

Last year, Henry rushed for 149 yards in the Titans' 31-17 win. On Nov. 12, Henry had 103 yards in a 34-17 loss, and then came Sunday's impressive performance. He was running through tackles and dragging defenders throughout the first half.

Those are the only three 100-yard games the Colts have allowed since 2018.

Without Buckner, Indy's top run-stuffer, or Denico Autry, who leads the Colts with six sacks, they weren't the same. Both players are on the COVID-19 list.

Starting linebacker Bobby Okereke also missed the game with an ankle injury and starting safety Khari Willis left in the second half with back and quad injuries.

The problem could be bigger than the absences, too. Indy has now given up 63 first-half points to Green Bay and Tennessee over the past two weeks, including 35 against Tennessee.

“If we want to reach our goals, we have to solve that," linebacker Anthony Walker said. “This is a boxing match at the end of the day and if we don’t throw the first punch and we continually get hit in the mouth, that’s something we need to get corrected."

The solution begins where it always does — stopping the run.

Sure, having Buckner, Autry and Okereke on the field might have helped Sunday.

But with their return dates unclear, the Colts need more immediate solutions.

Current league rules require players with positive COVID-19 tests to stay home until at least 10 days after the onset of symptoms and at least 24 hours after symptoms go away. It could put Autry, who went on the list Nov. 20, on track to play next week at Houston.

“DeForest is a great player and we understand that," Walker said. “But we make no excuses. We have to be able to adjust. We’ve got to be able to come out and execute and we didn’t do that today.”