Patrick Mahomes threw for 462 yards and three touchdowns to outplay Tom Brady and lead the Kansas City Chiefs to a 27-24 victory over the Tampa Bay Buccaneers on Sunday.

Tyreek Hill scored on receptions of 75, 44 and 20 yards, backflipping into the end zone on his second TD, and finishing with 13 catches for 269 yards — the last an 8-yard catch on third-and-7 to give Mahomes an opportunity to run out the clock.

The Chiefs (10-1) won their sixth straight game and clinched their seventh 10-win season in eight years under coach Andy Reid. 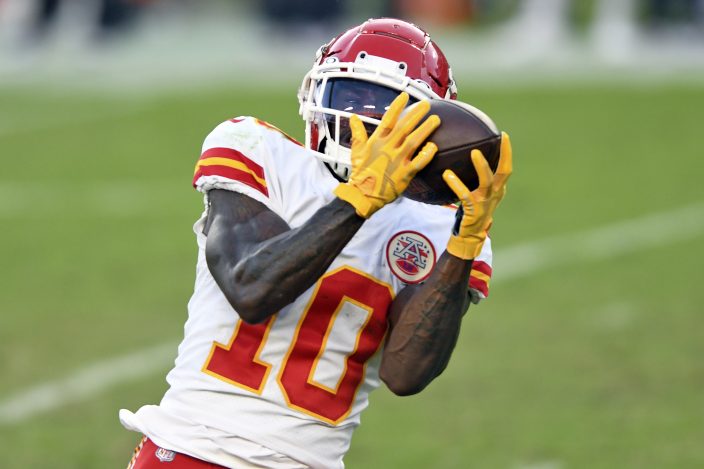 The reigning Super Bowl champions improved to 6-0 on the road and have won nine straight away from home going back to last year.

Brady was 27 of 41 for 345 yards, three touchdowns and a pair of second-half interceptions in falling to 2-2 in four career meetings against Mahomes, who built an early 17-0 lead and also had the Chiefs up by 17 entering the fourth quarter.

The Bucs made it close, with Brady throwing TD passes of 31 and 7 yards to Mike Evans, the latter trimming Tampa Bay’s deficit to 27-24 with 4:10 remaining.

Kansas City Chiefs wide receiver Tyreek Hill (10) runs into the end zone for a touchdown against the Las Vegas Raiders during the first half of an NFL football game, Sunday, Nov. 22, 2020, in Las Vegas. (AP PhotoDavid Becker)

The Bucs never got the ball back.

The Chiefs led 20-7 at halftime, with Hill having seven catches for 203 yards in the first quarter alone. The Bucs were fortunate they weren’t in a bigger hole at the break. Three drives inside the Bucs 20, however, only netted a pair of short field goals. Shaquil Barrett sacked Mahomes, forcing a fumble that William Gholston recovered at the 14 with the Chiefs looking to build on a 17-0 lead.

Bashaud Breeland and Tyrann Mathieu had Kansas City’s interceptions off Brady. The Chiefs hurt themselves with a pair of roughing the passer penalties on the 10-play, 73-yard drive the six-time Super Bowl champion put together to close the gap to three points. 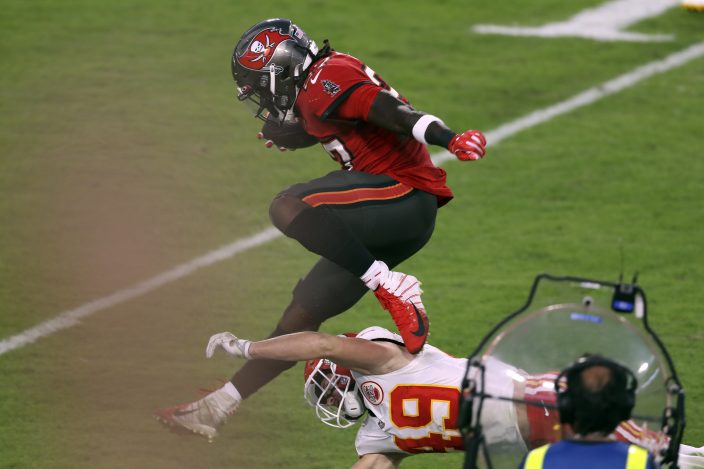 The Chiefs beat Tampa Bay for the first time since Sept. 5, 1993, when Joe Montana led Kansas City to a 27-3 victory. The Bucs had won five straight in a series the Chiefs lead 8-5.

Chiefs: WR Sammy Watkins returned after being sidelined since Week 5 with a hamstring injury. He had four receptions for 38 yards. ... LB Dorian O’Daniel suffered a right ankle injury in the first quarter and did not return.

Tampa Bay Buccaneers running back Ronald Jones III (27) celebrates with quarterback Tom Brady (12) after scoring on a 37-yard touchdown pass during the first half of an NFL football game against the Kansas City Chiefs Sunday, Nov. 29, 2020, in Tampa, Fla. (AP PhotoMark LoMoglio)

Buccaneers: LG Ali Marpet returned to the lineup after missing three games because of a concussion. LT Donovan Smith was active after not practicing all week and being listed as questionable with an ankle injury suffered last week against the Los Angeles Rams.

Chiefs: Denver next Sunday night, the lone home game during a stretch that’ll see Kansas City play four of five on the road. 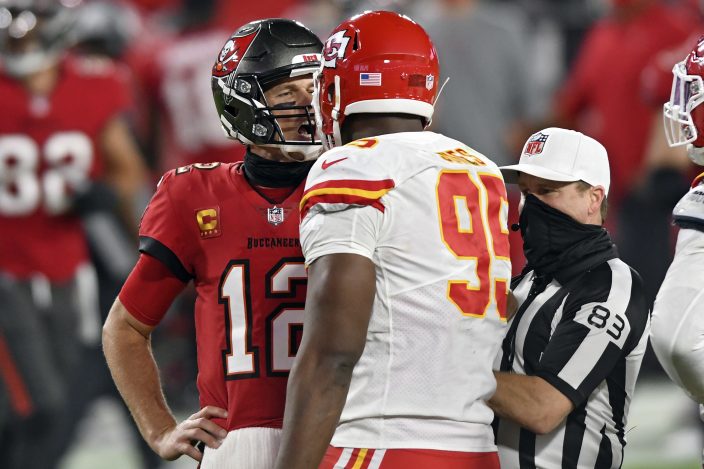 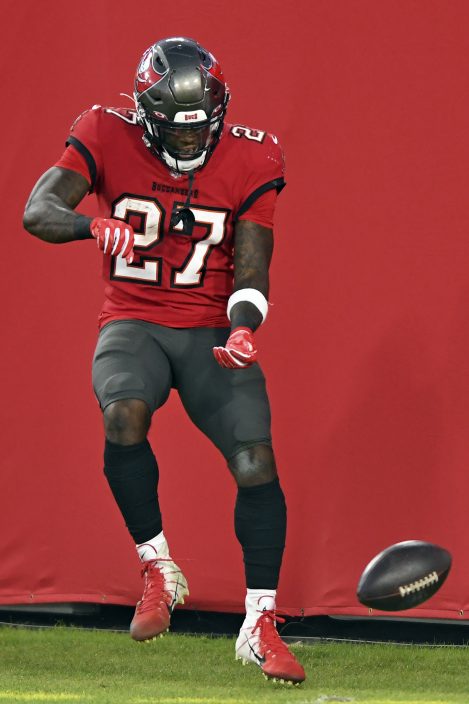 Tampa Bay Buccaneers running back Ronald Jones II (27) celebrates his score against the Kansas City Chiefs during the first half of an NFL football game Sunday, Nov. 29, 2020, in Tampa, Fla. (AP PhotoJason Behnken)