The Los Angeles Chargers added another chapter to their second-half woes on Sunday.

This time, they didn’t blow a lead in a 27-17 loss to the Buffalo Bills. But the Chargers found various ways to squander numerous scoring opportunities in a loss that featured a handful of questionable decisions.

“I’m not saying that it’s been perfect at all. But what happened today at the end of the game was miscommunication,” quarterback Justin Herbert said. 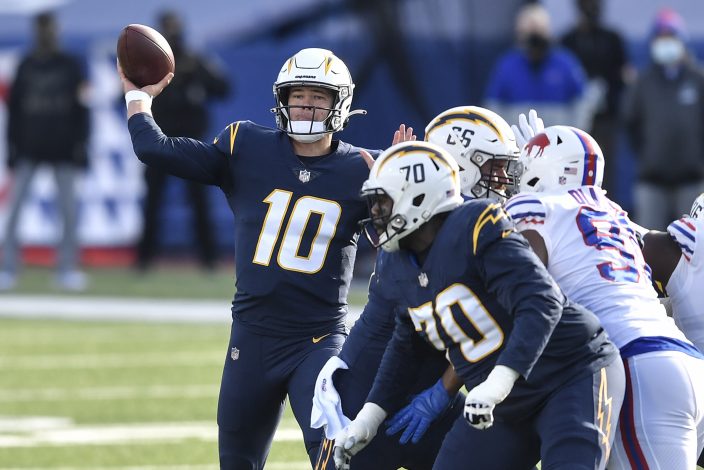 The Chargers (3-8) scored three points — Michael Badgley's 27-yard field goal — on their final five possessions, including three that ended inside Buffalo's 30. And they wasted a defensive effort in which the Chargers forced the Bills to turn over the ball on each of their first three possessions of the fourth quarter.

The troubles were encapsulated on an empty final possession for Los Angeles after it had first-and-goal at the Buffalo 2 with 25 seconds left — courtesy of Herbert's 55-yard pass to Tyron Johnson.

With no timeouts remaining, rather than spike the ball to stop the clock, Herbert handed off to Austin Ekeler, who was stopped at the 1. 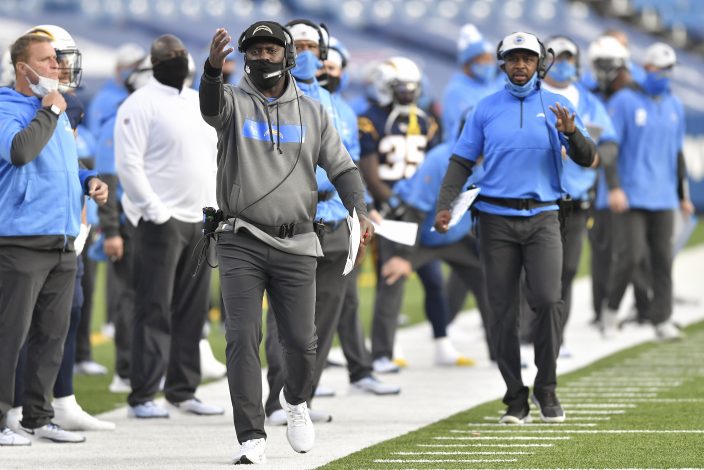 The clock ran down to 6 seconds when Herbert threw an incompletion. After initially sending out the field goal unit, the Chargers changed course and ran another play with the game ending on Herbert being stopped for a 2-yard loss.

And yet, the Chargers’ inability to finish has been a yearlong issue for a team that has been outscored by a combined 168-122 in the second half. It is 2-5 when leading at halftime.

The Chargers also gave up the ball on downs at Buffalo’s 26, when Ekeler was stopped for no gain on third-and-1 and Joshua Kelley lost a yard on fourth down.

Another drive, which began at LA’s 44 after Michael Davis intercepted Buffalo’s Josh Allen, ended three plays later when Herbert forced a pass over the middle that was intercepted by Tre’Davious White.

Herbert blamed himself, saying he and the offense spoiled what had been a sturdy defensive effort — led by Joey Bosa’s career-high three sacks and forced fumble.

“Offensively, we underperformed,” Herbert said. “Defense came up with big stops and turnovers. It’s on us and the offense.”

Herbert finished 31 of 51 for 316 yards and a touchdown. In upping his total to 3,015 yards passing, he joined Patrick Mahomes in becoming the NFL’s second player to top 3,000 yards in his first 10 starts. He also joined Andrew Luck in 2012 in becoming the second rookie to have six 300-yard passing games.

With his 5-yard touchdown pass to Keenan Allen, Herbert has thrown at least one in each of his first 10 starts, one short of matching the NFL record set by Washington’s Mark Rypien in 1988.

Bosa upped his career total to 47 1/2 sacks, moving into fifth place on the team list and a half-sack ahead of Junior Seau. But he didn't feel like celebrating his personal milestone.

“If you lose, you can do more,” Bosa said. “It (stinks). Really, really wanted to pull it out. Hard to feel excited after a tough game like that.”