Mitchell Trubisky couldn’t make the most of his second chance to lead the Chicago Bears’ offense.

And he didn’t get nearly enough help from a usually reliable Bears defense that delivered an uncharacteristically poor performance at the worst possible time.

Trubisky made his first start since the third week of the season Sunday night and threw three touchdown passes in a 41-25 loss to the Green Bay Packers. But he also committed three turnovers that led to Packers touchdowns as the Bears (5-6) fell three games behind Green Bay (8-3) in the NFC North. 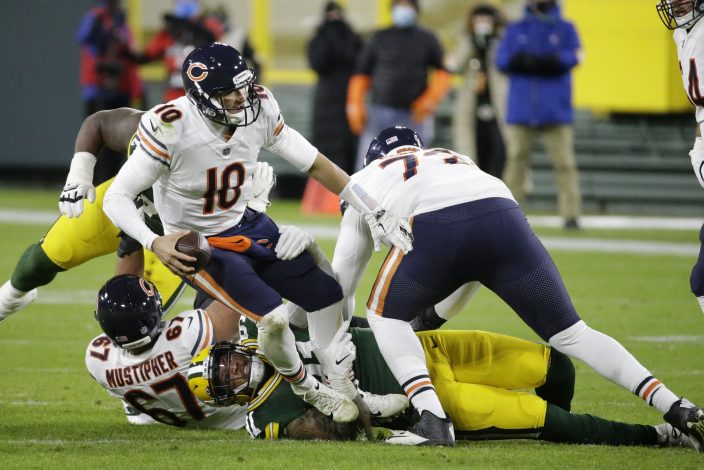 “I can’t take the offense off the field like that, with sudden changes, and just putting the ball in harm’s way,” said Trubisky, who went 26 of 46 for 242 yards. “You’re just not going to win games, or be in games, if you turn the ball over.”

Trubisky started the Bears’ first three games before getting benched in favor of Nick Foles, who rallied Chicago from a 16-point deficit at Atlanta in that third game but posted a 2-5 record as the starter.

Foles injured his hip and glute in a 19-13 loss to the Minnesota Vikings on Nov. 16. That cleared the way for the return of Trubisky.

Trubisky, the No. 2 overall pick in the 2017 draft made enough mistakes to show why he’d lost his hold on the starting job in the first place.

Chicago trailed 13-3 but had moved inside the Packers’ 40-yard line early in the second quarter when Trubisky threw deep to a well-covered Darnell Mooney in the end zone. Trubisky’s bid for a touchdown instead resulted in a touchback as Darnell Savage picked off the pass in the end zone.

“The safety made a good play over the top,” Trubisky said. “You’ve got to give him credit. But in hindsight definitely I would have liked to have checked that down, just not have forced it so much.”

Savage picked off another pass by Trubiskyin the third quarter.

In between those two interceptions was a critical fumble that pretty much sealed the Bears’ fate. Chicago was trying to narrow the deficit late in the first half when Za’Darius Smith sacked Trubisky and forced a fumble. Preston Smith picked up the ball and ran 14 yards for a touchdown that made it 27-3.

Replays appeared to show Za’Darius Smith grab a bit of Trubisky’s face mask, but no penalty was called.

While Green Bay’s defense made plenty of big plays against Trubisky, the Bears’ defense couldn’t slow down the Packers. The Packers built a 41-10 lead in the first three quarters against a Chicago defense that was missing injured tackle Akiem Hicks. Bears coach Matt Nagy said his team’s tackling got sloppy as the night wore on.

The Bears allowed 182 yards rushing and didn’t sack Aaron Rodgers once, even though Green Bay lost center Corey Linsley to a knee injury in the first half. That lack of pass rush allowed Rodgers to throw four touchdown passes.

“Very frustrating from my standpoint,” Bears outside linebacker Khalil Mack said. “That’s something that I take personally.”

The frustrations are starting to boil over for the Bears, who had such high hopes after winning five of their first six games. Now they’re below .500 with a five-game skid and an uncertain quarterback situation.

“It’s hard to win in this league,” Nagy said. “And when you lose and you lose five in a row, you are getting challenged big time. What’s easy to do, the easy way, is to just start pointing fingers and just say it’s not my fault. That’s what is easy to do. And unfortunately, right now, there’s a lot that do that. We’re not. We’re going to fight.”

Swelling after COVID-19 shots may cause cancer false al ...

Getting a mammogram or other cance ...