Inmates unhappy about the coronavirus threat at an overcrowded prison near Sri Lanka's capital have clashed with guards who opened fire, leaving six prisoners dead and 35 others injured, officials said Monday. Two guards were critically injured, they said.

Pandemic-related unrest has been growing in the country's prisons. Inmates have staged protests in recent weeks at several prisons as the number of coronavirus cases surges in the facilities.

More than a thousand inmates in five prisons have tested positive for the coronavirus and at least two have died. About 50 prison guards have also tested positive. 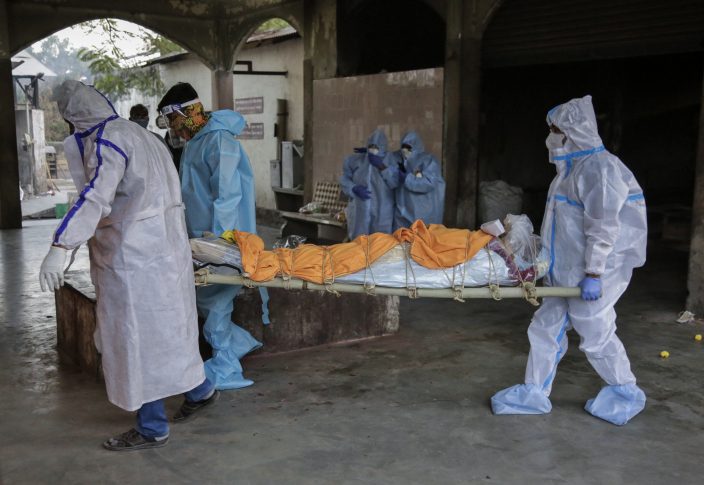 Relatives of a man who died of COVID-19 related complications, prepare to cremate his body at Vadaj Cemetery in Ahmedabad, India, Sunday, Nov. 29, 2020. India has more than 9 million cases of coronavirus, second behind the United States. (AP PhotoAjit Solanki)

Senaka Perera, a lawyer with the Committee for Protecting Rights of Prisoners, said the inmates at Mahara prison near Colombo had been frustrated because their pleas for coronavirus testing and separation of infected prisoners had been ignored by officials for more than a month.

Sri Lanka has experienced an upsurge in coronavirus cases since last month when two clusters — one centered at a garment factory and other at a fish market — emerged in Colombo and its suburbs.

Confirmed cases from the two clusters have reached 19,449. Sri Lanka has reported a total number of 22,988 coronavirus cases, including 109 fatalities. 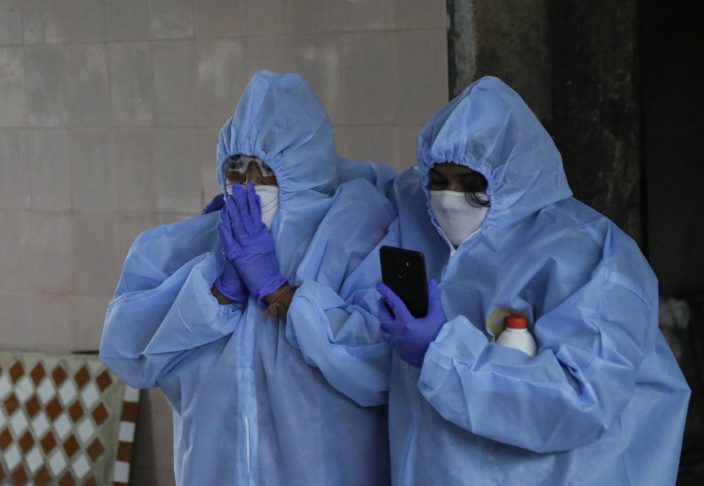 Relatives of a man who died of COVID-19 related complications, watch his cremation at Vadaj Cemetery in Ahmedabad, India, Sunday, Nov. 29, 2020. India has more than 9 million cases of coronavirus, second behind the United States. (AP PhotoAjit Solanki)

— Cambodia’s Education Ministry is ordering all schools to close after a rare local outbreak of the coronavirus. It says public schools will remain shut until until Jan. 11, the start of the next school year, while private schools must close for two weeks. Officials said over the weekend that a family of six and another man tested positive for the coronavirus. Eight more cases were reported Monday among residents of Phnom Penh who were in contact with the family. Prime Minister Hun Sen expressed concern that the woman believed to be the source of the outbreak had traveled extensively in the country. About 3,300 people in seven provinces who were found to have had contact with the family are having themselves tested, the ministry said. Also on Monday, the Culture and Fine Arts Ministry announced the closure of all theaters and museums and the prohibition of public concerts for the next two weeks. Cambodia has reported only 323 cases of the virus since the pandemic began, most of them acquired abroad, with no confirmed deaths.

— India has recorded 38,772 new coronavirus cases in the past 24 hours, driving its overall total to 9.43 million. The health ministry on Monday also reported 443 deaths in the same period, raising the death toll to 137,139. India continues to have one of the lowest deaths per million population globally, the health ministry said in a statement. It also said that focused measures to ensure a low and manageable fatality rate have resulted in daily mortality figures of less than 500. For more than three weeks now India’s single-day cases have remained below the 50,000 mark. The capital, New Delhi, has also seen a dip in daily infections. It reported fewer than 5,000 new cases for the second consecutive day. On Sunday, it recorded 68 deaths, driving the capital’s total to 9,066. India is second behind the U.S. in total coronavirus cases. In an effort to slow the virus’s spread, the home ministry has allowed states to impose local restrictions such as night curfews but has asked them to consult before imposing lockdowns at state, district or city levels.