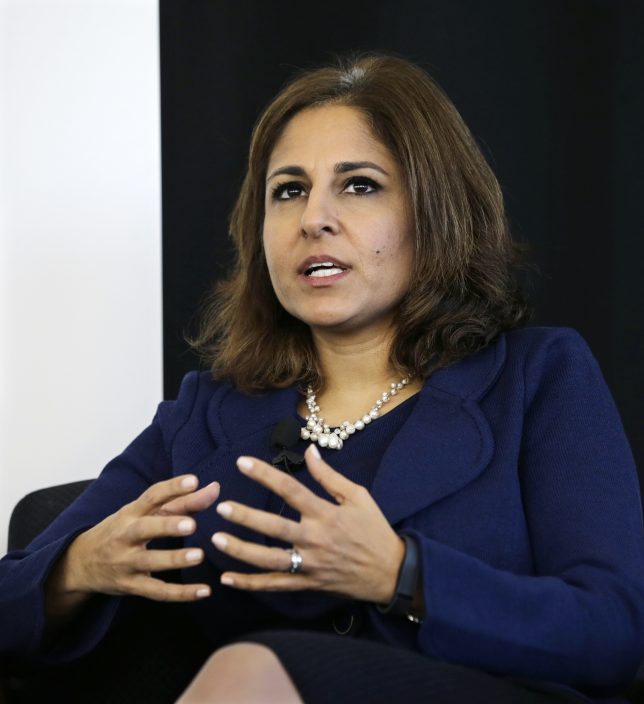 FILE - In this Monday, Nov. 10, 2014, file photo, Neera Tanden, president of Center for American Progress, speaks during an introduction for New Start New Jersey at NJIT in Newark, N.J. President-elect Joe Biden is expected to name several of his most senior economic advisers in the coming days. Tanden could be one of those named. (AP PhotoMel Evans, File)

AMERICAN HOSTAGES-THE BEATLES —As two Islamic State militants faced a judge in Virginia, Diane Foley listened from home and strained to make out the voices of the men prosecutors say kidnapped her son before he was murdered. Alexanda Kotey and El Shafee Elsheikh stand accused of belonging to an IS cell dubbed “the Beatles,” an incongruously lighthearted nickname for British citizens blamed for the jailing, torture and murder of Western hostages in Syria. After geopolitical breakthroughs and stalemates, military actions in Syria and court fights in London, the Justice Department’s most significant terrorism prosecution in years was finally underway. By Eric Tucker. SENT: 1,690 words, photos, video. A shorter version is also available.

Sri Lankan inmates of the Mahara prison come out from a damaged building following an overnight unrest in Mahara, outskirts of Colombo, Sri Lanka, Monday, Nov. 30, 2020. Sri Lankan officials say six inmates were killed and 35 others were injured when guards opened fire to control a riot at a prison on the outskirts of the capital. Two guards were critically injured. Pandemic-related unrest has been growing in Sri Lanka's overcrowded prisons. (AP PhotoEranga Jayawardena)

CONGRESS RETURNS — After months of shadowboxing amid a tense and toxic campaign, Congress’ main players are returning to Capitol Hill for one final, perhaps futile, attempt at deal making on a challenging menu of year-end business. By Andrew Taylor. SENT: 870 words, photos.

BIDEN-ECONOMIC TEAM — President-elect Joe Biden is expected in the coming days to name several of his most senior economic advisers, a group that includes several liberal economists and policy specialists who established their credentials during the previous two Democratic administrations. By Aamer Madhani. SENT: 550 words, photos.

TRUMP-VIRUS-WHITE HOUSE — A Pennsylvania state senator abruptly left a West Wing meeting with President Donald Trump after being informed he had tested positive for the coronavirus, a person with direct knowledge of the meeting told The Associated Press. By Mark Scolforo. SENT: 740 words, photos. WITH: TRUMP-FACT CHECK — Trump has clung to false notions that Biden stole the presidential election, citing thousands of votes magically switched to the president-elect and poll watchers illegally barred on Election Day, neither of which happened. SENT: 1,120 words, photos.

IRAN — Iran has begun a funeral for a recently killed scientist who founded the Islamic Republic’s military nuclear program in the early 2000s. Iran has blamed Israel for the attack. Israel, long suspected of killing Iranian nuclear scientists over the last decade, has declined to comment on the killing. SENT: 620 words, photos, developing.

US-WORD-OF-THE-YEAR-MERRIAM-WEBSTER — If you were to choose a word that rose above most in 2020, which word would it be? Ding, ding, ding: Merriam-Webster announced “pandemic” as its 2020 word of the year. SENT: 620 words, photo.

INDONESIA-VOLCANO ERUPTS — A volcano in eastern Indonesia has erupted, sending a column of ash as high as 4,000 meters (13,120 feet) into the sky and prompting the evacuation of nearly 2,800 people. SENT: 230 words.

EU-VIRUS-OUTBREAK-BRITAIN-SMALL-BUSINESS-STRUGGLES — On a bustling street in east London, shops are scrambling to adapt to the pandemic and survive. SENT: 1,200 words, photos.

VIRUS-OUTBREAK-NEW-YORK — New York City will reopen its school system to in-person learning and increase the number of days a week many children attend class even as the coronavirus pandemic intensifies in the city. SENT: 790 words, photo, video.

BIDEN-STAFF — Biden will have an all-female senior communications team at his White House, reflecting his stated desire to build out a diverse White House team as well as what’s expected to be a return to a more traditional press operation. SENT: 700 words, photos. WITH: BIDEN-FOOT — Biden will likely wear a walking boot for several weeks after breaking his right foot while playing with one of his dogs, officials say. SENT: 300 words, photos.

HONG KONG-PRO-DEMOCRACY LAWMAKER — After nearly three decades in politics, Wu Chi-wai. chairman of Hong Kong’s largest pro-democracy party is stepping down as a lawmaker while urging supporters to rethink how to continue their fight for change. All 15 lawmakers in the pro-democracy camp have tendered their resignations to protest a Beijing resolution in early November that led to the disqualifications of four of their colleagues. SENT: 730 words, photos.

SRI LANKA-PRISON RIOT — Officials say six inmates were killed and 35 others were injured when guards opened fire to control a riot at a prison on the outskirts of Sri Lanka’s capital. Pandemic-related unrest has been growing in Sri Lanka’s overcrowded prisons where inmates have staged protests in recent weeks. SENT: 390 words, photos.

VATICAN-CARDINAL PELL — Cardinal George Pell, who was convicted and then acquitted of sexual abuse in his native Australia, reflects on Pope Francis’ papacy and the humiliations of solitary confinement in his jailhouse memoir. SENT: 940 words, photo.

AUSTRALIA-CHINA-GRAPHIC-TWEET — Australia’s prime minister says a tweet by a Chinese official which shows a fake image of an Australian soldier appearing to slit a child’s throat is “truly repugnant.” SENT: 410 words, photo.

FINANCIAL-MARKETS — Asian shares are lower on renewed caution despite a record high finish on Wall Street last week driven by hopes for a COVID-19 vaccine and relief for the global economy. SENT: 540 words, photos.

CHINA-MANUFACTURING — A survey shows China’s manufacturing activity accelerated in November as its rebound from the pandemic gained strength while the United States and Europe struggled with rising infections and renewed controls on business. SENT: 250 words, photos.

FILM-BOX OFFICE — Testing a novel release strategy, Universal Pictures’ animated sequel “The Croods: A New Age” had one of the best opening weekends of the pandemic, grossing $14.2 million over the five-day Thanksgiving holiday weekend, according to studio estimates. SENT: 450 words, photos.