The pachyderm dubbed the “ world’s loneliest elephant ” after languishing alone for years in a Pakistani zoo was greeted on his arrival in Cambodia on Monday by chanting Buddhist monks and was then sent on his way to a wildlife sanctuary.

Like other travelers during these times, Kaavan needed to be tested for COVID-19 before his flight. Once his large metal crate was safely on board, Kaavan was provided with in-flight snacks — 200 kilograms (440 pounds) of them — for the seven-hour journey.

Kaavan was not stressed during the flight, eating his food and even getting a little bit of sleep standing in his crate, said Amir Khalil, a veterinarian who accompanied him on the flight and works with Four Paws, the Vienna-headquartered animal rescue group that organized the move. 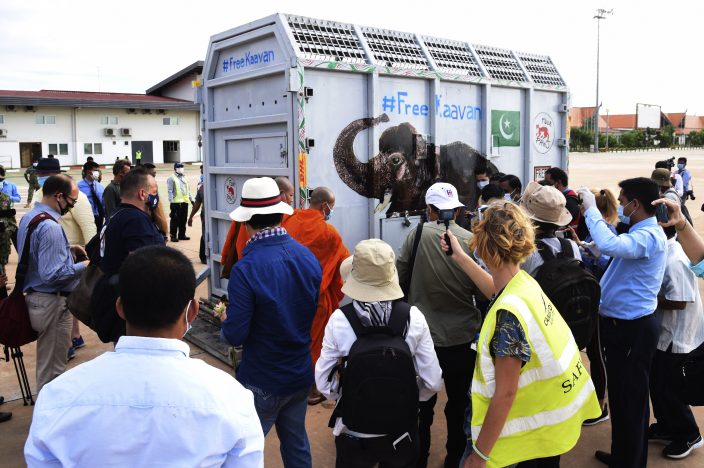 A shipping container holding Kaavan the elephant arrivals from Pakistan at the Siem Reap International Airport, Cambodia, Monday, Nov. 30, 2020. Kaavan, dubbed the "world's loneliest elephant" after languishing alone for years in a Pakistani zoo, has arrived in Cambodia where a sanctuary with the much-needed company of other elephants awaits him. (Pool Photo via AP)

“He behaves like a frequent flier. The flight was uneventful, which is all you can ask for when you transfer an elephant,” Khalil said.

The 36-year-old, 4,080 kilogram (9,000 pound) elephant received a warm welcome on arrival in Cambodia from officials, conservationists and the Buddhist monks, who chanted prayers for his harmony and prosperity.

Kaavan, a 1985 gift from Sri Lanka to Pakistan, had been living in the Marghazar Zoo in Islamabad with his partner Saheli, who died in 2012. The zoo fell on hard times and conditions got so bad that a court in the Pakistani capital ordered the zoo closed in August. 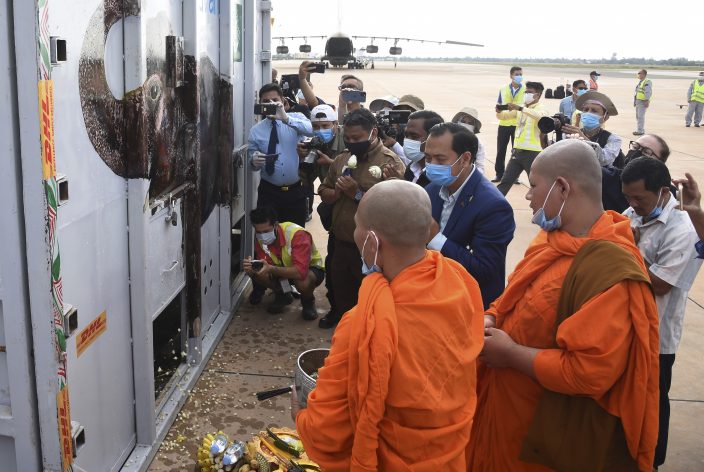 Neth Pheaktra, center, Spokesmen of Environment Ministry, presides over the blessing of a container holding Kaavan the elephant during its arrival from Pakistan at the Siem Reap International Airport, Cambodia, Monday, Nov. 30, 2020. Kaavan, dubbed the "world's loneliest elephant" after languishing alone for years in a Pakistani zoo, has arrived in Cambodia where a sanctuary with the much-needed company of other elephants awaits him. (Pool Photo via AP)

The plight of the male Asian elephant has captured worldwide attention, including from the American singer and actor Cher, who has been closely involved in his rescue and was in Cambodia for Kaavan's arrival.

Cher’s animal welfare group Free the Wild has worked with Four Paws and the American syndicated columnist and philanthropist, Eric Margolis, to relocate Kaavan — a mission that’s cost about $400,000.

According to Four Paws, very few adult elephants have ever been relocated by plane, so preparations were arduous. 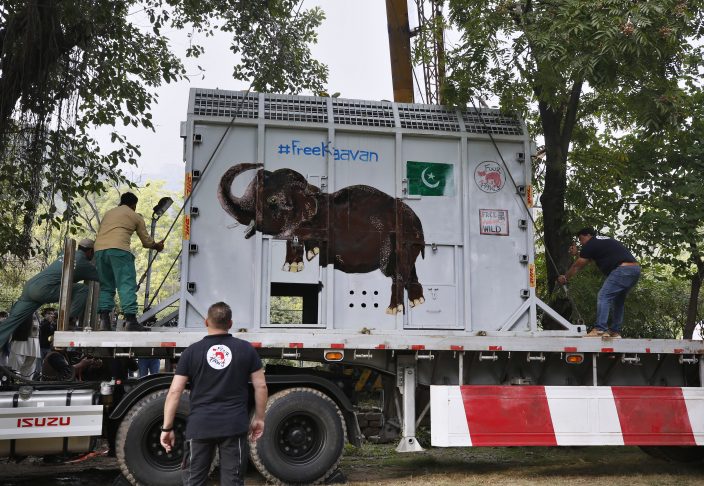 Pakistani wildlife workers and experts from the international animal welfare organization Four Paws, secure a crate carrying an elephant named Kaavan on a truck before transporting him to a sanctuary in Cambodia, at the Marghazar Zoo in Islamabad, Pakistan, Sunday, Nov. 29, 2020. Kavaan, the world's loneliest elephant, became a cause celebre in part because America's iconic singer and actress Cher joined the battle to save him from his desperate conditions at the zoo. (AP PhotoAnjum Naveed)

Veterinarians and elephant experts working for Four Paws spent three months in Islamabad, coaching Kaavan three times a day on how to enter and exit safely and without stress his four-ton travel crate, which includes a system that can hold up to 200 liters (53 gallons) of urine.

He was also dangerously overweight due to his unsuitable diet of around 250 kilograms (550 pounds) of sugar cane each day. With Khalil’s help, Kaavan lost 1,000 pounds (450 kilograms) over the past three months.

Kaavan’s wounds are emotional as well as physical. He would spend his days throwing his head from side to side, a stereotypical sign of boredom and misery in an elephant, said Martin Bauer, a spokesman for Four Paws.

The loss of his mate Saheli took a toll on Kaavan’s mental health. Elephants are social animals that thrive on the company of other elephants, Bauer explained. For Kaavan, the last eight years have been akin to living in quarantine — something the world has come to understand all too well amid the coronavirus pandemic, he said.

Late Monday, Kaaven was being driven by truck to a camp in northern Cambodia where he should be able to leave his crate on Tuesday.

“Once Kaavan feels at home in a controlled setting, he will be released in a wildlife sanctuary, in Oddar Meanchey province, in the northern section of Cambodia, where some 600 Asian elephants live in peace and tranquility," said a statement from Neth Pheaktra, a spokesman for the Environment Ministry. “Pachyderms can live for many years and even at 36, we hope that he will contribute to the gene pool.”

A close ally of Venezuelan Preside ...