The German soccer federation is sticking with Joachim Löw as coach of the national team despite the 6-0 loss to Spain.

The federation said Monday that its management agreed in a conference call that Löw, who has been in charge since taking over after the 2006 World Cup, should “unreservedly continue” with the team.

“A single game cannot and must not be a yardstick for the general performance of the national team and the national coach,” the federation said, referring to the match against Spain in the Nations League on Nov. 17. 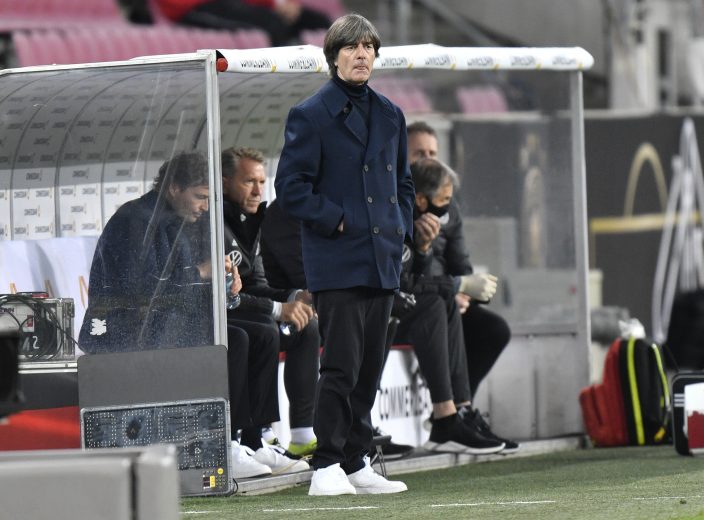 File - In this Tuesday, Oct. 13, 2020 file photo, Germany's head coach Joachim Loew reacts during the UEFA Nations League soccer match between Germany and Switzerland in Cologne, Germany. The German soccer federation is sticking with Joachim Löw as coach of the national men's team despite poor results including a chastening 6-0 defeat to Spain. (AP PhotoMartin Meissner, file)

The federation said Löw informed the members of the executive committee of his assessments, ideas and plans for the European Championship, which was postponed until next year because of the coronavirus pandemic.

Germany was drawn into a tough group with France, Portugal and Hungary for Euro 2020, which will be held in June 2021.

Löw led Germany to the World Cup title in 2014, but his reputation took a hit following the team’s poor title defense in Russia and no clear upward trend since.

Löw dropped stalwarts Thomas Müller, Mats Hummels and Jérôme Boateng, but their younger replacements have failed to live up to expectations and the team has been prone to costly mistakes.