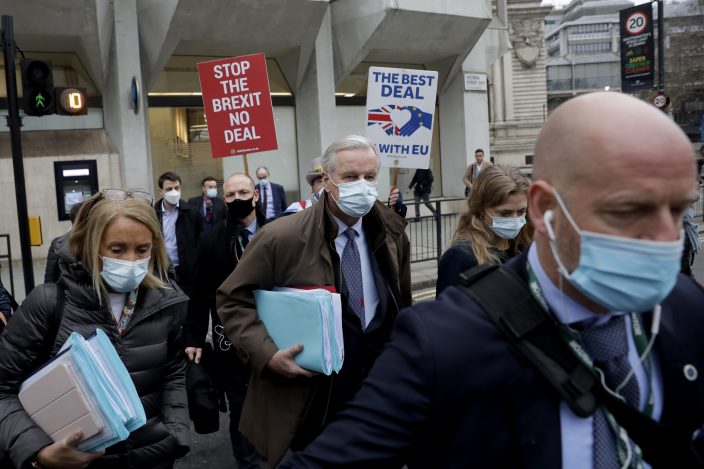 FOREIGN INFLUENCE-STRAW DONOR— Imaad Zuberi, an elite political fundraiser, had the ear of top Democrats and Republicans alike — a reach that included private meetings with then-Vice President Joe Biden and VIP access at Donald Trump’s inauguration. But federal prosecutors say Zuberi’s life was built on a series of lies and the lucrative enterprise of filling the campaign coffers of American politicians and profiting from the resulting influence. SENT: 3,300 words, photo. With an abridged version, SENT: 1,000 words, photo. With: FOREIGN-INFLUENCE-STRAW-DONOR-TAKEAWAYS— 5 takeaways: Top donor sold access for foreign cash. SENT: 400 words.

AMERICAN HOSTAGES-THE BEATLES — Alexanda Kotey and El Shafee Elsheikh stand accused of belonging to an IS cell dubbed “the Beatles,” an incongruously lighthearted nickname for British citizens blamed for the jailing, torture and murder of Western hostages in Syria. After geopolitical breakthroughs and stalemates, military actions in Syria and court fights in London, the Justice Department’s most significant terrorism prosecution in years was finally underway. By Eric Tucker. SENT: 1,690 words, photos, video. A shorter version is also available. 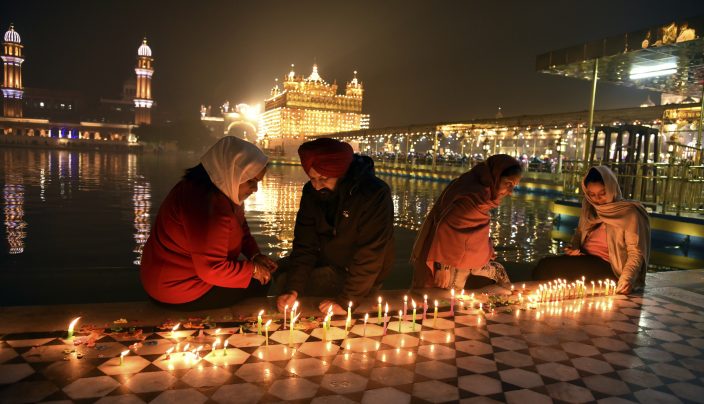 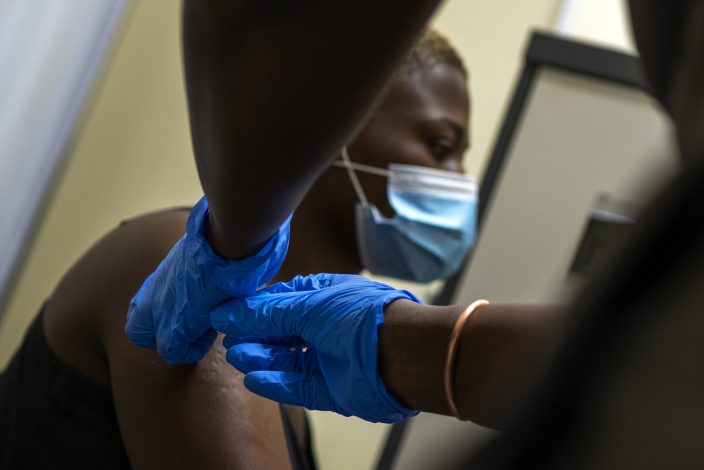 VIRUS OUTBREAK-US SURGE — Americans returning from Thanksgiving break face strict new coronavirus measures around the U.S. amid fears from health officials that holiday gatherings and travel over the weekend will worsen the already out-of-control surge of infections. By Tammy Webber. UPCOMING: 700 words, photos, by 3 p.m.

CONGRESS RETURNS — After months of shadowboxing amid a tense and toxic campaign, Capitol Hill’s main players are returning for one final, perhaps futile, attempt at deal-making on a challenging menu of year-end business. COVID-19 relief, a $1.4 trillion catchall spending package, and defense policy — and a final burst of judicial nominees — dominate a truncated two- or three-week session as the coronavirus pandemic rockets out of control in President Donald Trump’s final weeks in office. By Andrew Taylor. SENT: 900 words, photos. 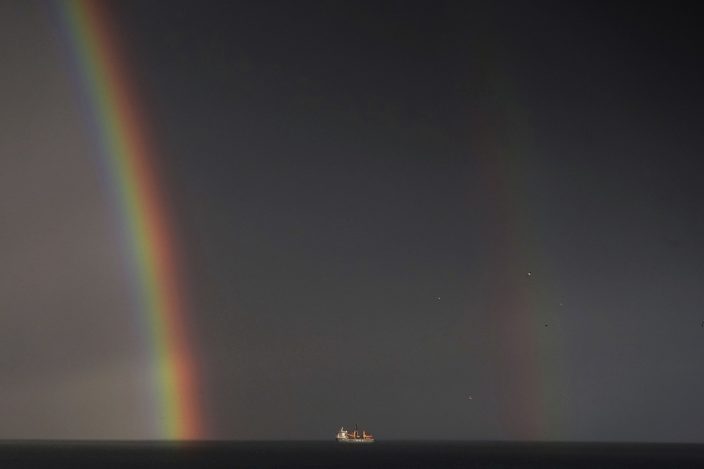 SUPREME COURT-2020 CENSUS — During oral arguments, justices seem skeptical that President Donald Trump can categorically exclude people living in the country illegally from the population count used to allot seats among the states in the House of Representatives. But it’s possible they could avoid a final ruling on the issue until they know how broadly the Trump administration acts in its final days in office and whether the division of House seats is affected. By Mark Sherman. SENT: 600 words. UPCOMING: 800 words by 4 p.m., photos, video.

VIRUS OUTBREAK-VACCINE FRAUD PREVENTION — The coronavirus vaccine inching toward approval in the U.S. is desperately anticipated by weary Americans longing for a path back to normal life. But criminals are waiting, too, ready to use that desperation to their advantage, federal investigators say. By Colleen Long. SENT: 1,000 words, photos. With VIRUS OUTBREAK-VACCINE FRAUD PREVENTION-BOX. 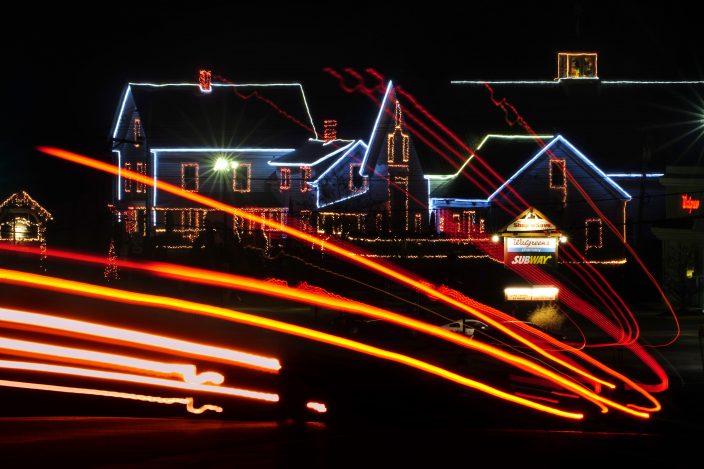 In this image taken with a slow shutter speed, early morning traffic leaves streaks of light as it passes the Naples Barn, an antique and gift shop outlined with holiday lights, Monday, Nov. 30, 2020, in Naples, Maine. Brick and mortar shops like the Naples Barn will be competing with online stores as shoppers look holiday gifts on Cyber Monday. (AP PhotoRobert F. Bukaty)

VATICAN-CARDINAL PELL — Cardinal George Pell, who was convicted and then acquitted of sexual abuse in his native Australia, reflects on Pope Francis’ papacy and the humiliations of solitary confinement in his jailhouse memoir. SENT: 940 words, photo.

VIRUS OUTBREAK-ONE-GOOD-THING-ARTIST-BUYING-ART — Painter Guy Stanley Philoche, a star in the New York art world, had wanted to treat himself to a fancy watch after a hugely successful gallery show. Then the pandemic hit, and he feared for all the struggling artists who haven’t been so lucky. So he gave up his $15,000 Rolex dreams and went on a different kind of buying spree. Philoche has spent about $60,000 so far and plans to continue as long as he can. SENT: 600 words, photos.

VIRUS OUTBREAK-BRITAIN-SMALL BUSINESS STRUGGLES — Small businesses all over the world are struggling as the virus forces many to close outright while also remaking consumer habits, but many in the U.K. are facing the double whammy of the pandemic and the economic uncertainty caused by Britain’s exit from the European Union. SENT: 1,200 words, photos.

VIRUS OUTBREAK-TURKEY — Turkey’s president has announced the most widespread lockdown so far amid a surge in COVID-19 infections, extending curfews to weeknights and putting full lockdowns in place over the weekends. The new measures begin Tuesday. SENT: 370 words, photos.

GREECE-VIRUS OUTBREAK-PRICE CAPS — Greece’s largest medical association has criticized a decision by the country’s center-right government to impose price caps on coronavirus tests at private labs, warning that the measure could disrupt testing during a spike in infections. SENT: 200 words, photo.

BIDEN-INTELLIGENCE — Joe Biden gets his first sobering look as president-elect at the President’s Daily Brief, a top secret summary of intelligence and world events. Biden had access to the so-called PDB as vice president during the Obama years, but a lot has changed since he last had access four years ago. By Deb Riechmann and Zeke Miller. SENT: 370 words. UPCOMING: 880 words by 5 p.m., photos.

BIDEN-PRESIDENTIAL PETS — Major Biden is getting an early start on his time in the spotlight as a presidential pet after the dog got tangled up with his owner and left President-elect Joe Biden with a broken foot. Over the decades, presidential pets have been a source of comfort, entertainment, drama and generally good PR for their owners. Pets will be returning to the White House after a four-year hiatus during the Trump administration. By Kevin Freking. UPCOMING: 750 words by 5 p.m., photos.

KUSHNER-GULF — President Donald Trump’s son-in-law and adviser Jared Kushner will travel to Saudi Arabia and Qatar this week as part of negotiations to end a longtime boycott of Qatar. SENT: 200 words, photo.

FRANCE-POLICE — Lawmakers from French President Emmanuel Macron’s party will rewrite the most criticized article of a proposed security law, involving a measure aimed at banning the publication of images of police officers with intent to cause them harm. The move comes after tens of thousands of protesters marched Saturday across the country to reject the draft law. SENT: 225 words, photo. With: FRANCE-WATCHING-THE-POLICE — French activists fear that a proposed new security law will deprive them of a potent weapon against abuse — cellphone videos of police activity — threatening efforts to document police brutality, especially in impoverished immigrant neighborhoods. SENT: 890 words, photos.

ETHIOPIA-MILITARY CONFRONTATION — The fugitive leader of Ethiopia’s defiant Tigray region is calling on Prime Minister Abiy Ahmed to “stop the madness” and withdraw troops from the region as he asserted that fighting continues “on every front” despite Abiy’s claim of victory. SENT: 580 words, photos.

NATO-AFGHANISTAN — NATO Secretary-General Jens Stoltenberg said that the military alliance is grappling with a dilemma over its future in Afghanistan, as the United States starts pulling troops out while attacks by the Taliban and extremist groups mount. SENT: 570 words, photos.

YEMEN — Artillery fire has killed at least 11 civilians, including four children, near Yemen’s strategic port city of Hodeida amid that country’s grinding war. That’s according to the international charity Save the Children, which gave the toll for Sunday’s violence. SENT: 300 words.

BRITAIN-SCOTTISH INDEPENDENCE — Scotland’s leader says she hopes to hold an independence referendum as soon as next year. The announcement sets up a political showdown with the U.K. government, which refuses to countenance a secession vote. SENT: 400 words, photo.

THAILAND-PROTESTS — Five leaders of Thailand’s pro-democracy movement have reported to police to acknowledge charges that they defamed the king, the most serious of many offenses of which they stand accused. SENT: 580 words, photos.

EUROPE-MIGRANTS — Spain has dismantled most of the temporary camp for migrant processing that became known as the “dock of shame” for holding in unfit conditions thousands of Africans arriving in the Canary Islands. SENT: 350 words.

HAWAII-CORRUPTION-SENTENCING — A once-respected, now-estranged power couple are scheduled to be sentenced in Hawaii’s biggest corruption case. A jury convicted Katherine and Louis Kealoha of conspiracy in a plot to frame her uncle to keep him from revealing fraud that financed their fancy lives. She’s a former high-ranking prosecutor and he was a Honolulu police chief who retired after becoming a target of the federal investigation. SENT: 480 words, photo. UPCOMING: 750 words after sentencing hearing.

EXECUTION-SOUTH-CAROLINA — South Carolina prison officials say they have to delay an execution scheduled for Friday because they won’t be able to obtain the lethal injection drugs needed. SENT: 470 words.

ALZHEIMER-BLOOD-TEST — A company has started selling the first blood test to help diagnose Alzheimer’s disease, a leap for the field that could make it much easier for people to learn whether they have dementia. It also raises concern about the accuracy and impact of such life-altering news. SENT: 850 words, photos.

CYBER MONDAY — With people staying home as virus cases surge, Cyber Monday is expected to be the biggest online shopping day yet, bringing in nearly $13 billion in one day. By Joseph Pisani. UPCOMING: 600 words by 3 p.m.

AIRLINES-HOLIDAY TRAVEL — The TSA says nearly 1.2 million people went through U.S. airports on Sunday. That’s the highest number since the coronavirus pandemic gripped the country back in March. And the uptick came despite the pleadings of public health experts for people to stay home over Thanksgiving to limit further spreading the virus. SENT: 180 words, photo.

IHS-MARKIT-BUYOUT — The value that Wall Street places on access to billions of bytes of data, rather than old-school stock picking, became abundantly clear as two of the biggest providers of such information become one in the biggest takeover of the year. S&P Global announced that it would acquire IHS Markit, based in London, for about $44 billion in an all-stock deal. SENT: 380 words, photos.

FINANCIAL MARKETS — Stocks are falling in the early going on Wall Street as traders return from the Thanksgiving holiday, but major indexes are still on track for hefty monthly gains. SENT: 420 words, photos. UPCOMING: Will be updated through market close, about 700 words by 2 p.m.

BOOKS-JOHN-HEILEMANN — The co-author of the million-selling “Game Change” has a book of his own coming about the 2020 election. John Heilemann is working on a first-hand account of Joe Biden’s victorious campaigns over his Democratic Party rivals in the primaries and over President Donald Trump in the general election. SENT: 360 words, photos.

FBN--SEAHAWKS-EAGLES — Russell Wilson leads the Seattle Seahawks (7-3) against a Philadelphia Eagles team that is 3-6-1 but still very much in the mix to win the woeful NFC East. By Pro Football Writer Rob Maaddi. UPCOMING: 750 words, photos. Game starts 8:15 p.m.

FBN--RAVENS-STEELERS PREVIEW -- The COVID-19 ravaged Ravens are scheduled to play the unbeaten Pittsburgh Steelers on Tuesday. Though, given the uncertain nature of the outbreak in Baltimore, nothing is guaranteed. By Will Graves. UPCOMING: 700 words, photo by 5 p.m.

OLY—TOKYO-DELAY COSTS — Olympic organizers decline to confirm widely circulated reports in Japan that the cost of the one-year postponement will be about $3 billion. By Stephen Wade. SENT: 650 words, photos.

BKN-NBA-CAMPS— For the Miami Heat and Los Angeles Lakers, it was the shortest offseason ever. For eight other teams, it was the offseason that lasted longer than most seasons. Either way, it’s back-to-work time in the NBA with training camps -- sort of, anyway -- to open Tuesday. By Basketball Writer Tim Reynolds. UPCOMING: 700 words, photos by 4 p.m. EST.