Matt Rhule hit the nail on the head when he said he and his coaching staff deserve full blame for the Panthers surrendering an 11-point fourth quarter lead and losing 28-27 to the Vikings on Sunday.

Carolina (4-8) botched this game — and a chance to climb into the playoff hunt.

"As a coaching staff, we didn’t get the job done (Sunday),” Rhule said. “Anytime you have two defensive touchdowns and you don’t win, it’s on you. Anytime that you hold them to 55 yards (rushing), it’s on us as a staff. To not be able to put the game away with the ball at the 10-yard line with two minutes left is unacceptable by us as a staff. To not to be able to stop them and then not be able to make the field goal at the end with a chance to win the game – we had three opportunities to close it out and we did not.” 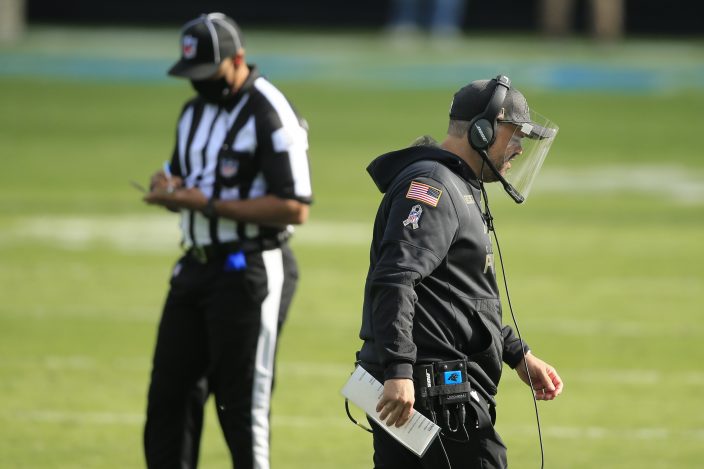 Carolina Panthers head coach Matt Rhule walks on the field against the Tampa Bay Buccaneers during the first half of an NFL football game, Sunday, Nov. 15, 2020, in Charlotte , N.C. (AP PhotoBrian Blanco)

Clock management has been an issue all season.

Leading by three, Carolina recovered a muffed punt at the Vikings 9 with 2:10 remaining. After two runs came up short, the Panthers faced a third-and-goal at the 3. But despite a Vikings timeout after the second-down play, offensive coordinator Joe Brady was slow in getting the play call into the huddle.

The Panthers hurried to the line and Teddy Bridgewater's pass in the end zone sailed behind D.J. Moore. The Panthers kicked a short field goal, and then watched the Vikings drive 75 yards for the winning touchdown. 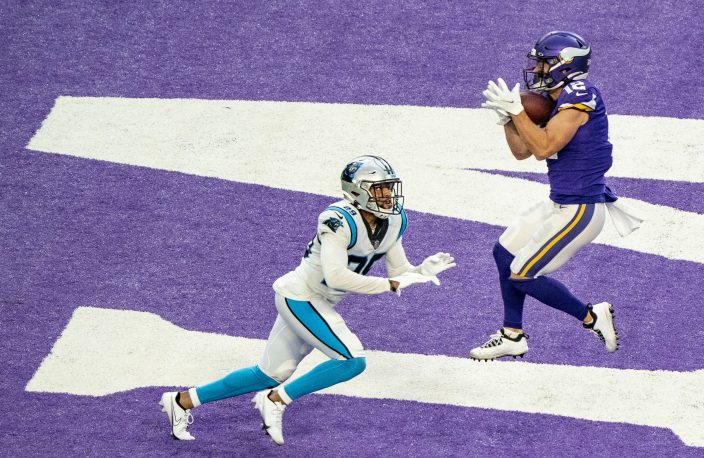 Bridgewater said the Panthers “panicked a little bit” not knowing whether to run or pass on third down.

“We just didn’t have enough time to execute," Bridgewater said. “It was a play where we wanted to shift Robby (Anderson) to get a good man/zone read to see what defense they’re in. Because we’re against the clock we just had to rush into it.”

The result was another frustrating loss. 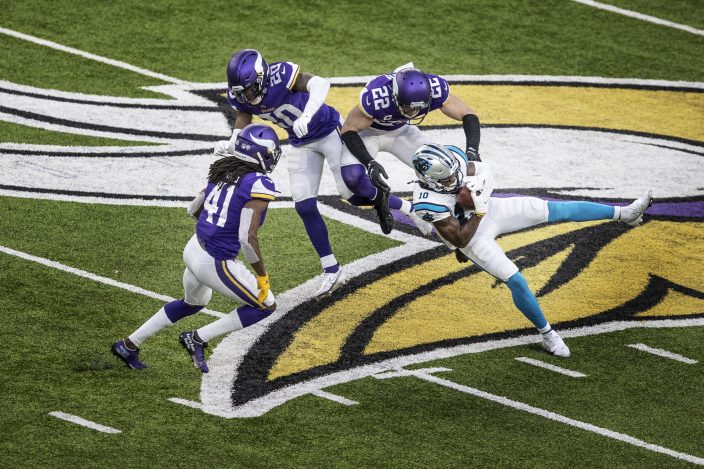 Carolina’s running game was working well early on with Mike Davis, Rodney Smith and Trenton Cannon ripping off 10-plus yard gains. The problem is the drives didn’t result in enough points after Bridgewater threw an interception in the red zone and Joey Slye missed a field goal. The Panthers finished with 107 yards on 28 carries, but it seemed they went away from the run game too early, particularly in the fourth quarter when they were trying to close out the Vikings. 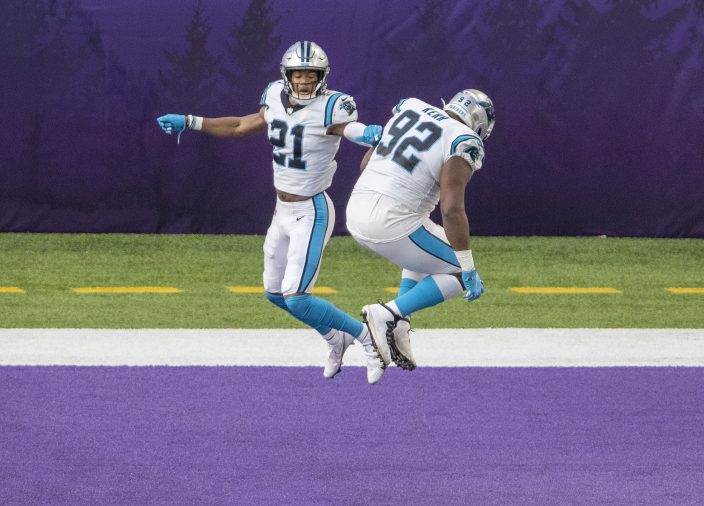 Carolina Panthers' Jeremy Chinn (21) celebrates after returning a fumble by Minnesota Vikings' Dalvin Cook for a touchdown in the third quarter of an NFL football game in Minneapolis, Sunday, Nov. 29, 2020. (Carlos GonzalezStar Tribune via AP)

Bridgewater had yet another chance to win a game for the Panthers with the ball in his hands in the final minutes, only to fail again. Bridgewater’s failure to execute a pass to an open Moore on third-and-goal late in the game and essentially finish off the Vikings’ coffin is a microcosm of what has been happening all season in Carolina. Bridgewater was unable to come up with the big play when the Panthers needed it most and fell to 3-8 this season.

Panthers rookie linebacker/safety Jeremy Chinn became the first player in NFL history to score defensive touchdowns on back-to-back plays from scrimmage, returning two fumbles for touchdowns. Chinn is in contention for NFL Defensive Rookie of the Year honors; he entered the game leading all rookies in tackles, and added 13 more to that total.

Slye has a reputation for having a big leg, but the second-year kicker has struggled from long range. He's 1 of 6 on field goal attempts of 50 yards or more, including missing a 54-yard attempt at the end of regulation.

“A 54-yarder is something that should be in my wheelhouse and should be somewhat of a kick that’s a higher percentage,” Slye said.

Moore injured his lower leg on that late-game incompletion and hobbled off the field. Rhule offered no update on Moore’s status of if he'll be ready to play after the bye week. Also, Bridgewater injured his left arm on Carolina’s final offensive play of the game, but said afterward he was “fine.”

3 — Number of games Christian McCaffrey has played in this season. The 2019 All-Pro running back has scored six touchdowns in those games. He’s expected to return to action after Carolina’s bye next week, although it is likely too late to save the season.

If the Panthers decided to make a change at quarterback to P.J. Walker, who is 1-0 as a starter, or 2019 third-round draft pick Will Grier, now would be the time to do it as the team has an extra week to prepare because of the bye week.