Kristie Mewis became the unexpected star of U.S. women’s soccer this year and in the process showed the power of perseverance.

With the Houston Dash, she won the National Women's Soccer League's Challenge Cup tournament this summer in Utah. Then in October, she got an invitation to the national team's camp in Colorado. That culminated with a roster spot for the U.S. team's final match of the year against the Netherlands.

She scored in the 2019 World Cup rematch, which the United States won 2-0. 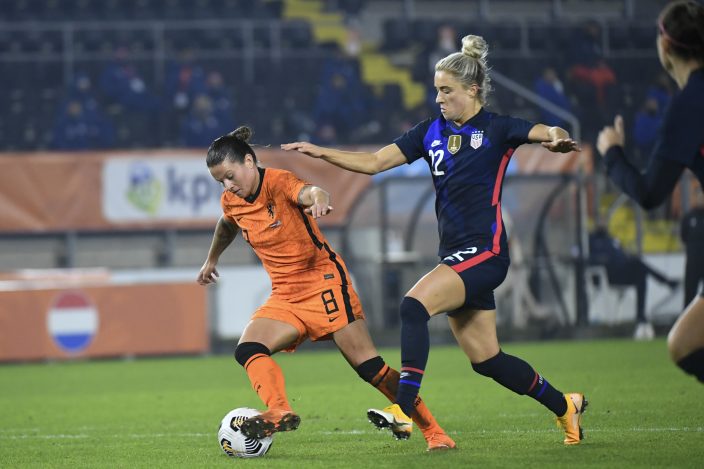 Netherlands' Sherida Spitse, left, and United States Kristie Mewis vie for the ball during the international friendly women's soccer match between The Netherlands and the US at the Rat Verlegh stadium in Breda, southern Netherlands, Friday Nov. 27, 2020. (Piroschka van de WouwPool via AP)

“If you look at the players that are in the United States and compete in the NWSL, 2020 is Kristie Mewis’ year," said U.S. coach Vlatko Andonovski. "And I’m just glad that she capped it off with a nice goal.”

The goal on Friday was important in a lot of ways for Kristie, who broke into the national team in 2013 but then fell out of favor. Making her first appearance for the team in six years, she set a national team record with 2,722 days between goals.

“I did have a couple of years there as a spectator, and it’s always so fun to watch them play. But always in the back of my mind, I did want to get back here, and I did want to play for this team again,” she said 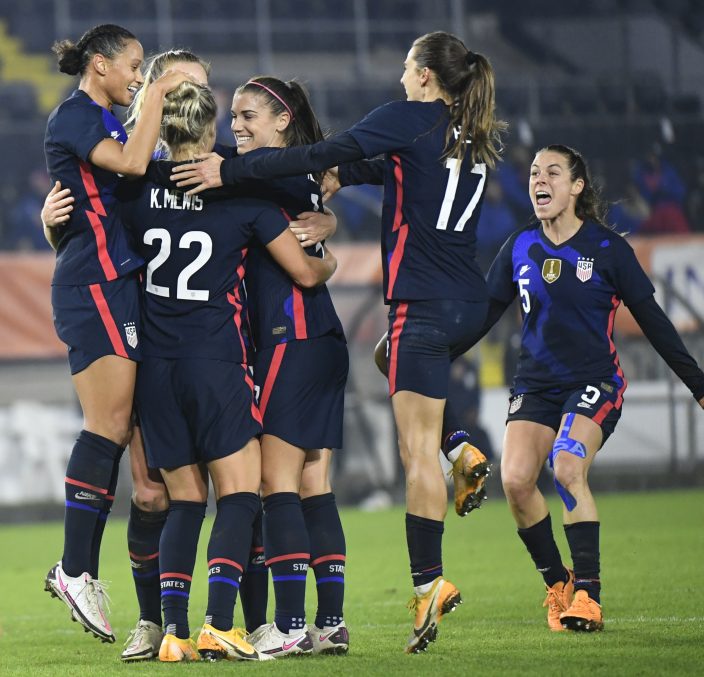 Kristie, 29, is the older sister of midfielder Sam Mewis, who was on the U.S. team that won the World Cup last year in France. The two grew up in Massachusetts, with Kristie becoming a standout at Boston College while Sam went to UCLA. They went on to pro careers, both in the NWSL and abroad.

In 2013 and 2014, Kristie made more than a dozen appearances with the national team. Then the call-ups stopped. While Sam's star rose, Kristie continued her pro career in the NWSL.

A serious knee injury sidelined her for much of 2018 but she mounted a comeback in 2019, starting in 20 games for the Dash with four goals and an assist. Houston struggled, however, finishing second-to-last in the league. 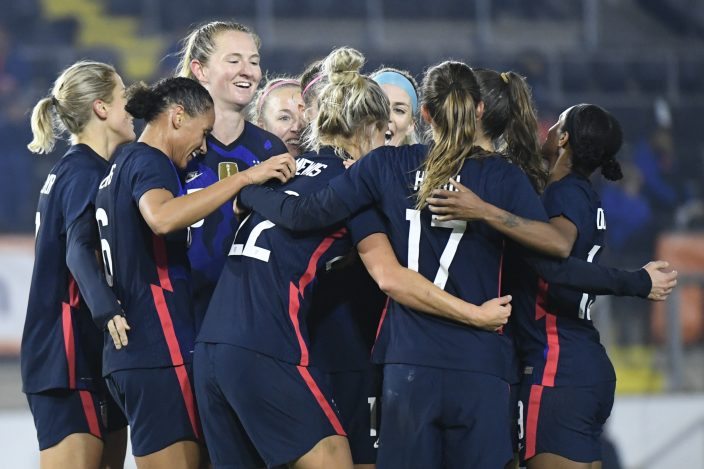 After the 2020 season was canceled because of the coronavirus, the NWSL became the first professional team sport to return in the United States with the Challenge Cup. The Dash wound up the surprise winners, besting the Chicago Red Stars 2-0 in the final.

The Dash were the loveable underdogs with no World Cup winners on the roster. Kristie and teammates Shea Groom and Rachel Daly helped Houston to its first ever trophy.

Kristie went to Andonovski's October camp after a series of regional NWSL games this fall, leading to an invite to the Netherlands where she joined Sam in camp and on the field.

“Just to see her over the past couple of years, have her knee injury and then come back to really great form this past year and even the year before, to just see her go through that adversity and then come back and play so well, and prove that she’s a really valuable player for both Houston and hopefully now here for the national team,” Sam said. “I’m just really excited for her and I know that she has worked so hard for this.”

Kristie has found an advocate in Andonovski, who drafted her in 2013 when he was the coach of FC Kansas City.

“That was my first draft ever in the NWSL," said Andonovski, who took over the national team after Jill Ellis stepped down last year. “Obviously very happy for her to see her going through some adversity and coming back to this team and taking full advantage of the opportunity. She was very good in camp, trained very well and deserves to be on the field.”

The national team was undefeated this year while playing a schedule that was abbreviated because of the coronavirus. The group expects to reconvene for its traditional January camp, and the delayed Olympics loom next summer. The United States has already won a spot in the field for Tokyo.

"Obviously, I need to continue now to grow and get better because I think I can still improve so much as a player," she said, “so that I am able to hopefully stay here with this team for as long as I can.”