After a string of injuries to key players, several coronavirus cases and other bad breaks, the San Francisco 49ers somehow find themselves still in the NFC playoff race heading into December.

Now they must face a whole new challenge after Santa Clara County issued strict new coronavirus protocols that will force the Niners to become vagabonds the next three weeks by practicing and playing away from home.

The 49ers (5-6) got that news just before heading to Los Angeles over the weekend and they managed to push it aside enough to beat the Rams 23-20 to move within one game of the final playoff spot. 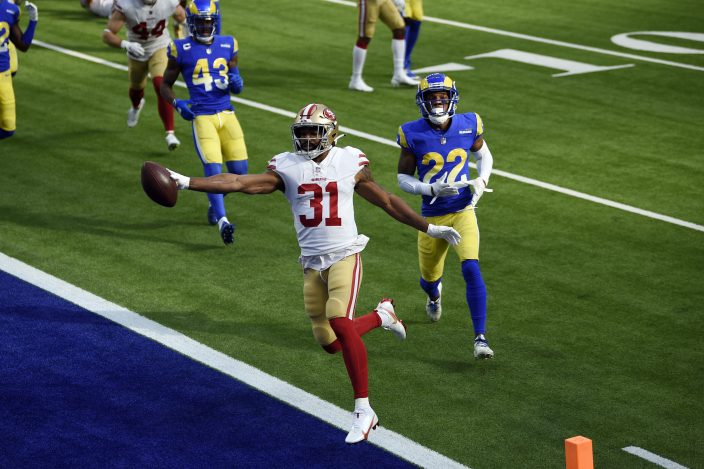 San Francisco 49ers running back Raheem Mostert scores a rushing touchdown against the Los Angeles Rams during the first half of an NFL football game Sunday, Nov. 29, 2020, in Inglewood, Calif. (AP PhotoKelvin Kuo)

“I can’t be more proud of our team,” coach Kyle Shanahan said after the game. “What they’ve gone through all year, but especially these last two weeks and especially these last 24 hours. I did have a lot of concern because some of the stuff all of us and our families have been dealing with. I can’t tell you how proud I am of those guys, how they went out there and fought. Not all of it was perfect, but their heart and energy and everything was. I couldn’t ask for any more from those guys.”

But with Sherman, Samuel and Mostert returning Sunday from injuries and all making big contributions, the Niners are hoping they can stay in contention long enough for a few more key players like Garoppolo and possibly even Kittle to return.

They will have to do it on the road with the team announcing Monday it will play the next two “home” games in Arizona at the Cardinals' stadium in response to a three-week ban of contact sport practices and games in Santa Clara County.

The Niners will also need to find a new place to practice, and the players are prepared for a long stretch away from their families.

“No matter what we go through, we’re a team and we truly believe that we’re going to take care of each other and look after each other,” Mostert said.

Samuel after the catch. Samuel returned after missing three games with a hamstring injury and had 11 catches for 133 yards. He gained 136 of those yards after the catch — he had minus-3 yards at the catch, with several behind the line of scrimmage — according to SportRadar, the second most in a game by a wide receiver since 2010 to the 147 Demaryius Thomas had for Denver against Arizona in 2013. Samuel forced seven missed tackles with his physical running style, according to Pro Football Focus.

Third-down offense. San Francisco went only 3 for 14 (21.4%) on third downs for its third-lowest conversion rate of the season. The Niners converted only one third down that needed more than 2 yards, missed on two short-yardage tries and went 0 for 5 when needing between 3 and 7 yards. Nick Mullens was 3 for 8 for 46 yards on third downs.

Robert Saleh. The Niners defensive coordinator who figures to be a hot coaching candidate in the offseason has done a brilliant job running a unit that has been missing Bosa and fellow edge rusher Dee Ford almost all season. San Francisco generated four takeaways and allowed only one offensive touchdown to the Rams.

Offensive line. The Niners were overmatched up front against the Rams with rookie Colton McKivitz and fill-in center Daniel Brunskill struggling to slow down Aaron Donald, and right tackle Mike McGlinchey also getting beaten a few times. The Niners allowed two sacks and averaged only 3.5 yards per carry.

Slot cornerback Jamar Taylor was lost to a knee injury that Shanahan feared could be season ending. Taylor had replaced K’Waun Williams, who remains sidelined by a knee injury.

58_The Niners will go at least 58 full days without a home game thanks to the new regulations. They hosted Green Bay on Nov. 5 and aren’t scheduled to play again at Levi’s Stadium until the season finale against Seattle on Jan. 3.

The Niners play the Bills on Monday night in Arizona.

Concussion substitutes will be tri ...

49ers playing out the string 1 year after Super Bowl run

Loss leaves 49ers with no margin for error in playoff run

Injury-riddled 49ers head into bye week after loss to Saints

Losses mount for 49ers on field and with injuries

49ers get back into groove headed into showdown in Seattle