Even facing the league’s worst defense couldn’t help the Philadelphia Eagles figure out their offensive woes.

Carson Wentz had another rough game and his teammates didn’t provide much support in a 23-17 loss to the Seattle Seahawks on Monday night. 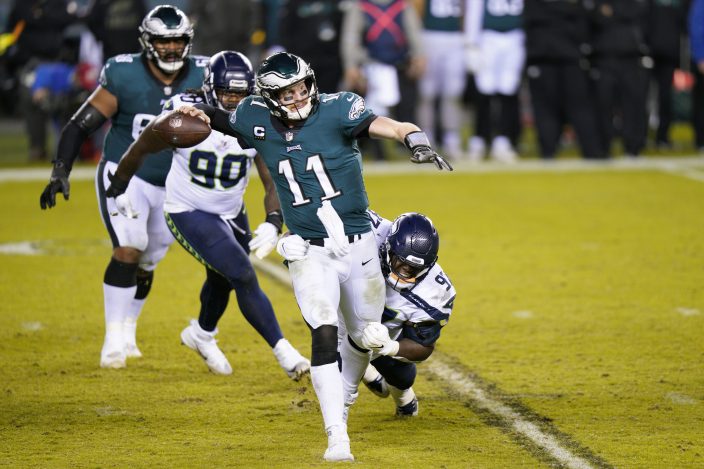 All of it added up to a measly 250 total yards against a defense that came in allowing a league-high 434.9 yards, including a league-worst 343.7 yards passing.

Wentz was 25 of 45 for 215 yards, two TDs and one interception. Following a week of speculation that rookie backup Jalen Hurts would get more playing time, it didn’t happen. Hurts played two snaps and threw one pass, a completion. 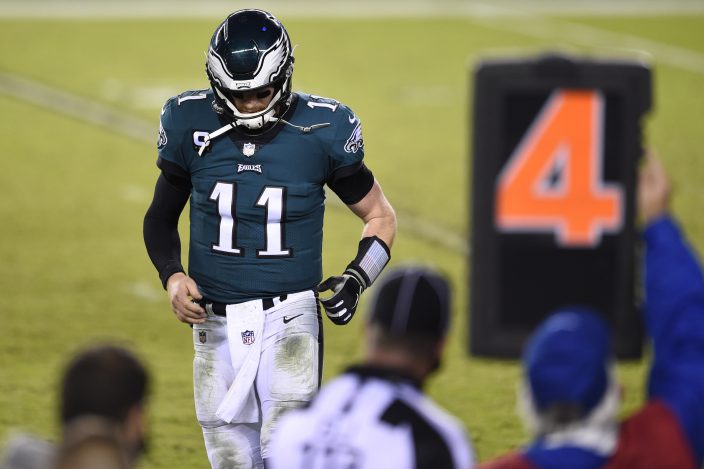 Philadelphia Eagles' Carson Wentz walks off the field during the second half of an NFL football game against the Seattle Seahawks, Monday, Nov. 30, 2020, in Philadelphia. (AP PhotoDerik Hamilton)

“It’s not about one guy,” coach Doug Pederson said. “We had breakdowns across the board. It doesn’t matter who was back there, the mistakes were gonna be made and it’s something we have to fix.”

The Eagles went three-and-out on their first five drives. They didn’t get a first down until Wentz ran for 20 yards with under five minutes left in the first half.

“I can be better early,” Wentz said. “Slow starts are frustrating.” 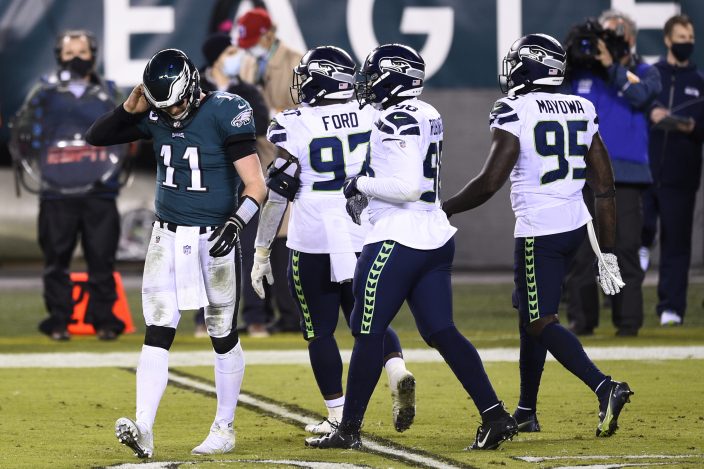 Philadelphia Eagles' Carson Wentz walks off the field during the second half of an NFL football game against the Seattle Seahawks, Monday, Nov. 30, 2020, in Philadelphia. (AP PhotoDerik Hamilton)

Pederson defended going for fourth-and-4 from the Seahawks 15 down 11 points in the fourth quarter, saying the team needed to “stay aggressive.” Wentz’s pass went straight to Seattle’s Quandre Diggs as Dallas Goedert turned the other way on the route.

“I’ll take the blame,” Goedert said. “I knew the ball was coming to me. I was trying to do too much.”

Wentz was sacked six times and got hit numerous times.

“We have battled with a lot of injury, a lot of moving parts,” Pederson said. “We haven’t had the consistency and continuity you would like. We don’t make excuses for it. We have to get better.”

The Eagles (3-7-1) would be playing for draft positioning in most seasons with such a poor record but they’re only a half-game behind the Giants (4-7) and Washington in the woeful NFC East.

“I’m frustrated. I hate losing,” Wentz said. “But the crazy thing is this division is wide open and guys know that. We’re looking ahead to next week, getting this thing turned around, getting going in the right direction and hopefully surprise some people.”