UNITED NATIONS — Nobel Peace Prize laureate Nadia Murad says the COVID-19 pandemic has increased trafficking of women and gender-based violence, leaving the health and safety of women “on the line.”

The 27-year-old activist, who was forced into sexual slavery by Islamic State fighters in Iraq, said curfews, lockdowns and travel restrictions imposed by governments to slow the spread of the virus “have had unintended consequences on women worldwide.”

“Rather than reducing human trafficking and gender-based violence, the pandemic has increased the risk of exploitation and brutality against those most vulnerable,” she said. “Numerous countries have seen increases in reports of domestic violence since the pandemic began.” 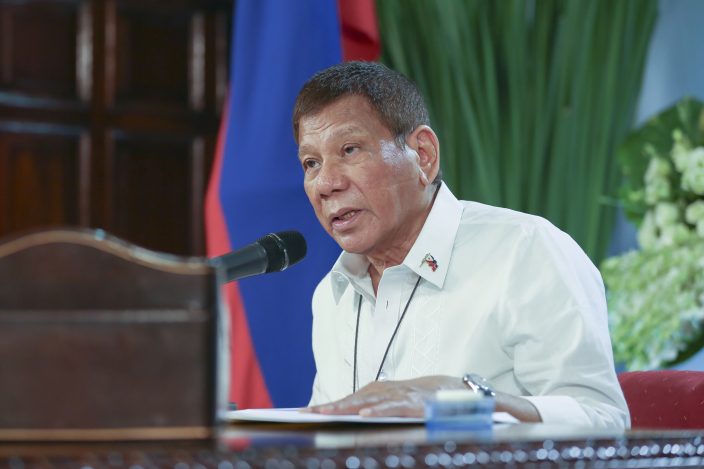 In this handout photo provided by the Malacanang Presidential Photographers Division, Philippine President Rodrigo Duterte speaks as he meets members of the Inter-Agency Task Force on the Emerging Infectious Diseases at the Malacanang presidential palace in Manila, Philippines on Monday Nov. 30, 2020. Coronavirus quarantine restrictions will remain imposed in the Philippine capital during the Christmas season this month and officials said they will ban big Christmas parties in Asia's largest Roman Catholic nation to prevent new infection spikes. (Karl Norman AlonzoMalacanang Presidential Photographers Division via AP)

“The few resources designated for prevention, rescue and rehabilitation are being stretched thin,” she said. “As a result, women’s health and safety are on the line. It is now difficult for many women to access psychological support (and) health care.”

A member of Iraq’s Yazidi minority, Murad was among thousands of women and girls who were captured and forced into sexual slavery by Islamic State extremists in 2014. Her mother and six brothers were killed by Islamic State fighters. She became an activist on behalf of women and girls after escaping and finding refuge in Germany, and shared the Nobel Peace Prize in 2018. 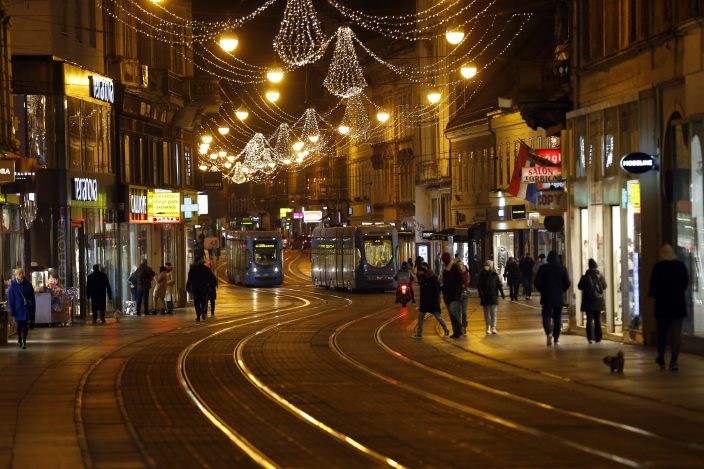 Pedestrians and trams on the street decorated with Christmas lights in downtown Zagreb, Croatia, Monday, Nov. 30, 2020. Most of Advent activities in the city have been cancelled due to Covid-19 pandemic. (AP PhotoDarko Bandic)

Murad spoke virtually at a U.N. meeting on Monday entitled “Locked Down and Locked-In: Standing Against Sexual Violence and Human Trafficking during the COVID-19 Pandemic.”

— Moderna asking US, European regulators to OK its virus shots

— Fauci: US may see ‘surge upon surge’ of virus in coming weeks after Thanksgiving travel

— U.K. stocks up on vaccines, hopes to start virus shots within days

Health authorities ordered 137 people who had been in close contact with the man to stay in a central quarantine facility and shut down an English center where the man works as a teacher, the newspaper said.

Vietnam’s borders remain closed in an attempt to keep out the virus. Only limited international flights are operating to repatriate Vietnamese nationals and transport foreign diplomats and experts.

The country has reported 1,347 coronavirus cases, including 35 deaths. Nearly half of the confirmed cases were imported, according to the Health Ministry.

President Rodrigo Duterte said in televised remarks late Monday that aside from Metropolitan Manila, the bustling capital region of more than 12 million, the “general community quarantine” would be imposed in seven other cities and provinces in December.

The restrictions ban large public gatherings, actual school classes and entertainment businesses but allow shopping malls, restaurants and essential shops, including barber shops, to operate with required safeguards, including the wearing of face masks and shields and social distancing.

Duterte lamented that many still defy quarantine restrictions like the wearing of face masks and warned of a possible resurgence of infections like in some Western countries.

The Philippines has reported more than 431,600 confirmed coronavirus infections, the second-highest in Southeast Asia, with at least 8,392 deaths.

UNITED NATIONS -- The head of the world’s largest humanitarian network is urging governments and institutions to combat “fake news” about COVID-19 vaccines which has become “a second pandemic” and start building trust in communities around the world about the critical importance of vaccinating people.

Francesco Rocca, president of the International Federation of Red Cross and Red Crescent Societies, said in a virtual briefing to the U.N. Correspondents Association on Monday that “to beat this pandemic, we also have to defeat the parallel pandemic of distrust.”

He said there is “a growing hesitancy about vaccines in general, and about a COVID vaccine in particular” around the world, pointing to a recent Johns Hopkins University study in 67 countries that found vaccine acceptance declined significantly in most countries from July to October this year.

He stressed that the lack of trust “is by no means a Western phenomenon,” citing the federation’s research in recent months in eight African countries -- Congo, Cameroon, Gabon, Zimbabwe, Sierra Leone, Rwanda, Lesotho and Kenya -- which showed a steady decline in the perceptions of the risk of COVID-19 infection.

A growing number of people indicated the virus doesn’t affect young people or Africans, that the disease doesn’t exist now but did exist and the pandemic has ended, he said. “In several African countries, we have seen a common skepticism towards vaccines in general, with a common belief being that foreigners use Africa as a medical ‘testing ground.’”

SACRAMENTO, Calif. — California could see a tripling of hospitalizations by Christmas and is considering stay-home orders for areas with the highest case rates as it tries to head off concerns that severe coronavirus cases could overwhelm intensive care beds, officials said Monday.

“The red flags are flying in terms of the trajectory in our projections of growth,” said Gov. Gavin Newsom. “If these trends continue, we’re going to have to take much more dramatic, arguably drastic, action.”

Hospitalizations have increased 89% over the past 14 days and nearly 7,800 coronavirus patients were hospitalized as of Monday. About 12% of Californians testing positive are likely to need hospital care within the next two to three weeks.

The biggest concern is intensive care cases, which have increased 67% in the past two weeks. If that continues, it would push ICU beds to 112% of capacity by mid-December.

That statistic is likely to drive state-mandated stay-at-home orders in 51 of California’s 58 counties that already are seeing the most restrictions on business activities, said Dr. Mark Ghaly, the state’s secretary of health and human services.

Deputy Prime Minister and Finance Minister Chrystia Freeland says the country is facing its most severe challenge since the second World War, the worst economic shock since the Great Depression and the worse health crisis since the Spanish flu over a century ago.

The cost to date has the federal deficit reaching a record $381.6 billion Canadian (US$294 billion) this year, but the government says it could close in on $400 billion Canadian (US$308 billion) if widespread lockdowns return in the coming weeks. Toronto, Canada’s largest city, is on lockdown.

The government’s fall economic update proposes to send extra child-benefit payments to families next year. The government is proposing $25 billion Canadian (US$19 billion) in new spending.