The Denver Broncos could have avoided the quarterback quagmire they got stuck in over the weekend had they only embraced the notion of a “quarantined QB” that was championed by the likes of the Buffalo Bills and Philadelphia Eagles last summer.

Coach Vic Fangio deemed as overkill that pandemic precaution back in training camp.

So, after the NFL disqualified all of his quarterbacks over coronavirus concerns, Fangio had to turn to a rookie receiver on his practice squad who played quarterback in college but hadn’t taken any snaps at practice in the pros. 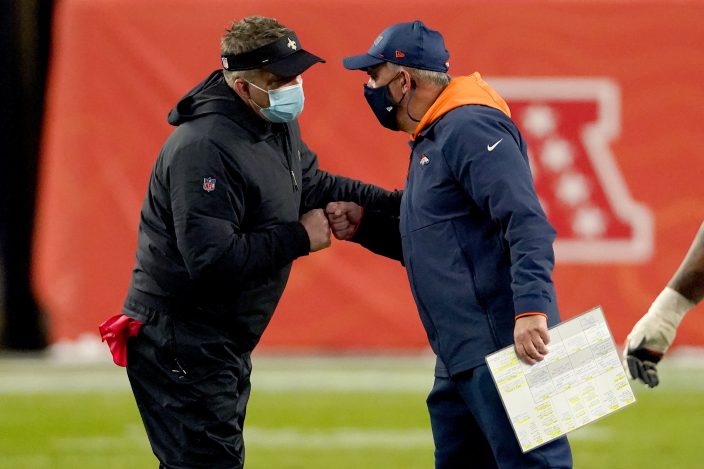 It was no surprise then that Kendall Hinton completed more passes to the Saints (two) than to the Broncos (one) in Denver’s 31-3 loss to New Orleans in which he posted a passer rating of zero.

“I don’t think it’s necessary, to be honest with you,” Fangio said back on Sept. 3 when asked about the concept of a quarantined quarterback in case his QB room got wiped out by COVID-19.

“Plus, it has to be with the right guy, somebody that has experience in your system that if the emergency happens you have them there,” Fangio continued. “Our quarterbacks have been meeting together all camp. They’re socially distanced like they should be. I think most teams are doing that. There hasn’t been an issue so far, knock on wood.”

That good fortune ran out Saturday when the NFL disqualified Drew Lock, his backup Brett Rypien and practice squad veteran Blake Bortles for having been maskless around No. 3 QB Jeff Driskel before he tested positive for COVID-19 on Thanksgiving morning.

The Broncos’ pleas to have their game against New Orleans pushed back a day or two to give them a fighting chance were rejected by the league. The NFL’s medical team deemed the COVID-19 exposure in Denver was contained to the team’s quarterbacks room, unlike the Baltimore Ravens’ roster-wide virus outbreak that’s led the NFL to postpone their trip to Pittsburgh three times.

The Ravens are now scheduled to play their game against the Steelers on Wednesday afternoon, six days after it was supposed to the main course of the NFL’s Thanksgiving triple-header.

Denied a 48-hour reprieve and the chance to prepare a new passer or even to get Lock, Rypien and/or Bortles back in time to make it a fair fight, the Broncos turned to Hinton, who played quarterback at Wake Forest before switching to wide receiver last year.

Hinton was cut by the Broncos after training camp and a month ago was spending his days pitching products, not passing or catching footballs. He’d taken a job selling candy bars and other merchandise to high schools for fundraisers when he was summoned back to Denver for a $4,447 weekly practice squad paycheck.

This week, he’ll get a $35,882 game check for taking it on the chin for the Broncos, completing just one of nine passes for 13 yards against the Saints.

One of the worst performances in modern NFL history drew props, not pillory.

“Mad respect & props 4 @Kendall_Hinton2 ... I don’t care stats or score, this young man did nothing but battle w/the crappy hand he was dealt!” tweeted Hall of Famer Kurt Warner.

“A lot of respect for this guy,” Saints linebacker Demario Davis tweeted after the game. “He handled this situation like a real pro. I can only imagine the range of emotions and mental download he went through in 24 hrs.”

It’s what the Bills are doing with rookie Jake Fromm, who’s on their 53-man roster but working only remotely, and what the Eagles did with veteran journeyman Josh McCown for two months before he was signed to the Texans’ active roster a few weeks ago.

Asked Monday if the Broncos had discussed isolating Bortles once the quarterbacks are cleared to return, Fangio said, “We haven’t yet ... but that’s something we will discuss.”

Not that he’s inclined to do it even after the events of the wildest of weekends, one which put the Broncos (4-7) in perilous position of becoming the first team ever to miss the playoffs for five straight seasons following a Super Bowl championship.

“I think if we just follow the protocols,” Fangio said, “we’ll be fine.”

In other notable Week 12 calls:

The Titans were up 28-14 late in the first half at Indianapolis when coach Mike Vrabel sent out his punt team on fourth-and-4 at the Indy 38. A change of heart sent the Titans offense back out and Ryan Tannehill hit Corey Davis at the Indy 1 with 22 seconds left in the half. One play later, Tannehill took it in from a yard out for 35-17 lead, propelling them to a big win for a series split that put Tennessee back atop the AFC South.

“I wasn’t campaigning on the sideline,” Tannehill said. “I was honestly ticked off that we didn’t convert on third down. I was pretty ticked about that, but Coach gave us another chance and we took advantage.”

Washington briefly stood atop the dreadful NFC East standings after its 41-16 rout of Dallas on Thanksgiving, and the team posted a snapshot of the standings on the team’s official Twitter account with the caption “STOP THE COUNT!” That’s a phrase President Donald Trump popularized as he fought to overturn the results of the election in several swing states following President-elect Joe Biden’s victory.

NFL won't be cutting in line for coronavirus vaccine

'My Cause My Cleats' campaign has taken a foothold in NFL

Derek Carr is the king of the audacious audibles in 2020

Mahomes piles up big numbers at Arrowhead - on Election Day