British Prime Minister Boris Johnson urged lawmakers to vote Tuesday for a new set of coronavirus restrictions in England, saying the country must “hold our nerve” until vaccines are approved and distributed.

England’s current four-week national lockdown ends at midnight, and the government plans to replace it starting Wednesday with a three-tier regional system based on the severity of the outbreak in different parts of the country.

The change requires Parliament’s approval, and it faces opposition from lawmakers — many from Johnson's own Conservative Party — who say the measures will devastate businesses, especially pubs, which face some of the tightest restrictions. Most of the country is being put into the upper two tiers, where shops, hairdressers, beauty salons and places of worship can reopen. But pubs and restaurants face strict limits in Tier 2 and closure in the topmost Tier 3. 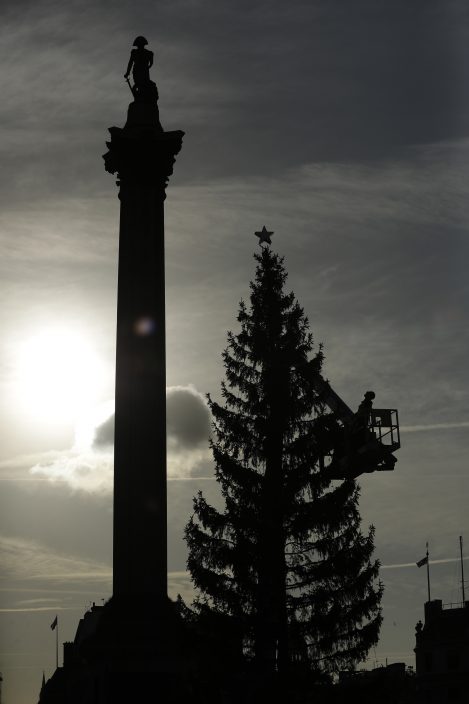 Workers arrange lights on the Norwegian Christmas tree in Trafalgar Square, during England's second coronavirus lockdown in London, Tuesday, Dec. 1, 2020. The tree's lights will be turned on later this week without the annual ceremony taking place to stop crowds gathering to try to curb the spread of coronavirus. (AP PhotoMatt Dunham)

Johnson told the House of Commons that a lockdown imposed on Nov. 5 had succeeded in levelling off the coronavirus infection rate in England, but that there was “a compelling necessity” for further restrictions.

“What we cannot do is lift all of the restrictions at once, or move too quickly, in such a way that the virus would begin to spread rapidly again,” triggering a new lockdown in January, he said.

The new measures are to be reviewed every two weeks and restrictions will be eased for five days over Christmas so that families can get together. Other parts of the U.K. — Scotland, Wales and Northern Ireland — are all following their own local restrictions to curb the spread of the virus. 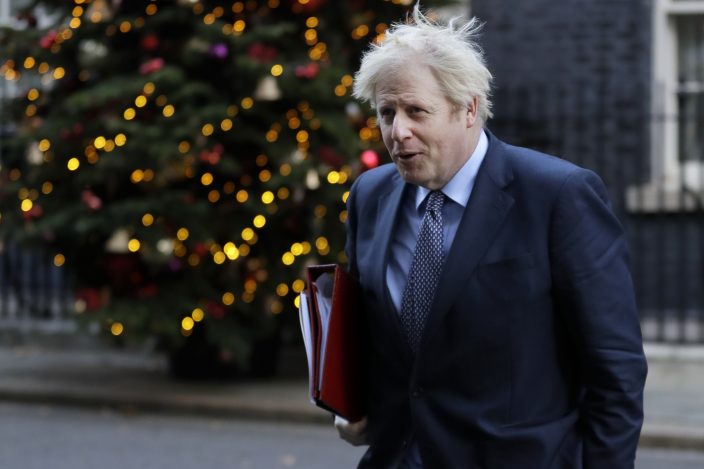 Britain's Prime Minister Boris Johnson walks across Downing Street to attend a cabinet meeting in London, Tuesday, Dec. 1, 2020. Members of Parliament will vote later Tuesday on the proposed tier system as the country prepares to come out of lockdown. (AP PhotoKirsty Wigglesworth)

Britain has had Europe’s deadliest COVID-19 outbreak, with more than 58,500 confirmed virus-related deaths.

But many Conservative lawmakers say the economic damage of the restrictions is increasingly outweighing the public health benefits. They say the government has not provided data to show the need for the restrictions, and is proposing a complicated and unfair system.

Conservative lawmaker Andrea Leadsom said she would not vote for the measures because she was not convinced they were “a lesser of all evils.” 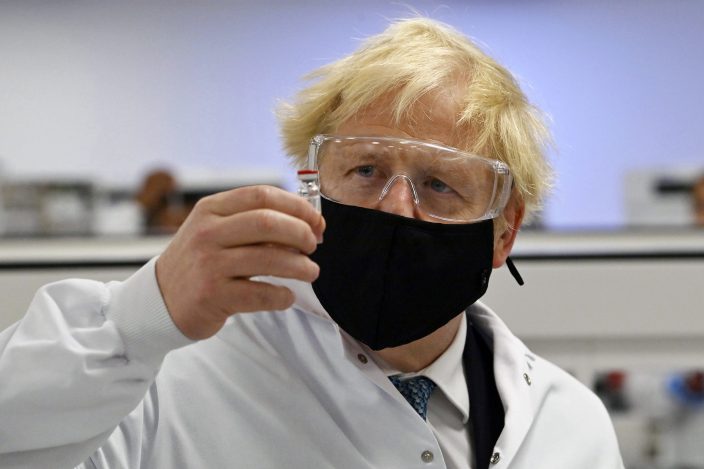 A humble foodstuff, the Scotch egg, has become a symbol of the discontent and confusion around the new rules. Livelihoods may depend on whether the popular concoction of a boiled egg wrapped in sausage meat and encased in breadcrumbs is a snack or a meal.

Pubs in Tier 2 areas can open and serve alcohol but only alongside a “substantial meal.” Ministers have given mixed messages about whether a Scotch egg fits the bill.

Cabinet Minister Michael Gove told broadcaster ITV that “as far as I’m concerned, it’s probably a starter,” but later said “I do recognize that it is a substantial meal.”

Critics say the Scotch egg debate — and related disputes about the status of sausage rolls, pork pies and pizza — shows the measures are inconsistent and open to abuse.

The measures are likely to be approved, despite the opposition, because the main opposition Labour Party says it will abstain rather than vote against them.

In an attempt to assuage critics, Johnson said pubs that have to stay closed will receive 1,000 pounds ($1,300) in recognition of “how hard they have been hit by this virus in what is typically their busiest month.”

But Simon Emeny, chief executive of brewers Fuller, Smith and Turner, said that would not be enough to solve “the financial Armageddon” that many English pubs are facing.

UK to ramp up inoculations with Oxford-AstraZeneca vaccine