Even in a year cut short by the COVID-19 pandemic, there was no shortage of memorable shots that helped shaped a year like no other on the PGA Tour.

A big drive gave Collin Morikawa his first major. A big putt gave Viktor Hovland his first win. And a big iron — in Bryson DeChambeau's case, a really big iron — allowed players to consider an unconventional approach to the game.

What follows are shots from every club in the bag — a few more than 14, so think of it as Arnold Palmer's bag when he played the shootout at Bay Hill — to review 2020 on the PGA Tour. 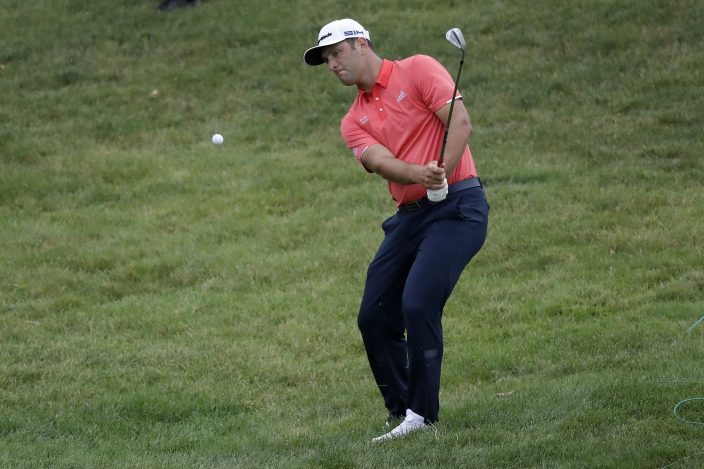 FILE - Jon Rahm, of Spain, chips for birdie on the 16th hole during the final round of the Memorial golf tournament in Dublin, Ohio, in this Sunday, July 19, 2020, file photo. Rahm hit the most memorable shot all year with a lob wedge. (AP PhotoDarron Cummings, File)

Morikawa never planned to drive the green on the par-4 16th at Harding Park during the practice rounds for the PGA Championship. Tied for the lead on Sunday, it was his best play on the 294-yard hole and the best shot of his young career. It was perfect in flight, took the right hop and rolled out to 7 feet. He made the eagle, shot 64 and won by two. 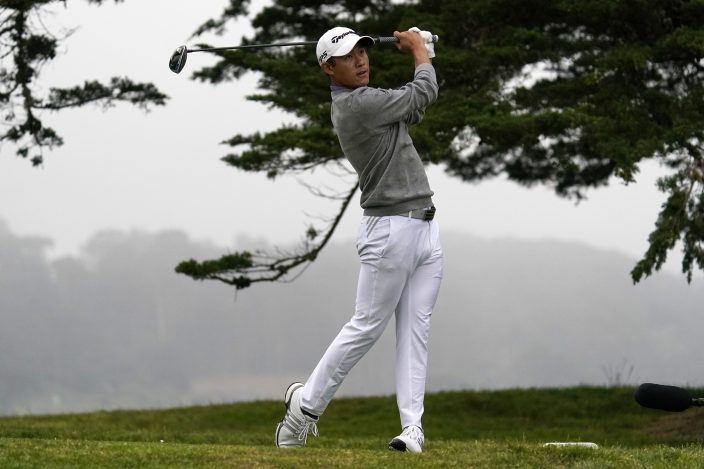 FILE - Collin Morikawa watches his tee shot on the 16th hole during the final round of the PGA Championship golf tournament at TPC Harding Park in San Francisco, in this Sunday, Aug. 9, 2020, file photo. His shot was the best of the year with a driver. (AP PhotoJeff Chiu, File)

Hideki Matsuyama already was off to a good start when he came to his final hole of the opening round of The Players Championship. He hit 3-wood to 25-feet and made the eagle putt, giving him a 9-under 63 to share the course record at the TPC Sawgrass. It was the last big cheer for the foreseeable future. The pandemic shut down golf the next day for three months.

Sergio Garcia had gone more than three years without a PGA Tour victory and had fallen out of the top 50 in the world for the first time since 2011. He was two shots behind in the final round of the Sanderson Farms Championship when he went with 5-wood on the par-5 14th. It barely cleared the bunker, bounced out of the collar and rolled out to 4 feet for eagle and a share of the lead. He went on to win with a birdie on the final hole.

Mark Hubbard made his major championship debut at Harding Park, and he made the cut in the PGA Championship in part because of one shot. As he made the turn Friday, he drove into a bunker on the 515-yard, par-4 ninth hole, the hardest on the course. Using his 2-hybrid, the shot reached the green and rolled some 20 feet into the cup for an eagle. Considering the ninth was converted from a par 5, it felt like an albatross. As a footnote, Hubbard has since swapped the 2-hybrid for a 5-wood, “so it went out on top.”

Dustin Johnson already had The Northern Trust won. All that was left when play resumed from a lightning storm was whether Louis Oosthuizen could birdie the par-5 18th. That would take him from No. 99 in the FedEx Cup to No. 70 and allow him to advance in the postseason. Oosthuizen had a 3-iron. He could barely see because of darkness. He drilled it over the hazard and onto the green to set up a two-putt birdie.

DeChambeau doesn't have to unleash the driver to show how much speed, power and distance he has added. In the final round of the Shriners Hospitals for Children Open in Las Vegas, he came to the 15th hole at the TPC Summerlin. It was a reachable par 4 at 300 yards. DeChambeau hit his tee shot to 12 feet — with a 4-iron — and made eagle.

The turning point in the Masters came on the front nine Saturday. Dustin Johnson was part of a five-way tie for the lead going into the weekend when he hit a 5-iron to 2 feet on the par-5 second hole for an eagle. He birdied the next two holes, shot 65 and built a four-shot lead going into the final round of his victory.

Jon Rahm's victory at Olympia Fields is best remembered for that 65-foot birdie putt in the playoff to beat Johnson. But that playoff at the BMW Championship might not have happened without his 6-iron on the par-5 15th. Rahm pulled his tee shot left into the trees on the last easy scoring hole. He took a penalty drop, and then ripped 6-iron to 10 feet for birdie.

Patrick Cantlay had a one-shot lead in the Zozo Championship at Sherwood when he came to the 176-yard 15th, the pin to the right and just beyond the ledge of the rock-filled lagoon. He pictured a three-quarter 7-iron and pulled it off perfectly. The ball landed next to the pin, rolled out to 10 feet and set up only the fifth birdie all round on the hole. Cantlay went on to win by one shot.

Johnson was coming off back-to-back bogeys in the final round of the Masters, and his four-shot lead was down to one after five holes. That's when he hit the shot of the tournament, an 8-iron to the back right shelf on the par-3 sixth hole to 6 feet for birdie. No one got closer than two shots the rest of the way.

Cameron Smith showed plenty of grit and a little bit of luck while trying to chase down Johnson at the Masters. He made two unlikely birdies while hitting from among the trees, including the 9-iron on No. 9 that took him from hopeful of making par to an easy birdie to stay in the mix. But only briefly.

Robert Streb had gone six years since his only PGA Tour victory and was happy to still be in the playoff with Kevin Kisner in the RSM Classic at Sea Island. From the left rough on the 18th hole, he hit a pitching wedge from 158 yards that came an inch from going in and led to victory.

Patrick Reed was the center of attention in the Mexico Championship, mainly from Brooks Koepka saying he thought Reed had cheated in the Bahamas. Reed blocked out the noise to win, and key to it was his gap wedge on the 16th hole. Blocked by the edge of trees left of the fairway, he hit a hard hook that rolled along the ridge down to 3 feet for birdie.

Rahm watched an eight-shot lead shrink to three at the Memorial, and then he went long of the par-3 16th. Facing a rock-hard green and a back pin, he hit a flop shot onto the fringe and watched it roll into the cup. That birdie became a bogey when video showed he slightly moved his ball. No matter. He won with what he called one of the great shots of his career.

Johnson and Rahm trading long, sweeping birdie putts at the BMW Championship were the most memorable. Equally big was Hovland ramming in a 30-foot birdie putt on the final hole to win the Puerto Rico Open for his first PGA Tour victory, the latest young player to win on a tour where it's getting harder to win every year.