The Vanderbilt Commodores have only one kicker listed on their two-deep chart for this weekend's game at No. 11 Georgia, and it's Sarah Fuller, the first woman to play in a Power Five game.

“She’ll be with us on the trip to Georgia, and we’re going to put the best people out there,” interim coach Todd Fitch said Tuesday. "And if she’s our best option, we’ll continue to work with her and we’ll do the best we can for the team.”

None of the kickers who were out last week after COVID-19 issues kept them away from the team is back yet. Fitch said Fuller kicked at Tuesday's practice while coaches continued evaluating other players on the roster. 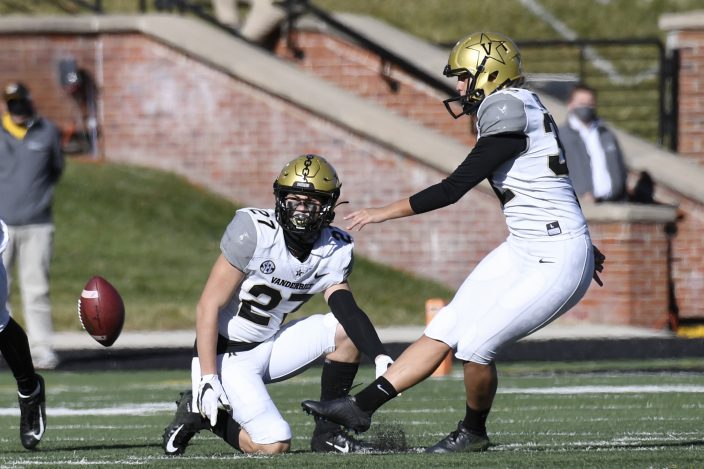 Vanderbilt's Sarah Fuller, right, kicks off as Ryan McCord (27) holds to start the second half of an NCAA college football game against Missouri Saturday, Nov. 28, 2020, in Columbia, Mo. With the kick, Fuller became the first female to play in a Southeastern Conference football game. (AP PhotoL.G. Patterson)

“If we can add something to the competition we will because we want to make sure we have the best availability for our team," Fitch said. “But right now, she kicked for us today and she’s certainly out there and trying to get better and working on all the different things that (special team) coach (Devin) Fitzsimmons has her working on."

Fuller might not be the only kicker on the sideline Saturday.

Fitch said Vanderbilt (0-8) is checking on when the current specialists will be available. Ryley Guay, who made 9 of 11 field goals last season, also might be a possibility to rejoin the team. He's currently in medical school but still has eligibility left.

“If it’s a possibility that we could get him back, we’ll certainly take a look at him if he can make our team better,” said Fitch, who is in his first season at Vanderbilt. “I know he kicked here before and everything. So as we progress through the week, I think we’ll have a better clarification on that.”

It's been a hectic few days at Vanderbilt.

Fuller made history as the first woman to play in a Power Five conference game in last week's 41-0 loss at Missouri. Vanderbilt fired coach Derek Mason a day later, and the Southeastern Conference honored Fuller as co-special teams player of the week for her squib kick to open the second half.

If Fuller gets to kick again at Georgia, the Bulldogs appear eager to watch.

Coach Kirby Smart, whose wife played basketball at Georgia, said women have the opportunity now to compete more than ever, though it still isn't where it should be. He said seeing Fuller kick is something the hopes and dreams of young girls hang on.

Smart mentioned Teresa Edwards, a four-time Olympic gold medalist in basketball and a Georgia alumna, and other women making it OK for others to be aggressive and compete hard.

“I think Sarah carries on that tradition, the way she goes about things and what she’s not afraid to do,” Smart said. "You know, not worried about what somebody is going to say. If she has a chance to help the team or contribute, then by all means, go do it.”

Fuller even gave Vanderbilt an impromptu pep talk at halftime.

Dubois scores in OT to lift Jets past Canadiens, 4-3