Attorney General William Barr has given extra protection to the prosecutor he appointed to investigate the origins of the Trump-Russia probe, granting him authority to complete the work without being easily fired.

Barr told The Associated Press on Tuesday that he had appointed U.S. Attorney John Durham as a special counsel in October under the same federal statute that governed special counsel Robert Mueller in the original Russia probe. He said Durham’s investigation has been narrowing to focus more on the conduct of FBI agents who worked on the Russia investigation, known as Crossfire Hurricane.

Under federal regulations, a special counsel can be fired only by the attorney general and for specific reasons such as misconduct, dereliction of duty or conflict of interest. An attorney general must document such reasons in writing. 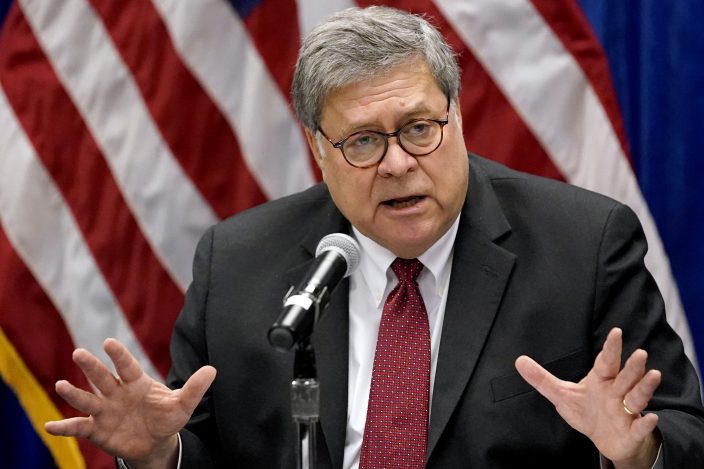 FILE - In this Oct. 15, 2020, file photo Attorney General William Barr speaks during a roundtable discussion on Operation Legend, a federal program to help cities combat violent crime in St. Louis. Attorney General William Barr said Tuesday, Dec. 1, that the Justice Department has not uncovered evidence of widespread voter fraud and has seen nothing that would change the outcome of the 2020 presidential election. (AP PhotoJeff Roberson, File)

The FBI in July 2016 began investigating whether the Trump campaign was coordinating with Russia to sway the outcome of the presidential election. That probe was inherited nearly a year later by special counsel Mueller, who ultimately did not find enough evidence to charge Trump or any of his associates with conspiring with Russia.

But the early months of the investigation, when agents obtained secret surveillance warrants targeting a former Trump campaign aide, have long been scrutinized by the president and other critics of the probe who say the FBI made significant errors. An inspector general report last year backed up that criticism but did not find evidence that mistakes in the surveillance applications and other problems with the probe were driven by partisan bias.

Barr decided "the best thing to do would be to appoint them under the same regulation that covered Bob Mueller, to provide Durham and his team some assurance that they’d be able to complete their work regardless of the outcome of the election," he said Tuesday.

The current investigation, a criminal probe, had begun very broadly but has since “narrowed considerably” and now “really is focused on the activities of the Crossfire Hurricane investigation within the FBI,” Barr said. He said he expects Durham would detail whether any additional prosecutions will be brought and make public a report of the investigation’s findings.

In an Oct. 19 order, obtained by The Associated Press, Barr says Durham is authorized "to investigate whether any federal official, employee or any person or entity violated the law in connection with the intelligence, counter-intelligence or law enforcement activities” directed at the 2016 presidential campaigns, anyone associated with the campaigns or the Trump administration.

House Judiciary Committee Chairman Jerrold Nadler, D-N.Y., said the appointment erodes trust in the Justice Department, and he questioned how it was allowed under the special counsel rules.

“And we should not lose sight of the larger picture: in the waning days of the Trump administration, the attorney general has once again used the powers of his office to settle old scores for the president," Nadler said.

The special counsel rules say the appointed person should be outside of government, but Barr pointed to specific statutes in his memo that would allow him to go around that rule.

A senior Justice Department official told the AP that although the order details that it is “including but not limited to Crossfire Hurricane and the investigation of Special Counsel Robert S. Mueller III,” the Durham probe has not expanded. The official said that line specifically relates to FBI personnel who worked on the Russia investigation before the May 2017 appointment of Mueller, a critical area of scrutiny for both Durham and for the Justice Department inspector general, which identified a series of errors and omissions in surveillance applications targeting a former Trump campaign associate.

The focus on the FBI, rather than the CIA and the intelligence community, suggests that Durham may have moved past some of the more incendiary claims that Trump supporters had hoped would yield allegations of misconduct, or even crimes — namely, the question of how intelligence agencies reached their conclusion that Russia had interfered in the 2016 election.

Republicans lauded the appointment. Senate Judiciary Chairman Lindsey Graham said it was “obvious the system failed” and he concurred with the appointment of a special counsel to continue the investigation.

MATCHDAY: Arsenal at Southampton in EPL; Milan derby in ...

Jozef Venglos, a Slovak coach who ...

Hinchcliffe back with Andretti for full IndyCar season

James Hinchcliffe will return to A ...

GOP presses ahead after election with Russia probe review

Lawyer for Flynn says she updated Trump on status of case

Prosecutor looking into the origins of Russia probe resigns