After a satisfactory first season with Phoenix, Ricky Rubio was startled to learn last month he'd been traded to Oklahoma City.

There was hardly time to process the sudden change when another deal struck two days later sent him back to Minnesota where his NBA career began. After three years away, the slick-passing, fan-favorite point guard has returned with a deeper life perspective, a thick beard and a slightly better jump shot.

Rubio, drafted by the Timberwolves as a 19-year-old out of Spain in 2009 with the fifth overall pick, was more than happy to reunite with coach Ryan Saunders and join a team with offense-minded guards he ought to fit well with. 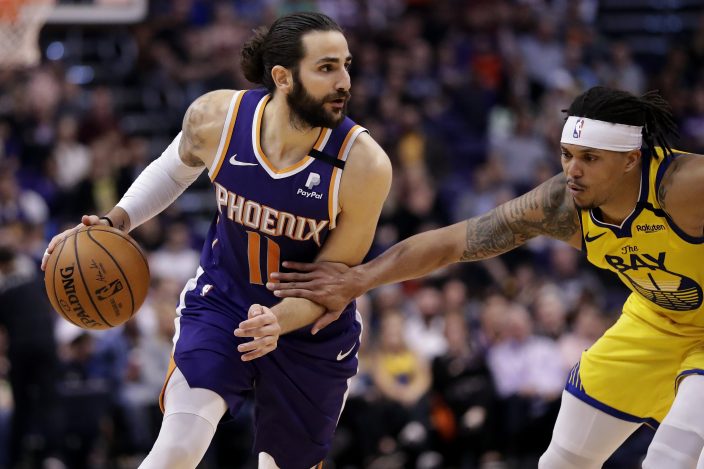 FILE - In this Feb. 29, 2020, file photo, Phoenix Suns guard Ricky Rubio (11) drives as Golden State Warriors guard Damion Lee (1) defends during the second half of an NBA basketball game in Phoenix. The Minnesota Timberwolves reached an agreement to bring back Rubio on a busy Wednesday night, Nov. 18, 2020. The Timberwolves, according to a person with knowledge of the negotiations, plan to send the 17th pick to the Oklahoma City Thunder for the 25th and 28th overall selections and Rubio. (AP PhotoMatt York, File)

“I feel like I left with something that was unfinished, I would say, and I feel like I have a chance now to really prove myself again, prove I can help the team to get to the playoffs,” Rubio said on a video conference call Tuesday with reporters from Minnesota's practice facility on the first day of training camp. "I’m a different player than when I came here and when I left. I have a lot more experience, especially in the NBA. I grew up as a player and as a person, too, and I feel like it’s a good time.”

Injuries were a significant limitation early in his career, starting with the torn ACL in his left knee on March 9, 2012, that cut short what had been a promising rookie season. Rubio's mother died of cancer four years later, a heartbreak that helped him forge a stronger bond with Saunders, whose father, Flip Saunders, died of cancer in 2015. After one season under coach Tom Thibodeau, Rubio was traded to Utah when Thibodeau sought a different skill set at the position.

With the Jazz, he mostly thrived next to Donovan Mitchell. After signing with the Suns as a free agent last year, deferring interest from the Timberwolves because he didn't feel ready to return, he meshed well with Devin Booker. Over the last three seasons Rubio has posted the three best field goal percentages and scoring averages of his nine-year career. He shot a career-best 36.1% from 3-point range in the pandemic-shortened 2019-20 season.

FILE - Minnesota Timberwolves' Ricky Rubio plays against the New Orleans Pelicans during the second half of an NBA basketball game in Minneapolis, in this Feb. 10, 2017, file photo. Rubio has returned to his original NBA team, a sidewinding career leading the popular point guard back to the Minnesota Timberwolves after a third trade in three years. (AP PhotoJim Mone, File)

Whether he comes off the bench to spell D'Angelo Russell or plays next to him in a three-guard lineup, the 30-year-old Rubio will only enhance the improved depth around star center Karl-Anthony Towns.

“Ricky does things that don’t always show up on the box score, and he impacts winning in a way where he can help young players grow, and that’s what the thought process behind this was,” Saunders said. “It’s documented, mine and his relationship, but yesterday, when we talked in my office, it was basketball and how we’re going to improve this team and how we’re going to build a winner, and that’s our goal here.”

The Timberwolves also acquired veteran power forward Ed Davis during their draft-week maneuverings, highlighted by the selection of shooting guard Anthony Edwards with the first overall pick. They still have a long way to go, especially on defense, to be included in the conversation about Western Conference contenders for the playoffs, but their roster is undoubtedly stronger one year after president of basketball operations Gersson Rosas took over and initiated an aggressive renovation.

“I can really relate to the construction of the team they have here," Rubio said. “I know KAT very well. I know how to get the best out of him, and hopefully we can do the same with D-Lo and all the young guys here to really help winning."