Luka Doncic's first experience with the playoffs ended with questions about whether Marcus Morris of the Los Angeles Clippers was intentionally trying to hurt the young Dallas sensation in a first-round series won by LA.

The Mavericks might have hinted at what they thought through trades and draft picks during this abbreviated offseason.

Dallas acquired James Johnson and his black belt in karate from Oklahoma City in a three-team trade after using the club's first-round draft choice at No. 18 overall on Josh Green, who was a strong defender in his only season at Arizona. 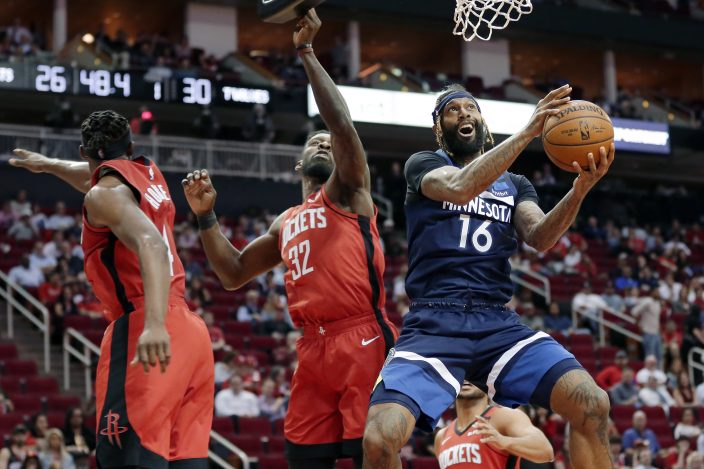 FILE - In this March 10, 2020, file photo, Minnesota Timberwolves forward James Johnson (16) shoots after getting past Houston Rockets forwards Danuel House Jr., left, and Jeff Green (32) during the first half of an NBA basketball game in Houston. Luca Doncic's first experience with the playoffs ended with questions about whether Marcus Morris of the Los Angeles Clippers was intentionally trying to hurt the young Dallas sensation. The Mavericks might have hinted at what they thought through trades and draft picks during this abbreviated offseason. Dallas acquired Johnson and his black belt in karate from the Oklahoma City Thunder after using the club's first-round choice at No. 18 overall on Josh Green, who was a strong defender in his only season at Arizona. (AP PhotoMichael Wyke, File)

The Mavericks also sent their best 3-pointer shooter in Seth Curry to Philadelphia for Josh Richardson, described by coach Rick Carlisle as an “edgy guy who is a terrific defender.”

“I don’t really take well to my brothers being messed with, but I’m not an instigator in situations so I’m not going to be out there just trying to get in people’s faces and do a lot of extra stuff,” Richardson said on the opening day of training camp Tuesday. “I have no problem doing what needs to be done if people aren’t being treated right, and I feel like there’s a few other guys on this team that feel the same way about that.”

Dallas made the playoffs for the first time in four years before losing to the Clippers in six games in the NBA bubble in Florida in August. The goals will be higher in Doncic's third season, and the 21-year-old star's second with Kristaps Porzingis, the European sidekick who won't play before January as he continues to recover from knee surgery.

The competition is still stiff in the Western Conference, with the Los Angeles Lakers defending their title and the other LA team seeking redemption after falling short of an expected showdown in the conference finals with the Lakers.

Even with both LA teams and other strong contenders in the West, the Mavericks will look to earn a top-four seed in the playoffs for the first time since winning the franchise's only championship in 2011. Dallas was seeded seventh last season.

“It was my first playoff experience against an amazing team,” Doncic said. “I learned a lot, not just me, I think the whole group learned a lot. We’re just going to learn from that and hopefully we can use it again this year.”

For Carlisle, part of the upgrade in toughness comes from the return of center Dwight Powell, whose season ended in January — before the coronavirus shutdown — because of a torn Achilles tendon.

Jalen Brunson, the backup to Doncic at point guard after getting drafted in the second round the same year Doncic went third overall, is back after a shoulder injury kept him out for the NBA's restart. The two-time NCAA champion from Villanova brings an edge as well.

“As a young, developing team that’s gone through one stage of development, of getting out of the lottery and into the playoffs, but experienced a loss in the playoffs, we’ve got to look at this as a situation where our collective toughness will increase anyway regardless of who’s on the team,” Carlisle said. “You can never have enough toughness on an NBA team, particularly in the Western Conference with the way things are shaping up.”

With Curry gone, Tim Hardaway Jr. takes the spotlight as the primary shooting guard, although Trey Burke's return gives Carlisle another scoring option behind Doncic. Dallas didn't re-sign Burke last offseason after he was part of the trade with the New York Knicks headlined by Porzingis, but added the guard for the restart when a roster spot opened.

Burke's emergence solidified the NBA's most efficient offense, and gave the Mavericks one more reason to put the focus on defense in the offseason.

“When you establish that you’re a galactically successful offensive team but below average defensively, that’s not going to win you a championship,” Carlisle said. “I don’t believe there’s ever been a team that’s won a title in the NBA that hasn’t been a good defensive team.”

And instead of going into training camp talking about how the emphasis would be on defense, Carlisle was talking about players he believes emphasize defense on their own.

A little toughness, too.