Texas surpassed 9,000 hospitalized coronavirus patients Tuesday for the first time since a deadly summer outbreak as the pandemic's spread threatened the Big Bend region near the desert artist hub of Marfa, where tourists continued visiting and officials urged people to stay home.

The rising number of cases near the remote West Texas border is but another example of how the virus is now spreading into places that ducked previous surges but are now ensnared by its long-reaching tentacles and confronted with its wide-ranging challenges.

Texas reported more than 15,000 new cases Tuesday, smashing the previous single-day record. State health officials attributed at least some of the spike to a lag in reporting over the long Thanksgiving holiday weekend, but doctors and local leaders still say they're trending in the wrong direction. 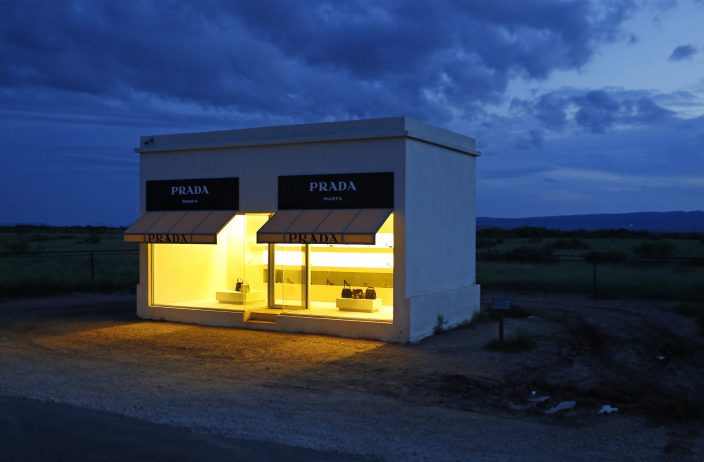 FILE - In this Sept. 6, 2016 file photo, dusk settles in over Prada Marfa, an art installation in Valentine, Texas. Marfa, a remote but trendy high desert town along the Texas border, is seeing a rising number of COVID-19 cases in another example the coronavirus now spreading into regions that were largely spared during past surges. (AP PhotoPatrick Semansky, File)

Marfa is located about 200 miles (321.87 kilometers) down the border from El Paso, where hospitalizations have fallen slightly after a grim November. The town of roughly 1,700 people is the second-largest in Presidio County, where in the past two weeks the number of cases since the pandemic began has doubled to at least 460 confirmed cases, according to state health figures.

The county borders Ojinagao, Mexico, and the only hospital in rural Alpine has just enough beds to treat only a handful of COVID-19 patients. 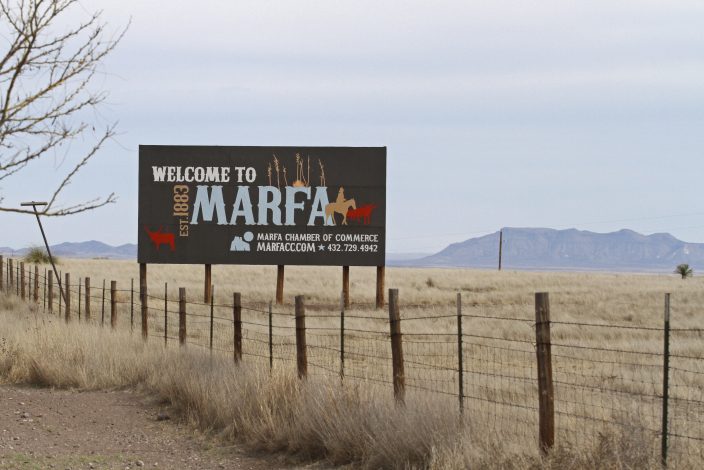 FILE - In this March 7, 2019 photo, a welcome to Marfa sign is posted off of Highway 90. Marfa, a remote but trendy high desert town along the Texas border, is seeing a rising number of COVID-19 cases in another example the coronavirus now spreading into regions that were largely spared during past surges. (Jacob FordOdessa American via AP)

Presidio County Judge Cinderela Guevara said that one in 13 people in the West Texas county have contracted COVID-19. She said the main concern for the county, which spans nearly 4000 square miles (10,359.96 square kilometers), is that they do not have a hospital, so ill residents have to travel up to an hour or be flown out for critical care. On Monday, Guevara urged residents to shelter in place and avoid nonessential travel given the “alarming" hike in cases.

The county is where former U.S. Supreme Court Justice Anton Scalia died in 2016 while staying at a ranch near Marfa.

Guevara attributes the spread to family gatherings, people visiting loved ones or doing business across the U.S.-Mexico border and those who have relaxed precautionary measures like masks and socially distancing when visiting loved ones. Richardson said the increase in tourism in the area may also be contributing, observing that while people often socially distance in parks and hiking trails in the Big Bend region, they still visit restaurants, restrooms and gas stations in the nearby towns.

Big Bend National Park has seen a large increase in visitors during the coronavirus lockdown, with October recording some of the biggest numbers seen in the history of the park, said Tom Vandenberg, a park spokesman. He said the park is open at limited capacity and limits groups of eight but visitors may still find themselves searching for parking spots or sharing restrooms with other visitors.

“We are scared because our hospital is small, there is not good enough equipment if a person becomes severely ill,” said Laura Sanchez, 50, a retail worker in Alpine.

Sanchez said she blames the surge in Brewster, the surrounding county in Alpine, on family gatherings, tourism and people not taking the pandemic seriously and refusing to wear masks. She said in her Latino community, she has noticed many residents taking more precautions over fears of being sent far away for care.

Big Bend Regional Medical Center said a lack of space has not been an issue so far. The hospital was treating four COVID-19 patients as of Tuesday and had enough capacity for an influx of patients, said Ruth Hucke, a hospital spokeswoman. She said no virus patients had died at the hospital within the last two weeks.

Texas is on the verge of 22,000 confirmed virus deaths, the second-highest in the country. Republican Gov. Greg Abbott has ruled out a return to shutdown measures, saying local leaders instead need to enforce existing measures, such as limits on restaurant capacity.

“It’s a sacrifice we should all be willing to make,” Ferguson said.

The Latest: Sharks to open home schedule hosting in Ari ...

'Were in trouble': Texas sending record help to hospitals