Thailand’s highest court is set to rule Wednesday on whether Prime Minister Prayuth Chan-ocha has breached ethics clauses in the country’s constitution and should be ousted from his position.

The Constitutional Court will rule on a complaint brought by the Pheu Thai Party, the largest opposition grouping in Parliament, that Prayuth has broken the law by continuing to live in his military residence after he retired as army commander in September 2014.

The ruling comes as Prayuth has been dealing with another major headache, a persistent student-led pro-democracy movement that has been holding frequent well-attended rallies demanding that he and his government step down, charging that they came to power illegitimately. 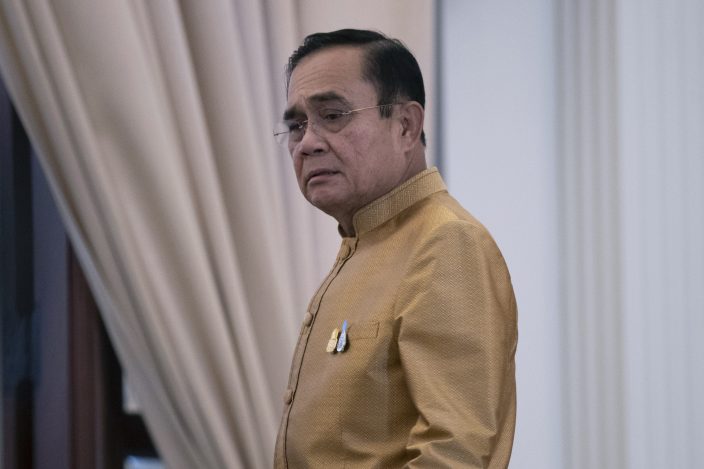 Thailand's Prime Minister Prayuth Chan-ocha leaves after a press conference at Government House in Bangkok, Thailand, Tuesday, Dec. 1, 2020. Thailand’s highest court is set to rule Wednesday, Dec. 2, 2020 on whether Prayuth has breached ethics clauses in the country’s constitution and should be ousted from his position. (AP PhotoSakchai Lalit)

As army commander, Prayuth led a coup in May 2014 that ousted an elected government led by the Pheu Thai Party. He then headed the junta that ruled for five years, and was also prime minister in the military-guided government.

A general election last year brought to power a proxy party established by the military, which with its allies selected Prayuth to serve again as prime minister. The ongoing protests charge that the 2017 constitution established under military rule gave the military’s proxy Palang Pracharath Party an unfair advantage in the election.

When Prayuth and several of his Cabinet ministers faced a censure debate in Parliament in February, opposition leader Sompong Amornwiwat of the Pheu Thai Party raised the issue of whether Prayuth had acted illegally by continuing to live at his army residence at a base in Bangkok.

The complaint, which was forwarded to the court, alleges that he broke the constitutional articles barring government ministers from receiving special benefits from state agencies or enterprises because that would amount to a conflict of interest. If a minister is found guilty of violating ethical standards, the official will be disqualified and forced to step down.

Prayuth’s defense has been that the official residence of the prime minister is undergoing renovation, and also that he faces security concerns.

The army has argued on his behalf that his military housing is actually a VIP guest house, though critics suggest that if he did not pay at least for water and electricity, he may be breaking the law.

If the court finds Prayuth guilty, he will also be disqualified from holding a government position for two years. His Cabinet will then act as a caretaker government until Parliament can choose a new prime minister and Cabinet.

Prayuth has expressed seeming unconcern about what the verdict might be, telling reporters Tuesday that it was up to the court.

It is conceivable he is tired of the job. As head of his 2014-2019 military government, he had virtually unlimited power and has been irritated by criticism and operating under democratic rules.

In the past 12 years, court rulings have ousted three Thai prime ministers, but Prayuth is widely believed to be likely to get a favorable ruling.

One theory holds that the court might toss Prayuth out of his job as a way of cooling down the pro-democracy movement, which in addition to targeting the prime minister, had made unprecedented criticism of the monarchy. But the protest leaders have made clear that they consider reform of the monarchy, which they believe holds too much power under what is supposed to be a democratic constitutional monarchy, their prime goal.

The court, like the military, is considered a pillar of the country’s royalist establishment, and the ultimate bulwark against threats to it. The three ousted politicians were associated with a former prime minister, populist billionaire Thaksin Shinawatra, who was ousted by a 2006 military coup after being accused of abuse of power, corruption and disrespect to the monarchy.