The four-year veteran, who doubles as the Colts' kickoff specialist, made the announcement in a Twitter post Tuesday night, one day after he revealed the diagnosis on social media.

“Surgery went well," he wrote. “Overwhelmed by all the love and support everyone sent my way." 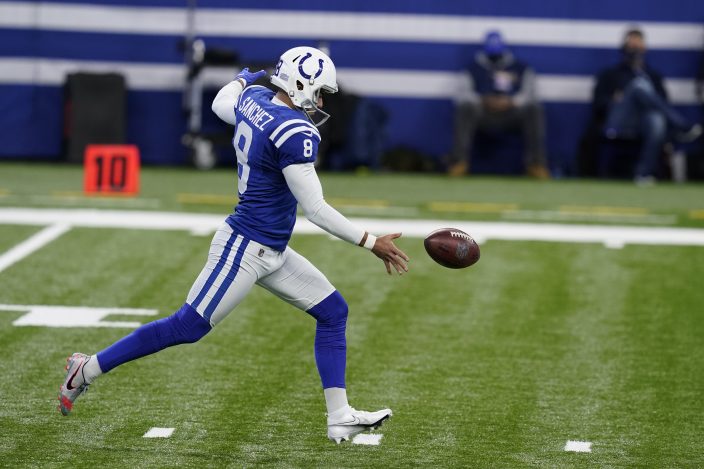 Indianapolis Colts punter Rigoberto Sanchez punts before an NFL football game against the Tennessee Titans, Sunday, Nov. 29, 2020, in Indianapolis. Sanchez says he will have surgery Tuesday to remove a cancerous tumor. Sanchez made the announcement in an Instagram post (AP PhotoDarron Cummings)

Sanchez first learned he had a cancerous tumor late last week, and after consulting with doctors decided to play Sunday in a key AFC South showdown with Tennessee. Indy (7-4) lost 45-26, falling one game behind the division-leading Titans.

Special teams coordinator Bubba Ventrone said that was because Sanchez was having discomfort with his leg swing on kickoffs. The Colts also made accommodations for Sanchez’s punts.

“Some of the ball placement things we would normally do in a game, we were unable to do this past game, because of the inability to do it because of the pain tolerance.”

Among those offering supportive messages was former Colts coach Tony Dungy, who led the Colts to their only Super Bowl title in the Indianapolis era.

“That is awesome to hear," Dungy wrote. “Please keep us posted on your recovery and we will@keep praying!"

Sanchez is one of the most popular players in the Colts locker room and is averaging a career-high 47.2 yards on punts this season.

The Colts have not said when they expect Sanchez to return. Indy plays at Houston this weekend.