Ron Klain has checked all the boxes of a classic Washington striver: Georgetown, Harvard Law, Supreme Court clerk and Capitol Hill staffer, White House adviser and, along the way, of course, lobbyist and lawyer.

Now Klain is preparing to serve as President-elect Joe Biden's chief of staff, a job often referred to as the nation's chief operating officer.

His gilded resume, deep knowledge of the gears and levers of power in the capital and decadeslong association with Biden have also done something unusual in today's Washington: drawn praise from both sides of the ideological divide. 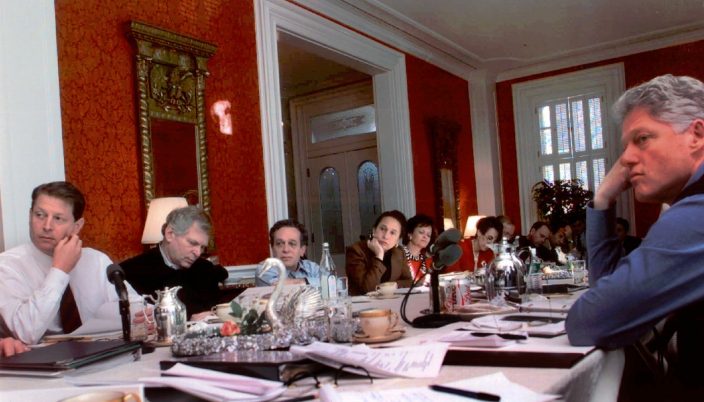 The 59-year-old father of three has a reputation among Democrats and, strikingly, even some Republicans for competence — a notable attribute after an administration that rewarded and dismissed people based on their loyalty to President Donald Trump.

In his new job, Klain will be asked to enforce the president's wishes, catch the spears thrown at him and oversee dozens of other top staffers whose outsize ambition may match his own.

“This is not a time for inexperienced novices,” said Valerie Jarrett, who worked as senior adviser to President Barack Obama while Klain was then-Vice President Biden’s chief of staff. 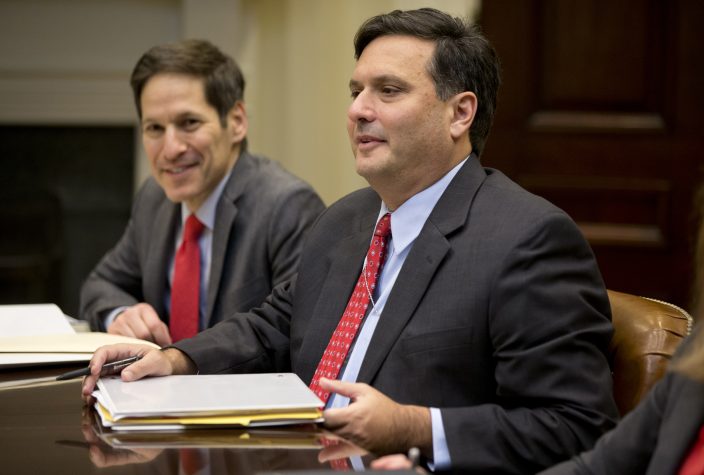 FILE - In this Nov. 4, 2014, file photo Centers for Disease Control and Prevention director Dr. Thomas Frieden, left, and Ebola coordinator Ron Klain, attend a meeting with President Barack Obama and members of his national security and public health teams to receive an update on the Ebola response in the Roosevelt Room of the White House in Washington. Klain is preparing to serve as President-elect Joe Biden’s chief of staff, a job often referred to as the nation’s chief operating officer. (AP PhotoJacquelyn Martin, File )

Klain, she noted, knows the function of every agency in the federal government, has deep relationships on Capitol Hill and has the obvious respect of Biden and his inner circle.

“We’ve seen over the past four years how much can go wrong when people who actually don’t understand how the government works are in charge,” she added.

Klain is a throwback, representing the return of the experienced Washington hand — equal parts wonky master of obscure policy and power-shaping consigliere. 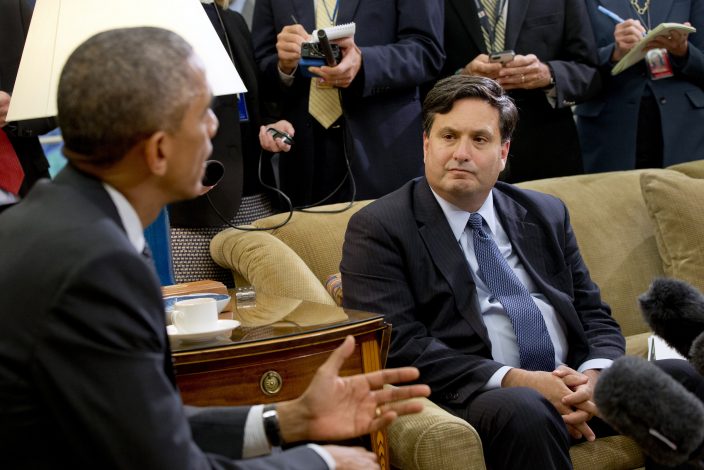 FILE- In this Oct. 22, 2014, file photo, reporters take notes as Ebola coordinator Ron Klain listens to President Barack Obama speak to the media about the government's Ebola response in the Oval Office of the White House in Washington. New federal Ebola response squads are being readied to rus to an U.S. city where a new Ebola case might be identified, officials said. Klain is preparing to serve as President-elect Joe Biden’s chief of staff, a job often referred to as the nation’s chief operating officer. (AP PhotoJacquelyn Martin, File)

“He has a quiet profile among the wider public and an enormous profile among those who understand real power,” said Evan Osnos, author of a new Biden biography, “Joe Biden: The Life, The Run and What Matters Now.”

Osnos points to the fact that Klain’s appointment as chief of staff was “applauded by an almost impossibly wide spectrum” of politicians and pundits — from left-wing standard-bearer Rep. Alexandria Ocasio-Cortez of New York to conservative commentator Hugh Hewitt.

The Indianapolis native has been a top aide in all three branches of government, plus an unofficial permanent fourth, the K Street influence industry. 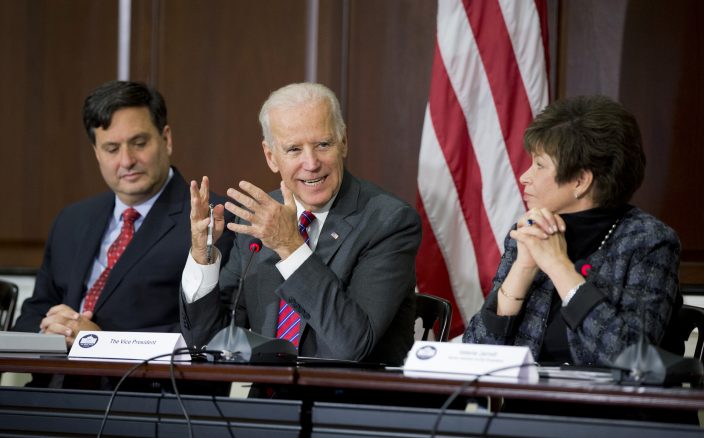 And he has been a quiet presence with a seat at the table for some epochal political moments spanning three decades.

Jarrett recalls an old Klain mantra that comes into play again as Biden starts to assume the presidency while Trump continues to openly question the result of the election and declare, without proof, widespread voter fraud. 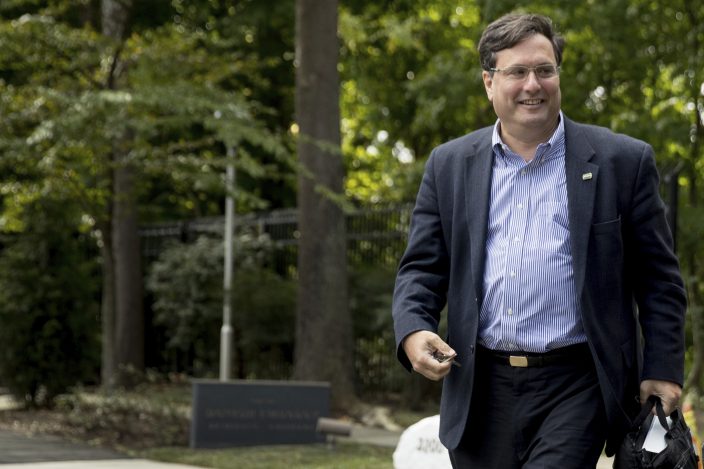 “Ignore the noise,” Klain, then Obama’s Ebola czar, told the White House team as anxiety swirled that the virus was coming to American shores. “Ignore the noise. Focus on the facts.”

“Because there’s always going to be noise,” Jarrett said. “And it can be distracting.”

Sen. Ed Markey, D-Mass., hired a young Klain, who had clerked for Supreme Court Justice Byron White, for what was then Markey’s House staff. What stood out, Markey says now, was Klain’s ability to digest and articulate the driest policy points in ways that human beings could understand.

“It defied his age,” Markey says. He recalled in a recent phone interview a time early on when he handed Klain a book by an economics professor and asked him to get familiar with it before the author visited the office the next day.

When the meeting arrived, Klain made Markey look good by being able to converse with the author on the dense economic argument outlined in the book. The skill carried through to other policy areas.

“If you were on ‘Who Wants to be a Millionaire,’ and you could dial a friend and the million dollars depended on it, Ron Klain is the one I would call,” Markey said.

His attention to detail can even be seen in his family life. Longtime co-workers describe him as work and family oriented, fond of planning every minute detail of large family vacations. He’s also known for throwing home parties with quirky touches, like hiring an ice cream truck to come to his front door or renting a blow-up movie screen for his backyard. A passionate fan of his hometown Indianapolis 500, Klain attends the race.

Klain hasn't always been considered the right man for the job. His 2014 appointment to head up Obama's Ebola response team drew a round of public criticism because of his lack of medical experience. Republican Sen. Ted Cruz of Texas dismissed him as a “White House political operative” and GOP Sen. John McCain of Arizona called him a “democratic apparatchik.” “Saturday Night Live” lampooned him as hopelessly out of his depth.

But now Klain's experiences with pandemic policy confer an air of authority on his critiques of the Trump administration's strategies. He's made multiple media appearances and a series of deliberately zippy Biden campaign video explainers that show Klain breaking things down in front of an illustrated whiteboard.

More than a year before the coronavirus was even identified, Klain was warning that Trump's presidential style was singularly unequipped to deal with a pandemic. His comments at a summer 2018 forum sponsored by the Aspen Institute now seem prescient.

Klain has served as chief of staff to two vice presidents (Gore and Biden) and one attorney general (Janet Reno). He has worked with Biden in one form or another for more than 30 years.

Along the way, Klain also carved out a particular niche: go-to guy for presidential debate prep. He's had a hand in debate preparations for Democratic presidential candidates going back to John Kerry in 2004. And Klain and his frequent partner, Karen Dunn, are credited with helping Obama successfully bounce back from a shaky performance in his first debate against Mitt Romney in 2012.

Gene Sperling, another of Obama's debate coaches, was in the room when Klain took a post-debate call from Obama after the first faceoff. He said Klain didn't try to sugarcoat the situation; he acknowledged the setback and agreed with Obama's own harsh assessment of his performance, but kept things focused on the upcoming debates.

“He was like, ‘OK, two more, we’re going to do this, we’re going to do that,’” Sperling said in a recent telephone interview. “I think that’s just really important: That you can cheerlead and lose credibility, you can just be just a prince of darkness or you can be the straight voice who’s acknowledging some difficulties but realizing the only thing that helps is being the cool head. Ron was the cool head.”

Klain can occasionally be prickly or short tempered and has been described as one who does not suffer fools gladly. But co-workers recall his management style as disciplined and inclusive — a departure from both the turmoil of the Trump White House and from Obama's first chief of staff, Rahm Emanuel, who was notorious for his aggressive, often vulgar, style.

There have been some missteps along the way. As Biden's top deputy on the rollout of the nearly $800 billion Recovery Act stimulus package, Klain became publicly enmeshed in controversy surrounding Solyndra, a solar panel manufacturer that went bankrupt after receiving more than $500 million in stimulus funds. Klain, despite known doubts about the company’s viability, was later revealed to have signed off on an Obama visit to the Solyndra factory that became an embarrassment and opened the stimulus program to charges of mismanagement.

Klain’s professional bond with Biden has been through some ups and downs as well.

In the 2016 presidential race, Klain signed on as an adviser to presumptive Democratic front-runner Hillary Clinton without waiting to see if Biden — who was mourning the recent death of his son Beau — would declare his candidacy.

The perceived defection produced hard feelings that were revealed by the WikiLeaks dump of hacked emails from Clinton campaign chief John Podesta. In an October 2015 email to Podesta, about a week before Biden announced he would not run, Klain acknowledged that his choice had damaged both Biden’s campaign prospects and his relationship with his longtime boss.

“It’s been a little hard for me to play such a role in the Biden demise,” Klain wrote then. “I am definitely dead to them — but I’m glad to be on Team HRC.”

But as Biden’s 2020 campaign heated up, Klain once again found himself deeply ensconced in the operation, serving as one of the public faces of the campaign and preparing his candidate for the most chaotic presidential debate in American history.

“Klain was able to get his way back into Bidenland by sheer competence,” Osnos said.