Quarterbacks Drew Lock, Brett Rypien and Blake Bortles will be allowed to rejoin their teammates at practice Wednesday after the Denver Broncos activated them from the reserve/COVID-19 list on Tuesday.

Their return means practice squad receiver Kendall Hinton won't have to be the one taking the snaps at Kansas City (10-1) next weekend as he did in Denver's 31-3 loss to New Orleans on Sunday.

The Broncos (4-7) were forced to play the Saints without any of their quarterbacks after Lock, Rypien and Bortles were deemed high-risk close contacts 24 hours earlier for having been mask-less around QB Jeff Driskel before he tested positive for the coronavirus on Thanksgiving. 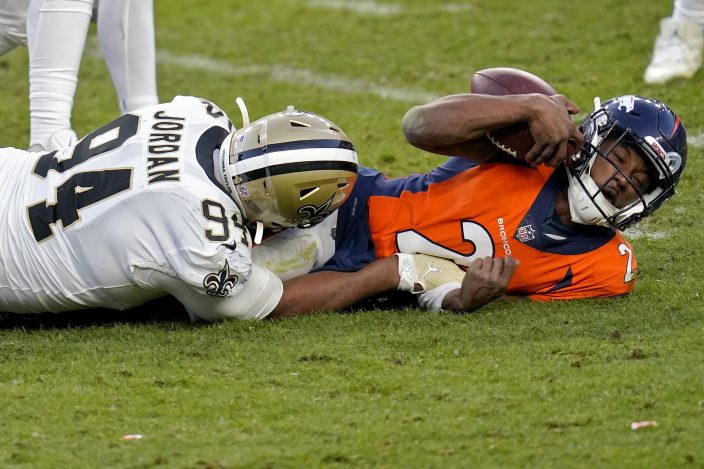 The NFL denied Denver's request to push the Saints game back 48 hours, which would have allowed their QBs to return to action. So they turned to Hinton, a former quarterback in college, and sprinkled in some direct snaps to running backs Royce Freeman and Phillip Lindsay.

Lock, Rypien and Bortles were removed from the reserve/COVID-19 list after testing negative Tuesday for a fifth consecutive day.

The NFL didn’t allow teams to gather at their facilities Monday or Tuesday so Lock, Rypien and Bortles will be able to rejoin their teammates Wednesday at practice (meetings are being conducted remotely).

Lock and Rypien return to the Broncos’ active roster, and Bortles returns to the practice squad.

Denver coach Vic Fangio said Monday that the Broncos would discuss isolating Bortles in case another quarterback quandary arises, but he stressed the team should “be fine” if players would just follow the league’s COVID-19 protocols.