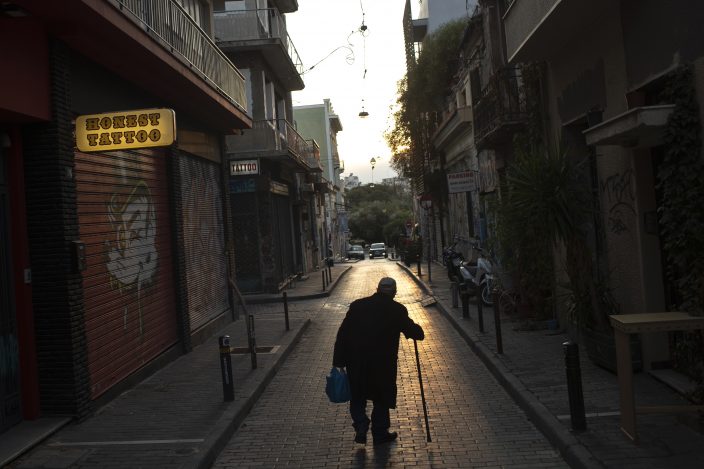 An elderly man walks along a nearly empty street of Psiri, in central Athens, on Tuesday, Dec. 1, 2020. Greece is on lockdown through Dec. 7 but government officials say it is too early to say when schools and businesses will reopen due to continued pressure on the state-run health service, with intensive care wards near capacity in parts of the country. (AP PhotoPetros Giannakouris) 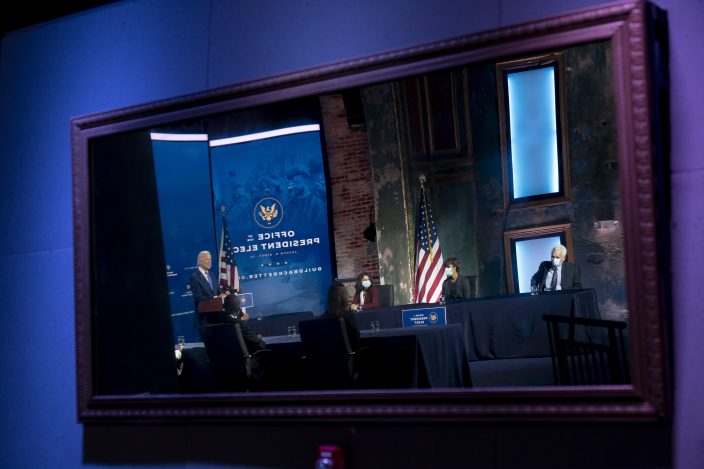 President-elect Joe Biden speaks at a news conference to introduce his nominees and appointees to economic policy posts at The Queen theater, Tuesday, Dec. 1, 2020, in Wilmington, Del. (AP PhotoAndrew Harnik)

VIRUS OUTBREAK-VACCINE — Pfizer and BioNTech say they’ve won permission for emergency use of their COVID-19 vaccine in Britain, the world’s first coronavirus shot that’s backed by rigorous science — and a major step toward eventually ending the pandemic. The move makes Britain one of the first countries to begin vaccinating its population as it tries to curb Europe’s deadliest COVID-19 outbreak. By Medical Writer Lauran Neergaard. SENT: 680 words, photos. President-elect Joe Biden points to his medical boot as he arrives at The Queen theater, Tuesday, Dec. 1, 2020, in Wilmington, Del. (AP PhotoAndrew Harnik)

VIRUS OUTBREAK-US SURGE — Nearly 37,000 people died of COVID-19 in the U.S. in November, the most in any month since the dark early days of the pandemic, engulfing families in grief, filling up obituary pages of small-town newspapers and testing the capacity of morgues, funeral homes and hospitals. By Tammy Webber and Heather Hollingsworth. SENT: 800 words, photos.

KLAIN PROFILE — Ron Klain has checked all the boxes of a classic Washington striver: Georgetown, Harvard Law, Supreme Court and Capitol Hill staffer, White House adviser and, along the way, of course, lobbyist and lawyer. Now he is preparing to serve as President-elect Joe Biden’s chief of staff, a job often referred to as the nation’s chief operating officer. By Ashraf Khalil and Laurie Kellman. SENT: 1,540 words, photos. An abridged version of 1,080 words is also available.

BIDEN-SENATE CONFIRMATION — Biden’s Cabinet picks are quickly running into the political reality of a narrowly controlled Senate that will leave the new Democratic administration dependent on rival Republicans to get anything done. By Congressional Correspondent Lisa Mascaro. SENT: 850 words, photos. 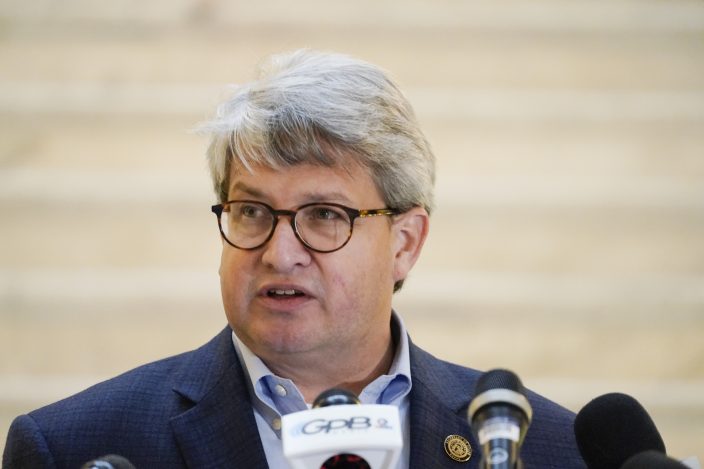 POLAND-WOMEN’S-REVOLT — Poland is facing one of the biggest protest movements since the collapse of Communism three decades ago. It erupted after the country’s constitutional court, packed by loyalists of the conservative ruling party, attempted to further tighten one of the world’s most restrictive abortion laws. Some say that the women-led protest feels a revolutionary moment that signals a deeper generational change, while the opposition and protesters hope it might eventually bring the populist government down. By Vanessa Gera. SENT: 1,020 words, photos.

SPORTS-COMING-OUT-THE-REALITY — Decades after David Kopay and Ian Roberts came out, both men are united in their disappointment that a higher proportion of gay athletes haven’t come out publicly, and that homophobic language in sports is still a sad reality. By Sports Writer Dennis Passa. SENT: 1,010 words, photos. 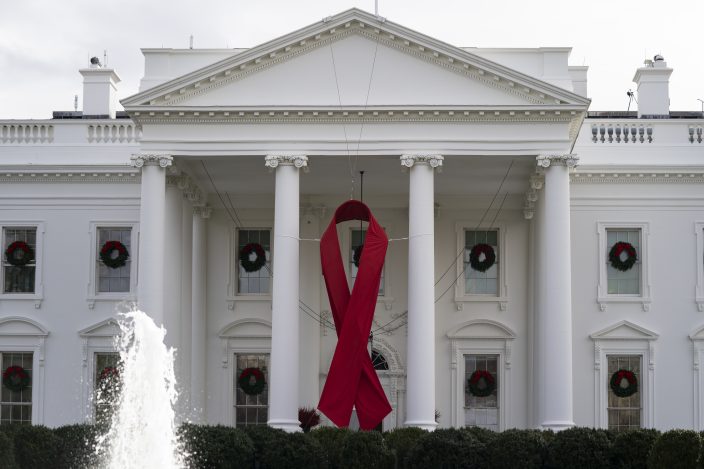 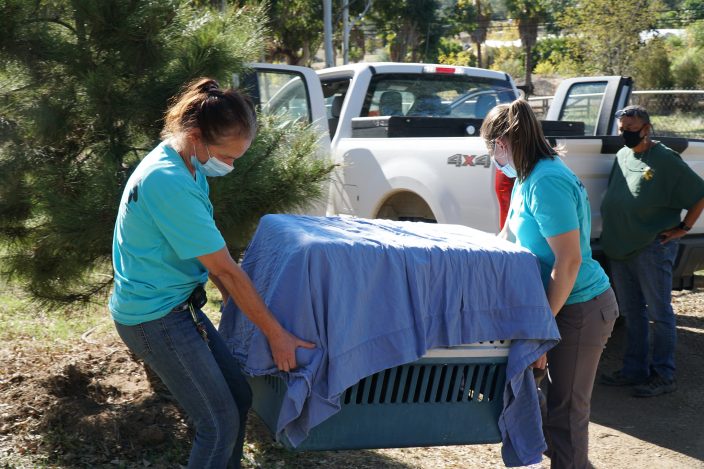 VIRUS OUTBREAK-CONGRESS — Top Senate Republican Mitch McConnell says he’s sticking with his scaled-back COVID-19 relief bill with the goal of passing a significant down payment during the lame-duck session and then revisiting the topic next year. SENT: 1,000 words, photos.

VIRUS-OUTBREAK-LOS-ANGELES — The city of Pasadena has kept outdoor dining open despite Los Angeles County restricting restaurants to takeout to reduce the spread of the coronavirus. SENT: 1,050 words, photos.

VIRUS OUTBREAK-ASIA — South Korean officials are urging people to remain at home if possible and cancel gatherings large and small as around half a million students prepare for a crucial national college exam. SENT: 320 words, photos. With VIRUS-OUTBREAK-THE-LATEST.

PARDON-BRIBERY SCHEME — The Justice Department is investigating whether there was a secret scheme to lobby White House officials for a pardon as well as a related plot to offer a hefty political contribution in exchange for clemency, according to a court document. SENT: 350 words, photo.

TRUMP-SOCIAL MEDIA — President Donald Trump is threatening to veto a defense policy bill unless it ends protections for internet companies that shield them from being held liable for material posted by their users. SENT: 260 words, photo.

THAILAND-POLITICS — Thailand’s highest court is set to rule on whether Prime Minister Prayuth Chan-ocha has breached ethics clauses in the country’s constitution and should be ousted from his position. SENT: 670 words, photos.

GERMANY-CAR-ATTACK — German police say that a man who zig-zagged an SUV at high speed through a pedestrian zone in the southwestern city of Trier, killing five people including a 9-month-old baby and seriously injuring more than a dozen, has started talking to them. SENT: 250 words, photos.

CHINA-METOO LAWSUIT — A Chinese woman who filed a sexual misconduct lawsuit against a TV host told dozens of cheering supporters at a courthouse she hopes her case will encourage other victims of gender violence in a system that gives them few options to pursue complaints. SENT: 360 words, photos.

YE-TOP PHOTOS 2020 — The world that AP photographers captured in 2020 was beset by every sort of catastrophe — natural and unnatural disaster, violent and non-violent conflict. And, in every corner of that world, the coronavirus. SENT: 360 words, photos.