Baker Mayfield made some head-scratching, jaw-dropping mistakes Sunday in Jacksonville, turning what should have been a fairly routine win for the Browns into a nail biter.

Despite his errors, Mayfield didn't commit a quarterback's biggest sin: an interception. 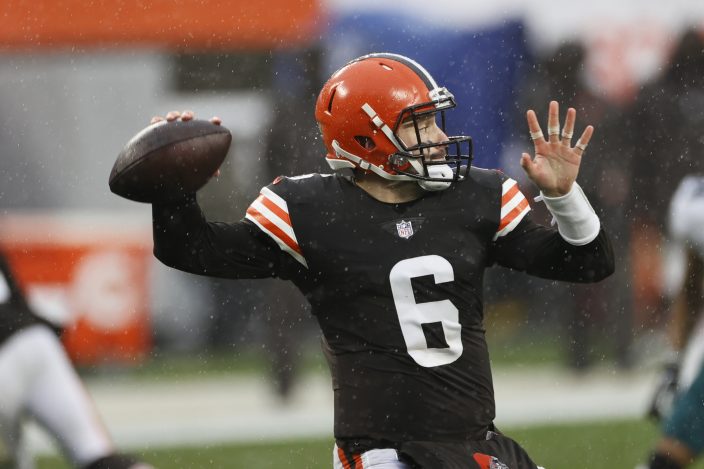 Cleveland Browns quarterback Baker Mayfield throws during the first half of an NFL football game against the Philadelphia Eagles, Sunday, Nov. 22, 2020, in Cleveland. (AP PhotoRon Schwane)

Mayfield, whose 21 interceptions were the second most in the NFL last season, hasn't thrown a pick since Oct. 25 — a span of almost five games and 123 consecutive passes. The Browns (8-3), who currently have the No. 5 playoff spot heading into this Sunday's game against Tennessee, have gone 4-1 during Mayfield's modest streak.

He'd love to follow his no-interception November with a similar December.

“It’s knowing when to be aggressive and putting us in the best position to win, and that’s taking care of the ball, and that’s what I’ve been harping on and will certainly continue to do that,” he said after practice Wednesday. 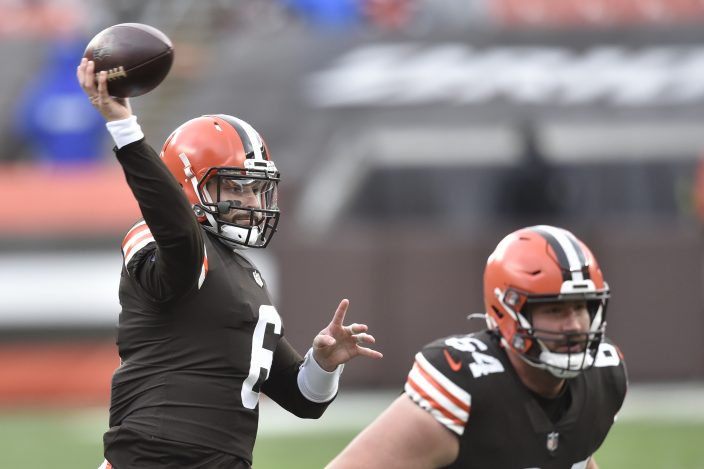 Cleveland Browns quarterback Baker Mayfield (6) throws against the Houston Texans during the first half of an NFL football game, Sunday, Nov. 15, 2020, in Cleveland. (AP PhotoDavid Richard)

It's a sign of growth and improvement for the third-year QB, who is still plagued by inconsistency but is making winning plays this season while positioning the Browns to possibly end their 18-year playoff absence.

“Yeah, it is a big deal,” coach Kevin Stefanski said. “It is going to be a big deal this week again versus a team that is plus-11 (in turnovers).” 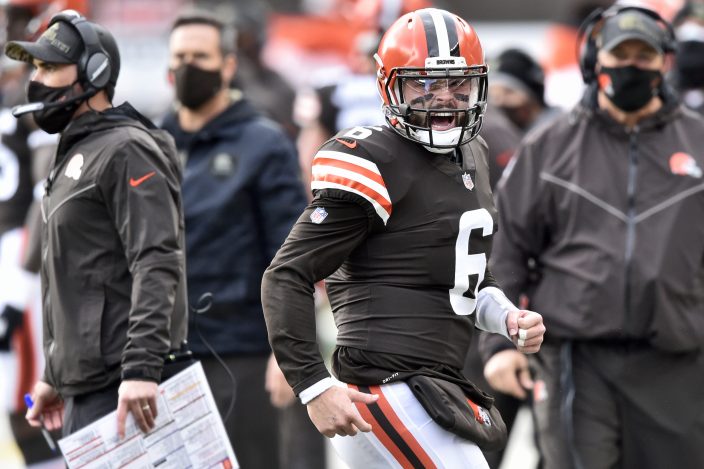 Cleveland Browns quarterback Baker Mayfield (6) reacts during the first half of an NFL football game against the Houston Texans, Sunday, Nov. 15, 2020, in Cleveland. (AP PhotoDavid Richard)

Stefanski credits Mayfield for working hard at fixing his flaws. He's not quite the gun slinger he once was, more of a game manager, but that's not to say he doesn't occasionally take a risk by throwing a pass into close coverage.

“You have to always as a quarterback straddle that fine line of being aggressive and smart, and I think he has done a nice job the last few weeks,” Stefanski said. "And even in that last game, he threw some tight-window balls that had to be perfect and they were. He is doing a nice job of that regard.”

While he's cut down on the turnovers, Mayfield, who has seven picks in 2020, occasionally forces throws and misses others he shouldn't — ones that elite quarterback don't miss.

In the first half Sunday, he badly overthrew wide receiver Rashard Higgins in the end zone on what could have been one of the easiest touchdowns of his career. Higgins didn't have a defender within yards, but Mayfield didn't see him initially and when he finally did, his throw sailed high.

On the same series, he overthrew receiver Jarvis Landy in the corner and the Browns settled for a field goal.

Then, during a critical sequence in the fourth quarter, Mayfield threw behind running back Kareem Hunt on a third-and-short play. The incompletion was followed by Stefanski gambling and not kicking a field goal, only to have the Browns get stopped on fourth down, giving the Jaguars new life.

Mayfield was critical of his play after the game. Days later, he's still stinging from his miscues.

“That game was closer than I wanted it to be because of some of the mistakes that I made, so that’s why I was hard on myself,” he said. ”I’m trying to get better each week. That’s taking care of the ball and that’s completing these passes that should be made in my sleep.”

Mistakes aside, Mayfield looks a lot different that the quarterback the Titans mauled in last season's opener.

“He settled into this scheme and what they’re asking him to do,” Tennessee coach Mike Vrabel said. "He’s doing a lot of good things at the line of scrimmage, getting them into good plays that they want to run. You can see his operation.

“He’s just a lot more comfortable there. He has taken care of the football, which has allowed them to be at the top of the turnover margin in the league.”

NOTES: The Browns closed their facility for a few hours Wednesday after an unidentified staff member tested positive for COVID-19. ... Stefanski said S Ronnie Harrison did not suffer a fracture when he injured his shoulder against the Jaguars, his former team. Harrison was placed on injured reserve and he'll miss “multiple weeks,” but the Browns are hoping he's back in 2020. ... CB Denzel Ward (calf) was the only eligible player not to practice. He's expected to miss at least one more game. ... LB Sione Takitaki and DEs Porter Gustin and Joe Jackson remain on the COVID-19 list.

US NTSB team arrives in Indonesia to look into jet cras ...