The Tennessee Titans are clicking at a pretty high level offensively, and a lot of the credit goes to Derrick Henry.

Just don't make the mistake of thinking the Titans are a run-only offense.

Tennessee has been looking for years for top wide receivers, and the Titans now have two in A.J. Brown and Corey Davis. They keep making key catches while also blocking for the NFL's leading rusher, a combination that has the Titans (8-3) the NFL's sixth-best offense in scoring 29.5 points a game. 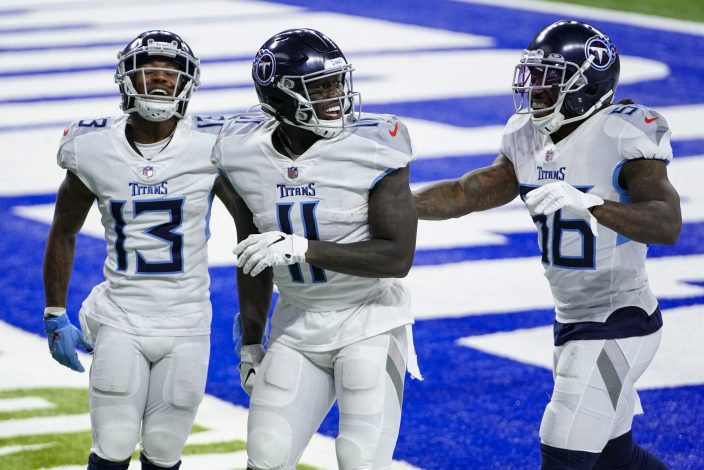 Tennessee Titans wide receiver A.J. Brown (11) celebrates returning an onside kick for a touchdown against the Indianapolis Colts with wide receiver Cameron Batson (13) and lDaren Bates in the second half of an NFL football game in Indianapolis, Sunday, Nov. 29, 2020. (AP PhotoAJ Mast)

The Cleveland Browns (8-3) get to defend the Titans' duo and the rest of this potent offense Sunday.

“That’s what makes this a big challenge because this is a very, very good offense, and it’s not a one-man show,” Browns coach Kevin Stefanski said Wednesday. “They have the ability to throw it to (those) guys ... They have a really good trigger man. I don’t think you can key in on one guy because they can hurt you in multiple ways.”

Davis, the No. 5 pick overall in 2017, has a team-high 42 catches. Brown, a second-round selection out of Ole Miss in 2019, leads Tennessee with 638 yards receiving and eight TD catches. Brown is averaging a team-high 18 yards per catch followed closely behind by Davis averaging 14.7 yards a catch. 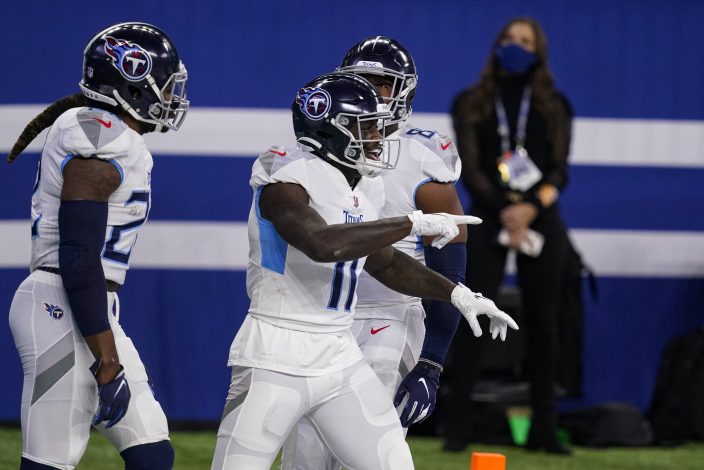 Tennessee Titans wide receiver A.J. Brown (11) celebrates a touchdown against the Indianapolis Colts in the first half of an NFL football game in Indianapolis, Sunday, Nov. 29, 2020. (AP PhotoDarron Cummings)

Titans quarterback Ryan Tannehill says it's huge having such production from Davis and Brown.

"Both of those guys are extremely talented and have been huge for us all year, so being able to have two weapons like that is huge,” Tannehill said. "They can’t key in on one guy, try to take away one guy. They have to honor both sides of the field. So I’m lucky and I call it a blessing to be able to share the field with those guys.”

Brown has gotten plenty of attention after leading rookies with 1,051 yards receiving last season, the third-best rookie season in team history. Nobody in franchise history has had more than Brown's 16 TD catches through the first 25 games of his career.

The 6-foot-1, 226-pound Brown also is a perfectionist. After uncharacteristic drops in a Nov. 12 loss to Indianapolis, Brown couldn't wait for the rematch. He scored twice in a 45-26 rout of the Colts last week and led the Titans with four catches for 98 yards.

“Oh, I replayed it," Brown said of his drops. “It was in my mind for like two weeks, to be honest. It was definitely a rough week. I was just trying to just shade back. But I have learned it’s week to week, some highs and lows. You’ve got to appreciate the lows because it gives you more motivation.”

The 6-foot-3, 209-pound Davis was the first receiver selected in the 2017 draft. As much as they've liked the physical receiver's run-blocking — Davis can be seen downfield doing just that on many of Henry's TD runs — they didn't pick up his fifth-year option for 2021.

He's also clutch with 67 of his 85 catches since the start of the 2019 season going for first downs, a 78.8% conversion rate that puts him fourth in the NFL in that span.

Davis has had three 100-yard receiving games this season despite going on the reserve/COVID-19 list Oct. 7 and losing his older brother, Titus, to rare kidney cancer Nov. 11. Davis said it's huge that both he and Brown are playing well this season.

“But we have a lot of talent, a lot of talented players on both sides of the ball," Davis said. “And now one week it might be yours to go off, and it might be the other guy’s. So we’ve got to do our part to stay in it mentally and physically.”