Neymar scored early and late at Old Trafford as Paris Saint-Germain won 3-1 in the latest bout of a fierce Champions League rivalry to take control of its destiny in Group H.

United was left to regret not substituting midfielder Fred who seemed lucky not to be sent off in the first half when head-butting PSG’s Leandro Paredes. 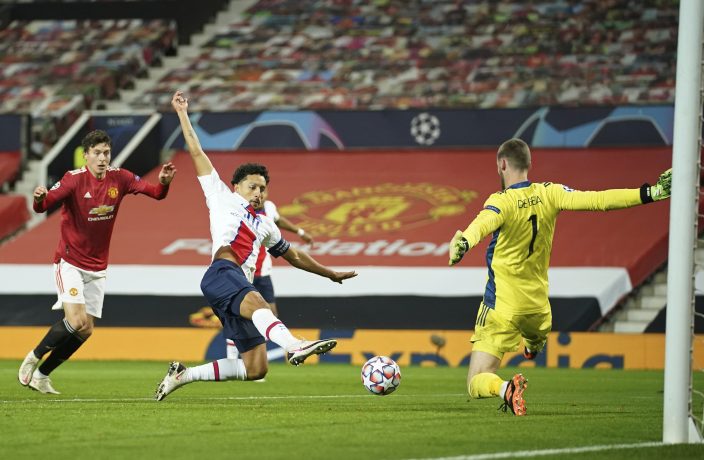 Fred finally saw a red card in the 70th minute just as United tried to come back from PSG taking a 2-1 lead through another Brazilian, Marquinhos.

PSG and United are joined on nine points by Leipzig, which got a stoppage-time winning goal to beat İstanbul Başakşehir 4-3 in a thrilling game.

United has perhaps the toughest task in the final games next Tuesday, traveling to Leipzig while PSG hosts Başakşehir. 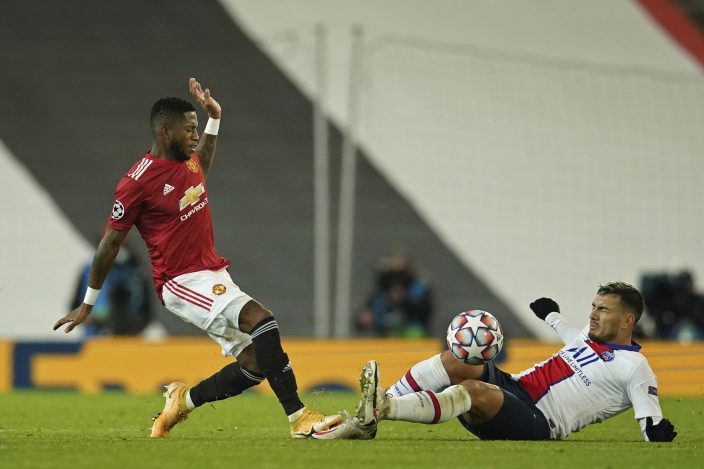 Borussia Dortmund was the only team to advance Wednesday, drawing 1-1 at home against Lazio to become the ninth team in the round of 16.

Juventus was already safely into the next round before Ronaldo marked his 750th goal for his clubs and Portugal. It was a simple tap-in at the far post in a 3-0 win over Dynamo Kyiv.

Chelsea and Sevilla had also advanced before Giroud tore apart the Spanish side on its home turf. The France forward’s perfectly balanced quadruple came from shots with his right and left feet, a header, and then from the penalty spot. 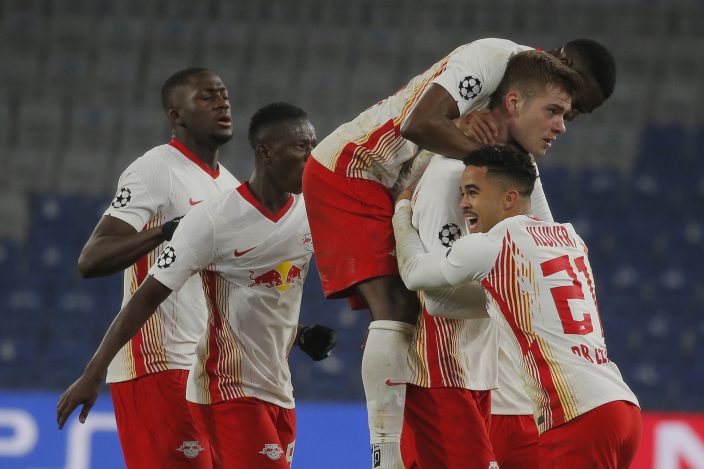 Like Real Madrid on Tuesday, Man United lost to leave itself a tense last-round challenge just to qualify for the knockout stage in February.

United recovered well from Neymar’s sixth-minute opener and leveled before halftime from Marcus Rashfiord’s deflected shot before coming out strong in the second half. 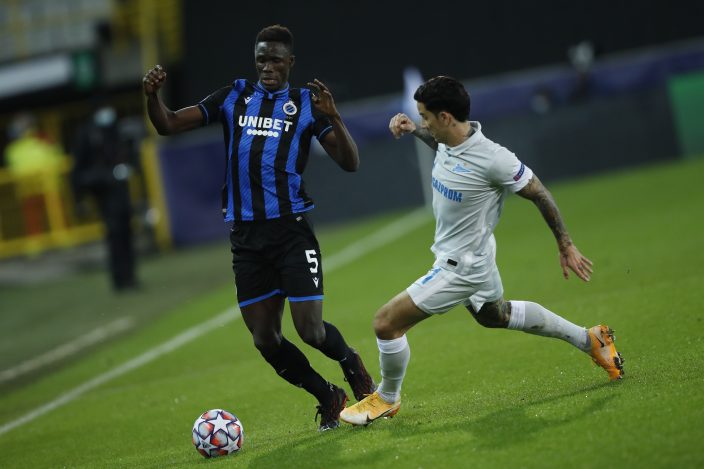 But a chipped shot by Edinson Cavani, PSG’s record goalscorer who joined United this season, came back off the crossbar and Anthony Martial skied a clear chance minutes later.

PSG then deservedly retook the lead and after Fred’s dismissal, a third goal looked likely even before Neymar rolled the ball into an unguarded goal in stoppage time.

Leipzig’s late goal in Istanbul changed the calculations. Substitute Alexander Sörloth struck just minutes after the ball had rebounded off his face to hit the crossbar of Başakşehir’s goal. 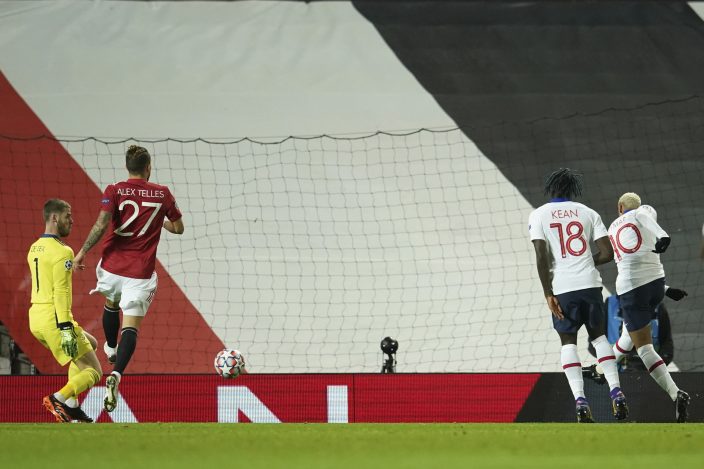 It was tough on Başakşehir’s İrfan Can Kahveci who completed an impressive hat trick in the 85th minute to cancel Leipzig’s lead for a second time.

In the most lopsided group, Barcelona was able to rest Lionel Messi against Ferencvaros and still score all its goals in the first half hour in a 3-0 win. 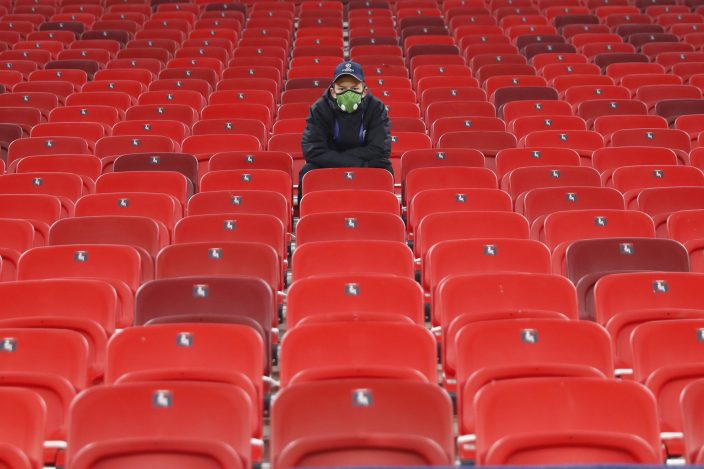 A technical staff sits on empty stands ahead of the Champions League group G soccer match between Ferencvaros and Barcelona at the Ferenc Puskas stadium in Budapest, Hungary, Wednesday, Dec. 2, 2020. (AP PhotoLaszlo Balogh)

The most significant detail of Juve’s routine 3-0 win over Dynamo Kviv was the history made by the referee.

Barcelona has five straight wins and leads Juve by three points before they meet in Spain next Tuesday to decide who tops the group. Group winners are seeded in the last-16 draw and play the second leg at home. 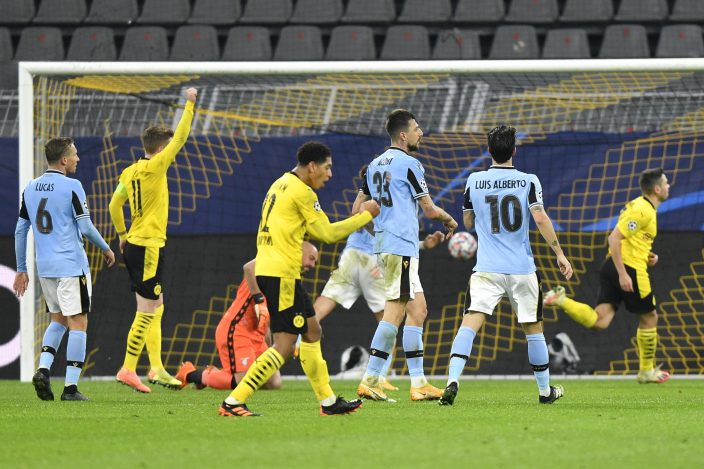 If Messi and Ronaldo both play, it will be the veterans’ first meeting in the group stage.

Krasnodar’s 1-0 win at home to Rennes was the Russian club's first in its debut Champions League campaign. It assured Krasnodar of third place in the group behind Chelsea and Sevilla, and means it will enter the Europa League's last 32. 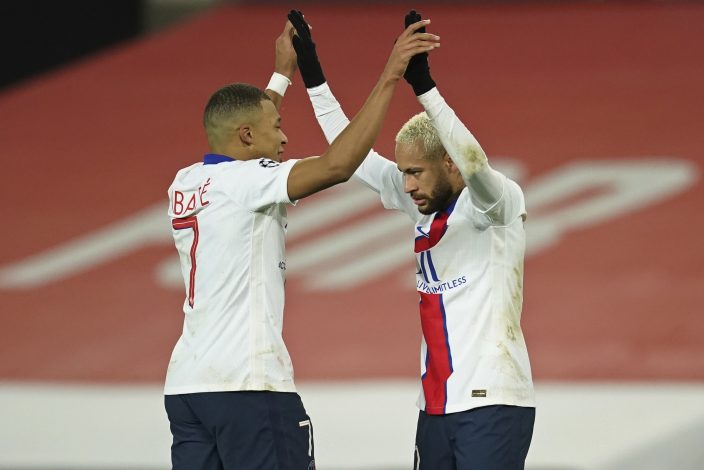 It was also a first victory this season for any of the six Russian clubs that entered the two European competitions.

Later, Russian champion Zenit St. Petersburg lost 3-0 at Club Brugge to stay rooted to the bottom of Group F despite being the top-seeded team. Zenit cannot qualify for the Europa League.

Brugge can join Dortmund in advancing from Group F, if it beats Lazio in Rome next Tuesday.