The World Series champion Los Angeles Dodgers acquired reliever Corey Knebel from the Milwaukee Brewers on Wednesday for a player to be named or cash.

Milwaukee had been facing a Wednesday night deadline on whether to offer Knebel a 2021 contract. Brewers president of baseball operations David Stearns said the deal was completed before that deadline.

The 29-year-old Knebel was an All-Star in 2017 and a key part of the Brewers' bullpen during their run to the 2018 NL Championship Series. The right-hander missed the 2019 season with a torn ulnar collateral ligament in his pitching elbow and struggled after returning last season. 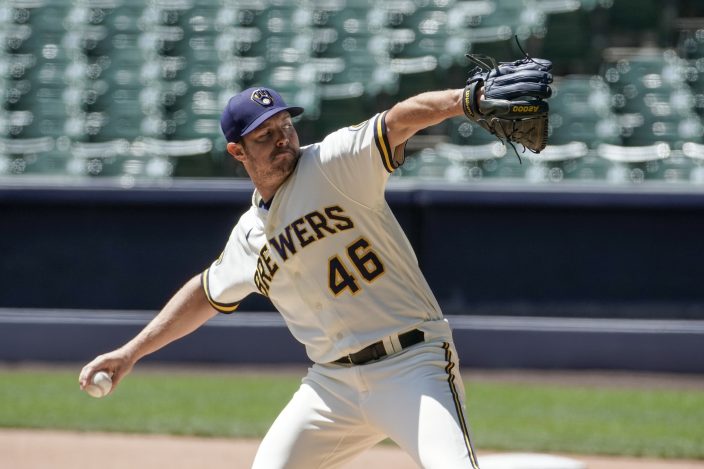 “Corey had a tremendous career as a Brewer,” Stearns said. “He pitched in some of the biggest games in the history of this franchise, and he pitched incredibly well in those games. ... Corey's meant a lot to this franchise. He's earned the respect of a lot of people around the Brewers, and we wish him very well."

The 2013 first-round draft pick has a career ERA of 3.31 with 57 saves in 239 relief appearances. He pitched eight games for Detroit in 2014 and had been with Milwaukee ever since.

In another move, a person familiar with the situation told The Associated Press that the Brewers have agreed to terms on a major league contract with catcher Luke Maile. The person spoke on condition of anonymity Wednesday because the deal had not been announced.

Maile, who was with the Pittsburgh Pirates last season, missed the entire abbreviated season due to a broken right index finger. The 29-year-old played for Tampa Bay from 2015-16 and Toronto from 2017-19.

He is well-regarded for his defense and has a career batting average of .198 with 10 homers and 60 RBIs in 215 games.

The Brewers struggled to get much from their catchers last season.

Narváez was coming off a 22-homer season when the Brewers acquired him from Seattle in December 2019, but he batted just .176 with two homers and 10 RBIs over 40 games with Milwaukee.