In fact, the quarterback had to admit his coach had a point.

“If he was lying, I’d feel differently about it," Goff said Wednesday. "He’s absolutely right. I’m a big boy. I can handle it.” 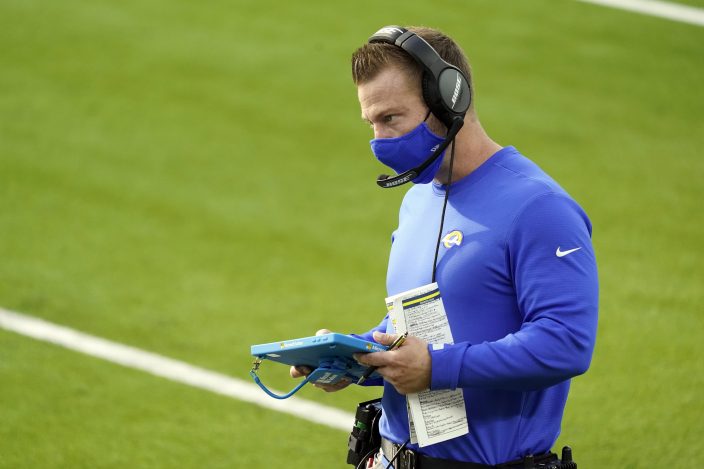 Goff has 10 turnovers in his last four games for the Rams (7-4), who slipped out of first place in the NFC West last weekend with a 23-20 home loss to San Francisco in which Goff threw two interceptions and lost a fumble. One of his interceptions was returned 27 yards for a touchdown by rookie Javon Kinlaw.

McVay almost always avoids any public criticism of any Rams employee except himself, but he voiced his frustration with Goff's carelessness Sunday: “Our quarterback has got to take better care of the football.”

McVay said he went against his normal public policy because he thought Goff would handle the challenge correctly by striving to be better. Judging by Goff's response Wednesday, the quarterback is taking it the right way.

Goff hasn't been taking care of the ball lately, however: His 14 turnovers this season are tied with Minnesota's Kirk Cousins for second-most in the NFL, behind only 18 by Philadelphia's Carson Wentz.

Goff also is in a mini-slump as the Rams begin the five-game push toward the playoffs with a visit to the Arizona Cardinals (6-5) on Sunday for an important divisional showdown. In Los Angeles' last four games, the fifth-year quarterback has thrown four touchdown passes and six interceptions while losing four fumbles, getting sacked seven times and posting a 79.7 passer rating.

Goff went 19 of 31 for 198 yards against the Niners, matching his least productive passing game of the season by yardage.

“You try to limit them and move on, but for the 24 hours after it, I was not in a happy place, for sure,” Goff said of his mood on Monday. "Really, really disappointed in myself, but you move on. We’ve got a big game this week. You move on, you play well, and then you just keep moving on. That’s all you can do and stay confident, and it’s just part of the game.”

McVay said he never considered benching Goff during his rough stretches against the 49ers — no surprise considering Goff's backups, John Wolford and Bryce Perkins, have never taken an NFL snap.

The Rams and Goff are tied together for the next four seasons in his $134 million contract extension, so McVay and his franchise quarterback are determined to get it right again, starting in Glendale. Goff had a similar midseason slump last year, but broke out of it in the final five games — starting with a 424-yard, two-touchdown performance in Week 13 at Arizona.

“One of the things that you do really appreciate about him is he steady, he’s neutral,” McVay said about Goff. “He’s coming back ready to go, and that’s what you want. You don’t want somebody that’s going to ride the emotional roller coaster. I think there’s too many ebbs and flows, especially at that quarterback position. I am looking forward to seeing him bounce back.”