In a quest to root out Islamic State group hideouts over the summer, Iraqi forces on the ground cleared nearly 90 villages across a notoriously unruly northern province. But the much-touted operation still relied heavily on U.S. intelligence, coalition flights and planning assistance.

While the planned U.S. troop drawdown in Iraq from 3,000 to 2,500 by mid-January is unlikely to have an immediate impact on the campaign against IS remnants, there are concerns that further withdrawals could set the stage for another resurgence of the extremist group.

Although Iraqi forces have become more independent in combat missions, the country is reeling from ongoing anti-government protests, rampant corruption and political divisions that reach into the security apparatus. All of that means foreign support is still crucial. 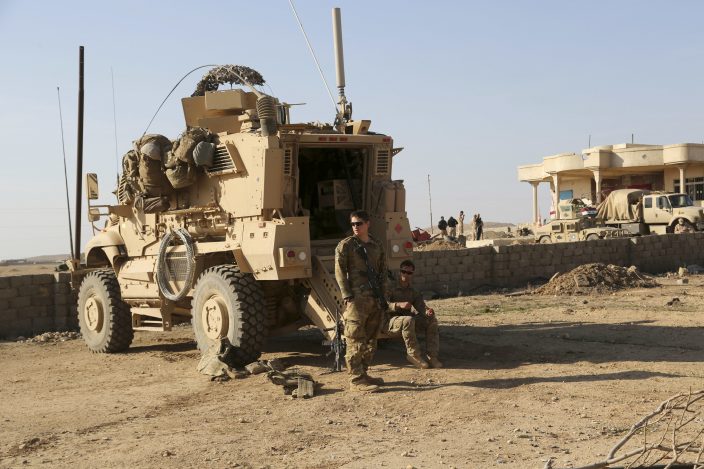 FILE - In this Feb. 23, 2017 file photo, U.S. Army soldiers stand outside their armored vehicle on a joint base with the Iraqi army, south of Mosul, Iraq. In a quest to root out Islamic State group hideouts over the summer, Iraqi forces on the ground cleared nearly 90 villages across a notoriously unruly northern province. But the much-touted operation still relied heavily on U.S. intelligence, coalition flights and planning assistance. (AP Photo Khalid Mohammed, File)

There are already signs of a possible Islamic State comeback as the group exploits security gaps widened by a year of protests and the pandemic. It's a worrying trend for Iraq’s security forces, whose collapse in 2014 allowed IS to seize a third of the country and sent American troops rushing back less than three years after they had withdrawn.

So how could the American drawdown help IS and Iran? Here are three key ways. 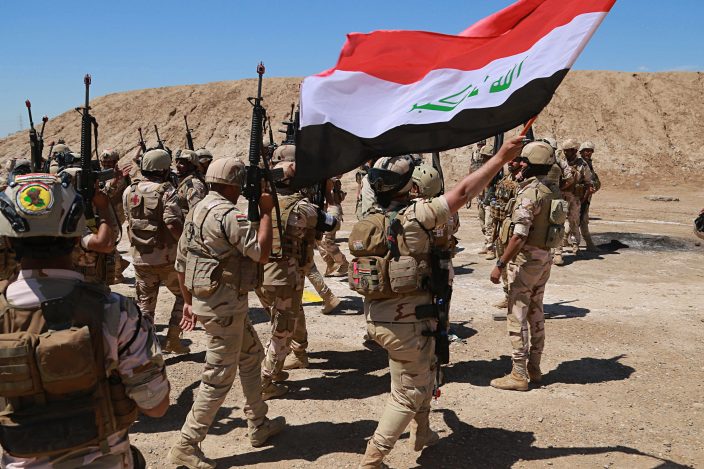 FILE - In this April 17, 2019, file photo, Iraqi soldiers chant slogans against IS while Australian and New Zealand coalition forces participate in a training mission with Iraqi army soldiers at Taji Base, north of Baghdad, Iraq. In a quest to root out Islamic State group hideouts over the summer, Iraqi forces on the ground cleared nearly 90 villages across a notoriously unruly northern province. But the much-touted operation still relied heavily on U.S. intelligence, coalition flights and planning assistance. (AP PhotoHadi Mizban, File)

American forces returned at the invitation of the government after IS seized much of northern and western Iraq, including its second largest city, Mosul. A U.S.-led coalition provided crucial air support as Iraqi forces, including Iran-backed militias, regrouped and drove IS out in a costly three-year campaign.

Pressure has been escalating for a U.S. troop withdrawal since the defeat of IS in 2017, particularly among Iraqi factions loyal to Iran, which have stepped up attacks on U.S. interests. Both the U.S. and Iraq are in favor of a scheduled withdrawal but have been unable to agree on specifics.

Senior Iraqi military officials in Baghdad say the withdrawal of 500 American troops will have little, if any, impact. But local officials in areas liberated from IS, where reconstruction has lagged and services have yet to be fully restored, fear a security vacuum if the Americans leave.

“It’s true we have a stronger army, stronger security forces,” said Najm Jibouri, the governor and former head of provincial operations in Nineveh, which includes Mosul. “But we still need training, support with intelligence gathering.”

Iraq’s security apparatus is still plagued by many of the same vulnerabilities that enabled the rise of IS, including poor coordination among different branches and rampant corruption. Tensions have mounted as Iran-backed Shiite militias — now incorporated into the armed forces — have accumulated more and more power.

“These vulnerabilities remain and risk weakening the Iraqi armed forces when they are most needed,” Benedicte Aboul-Nasr, project officer at U.K.-based Transparency International — Defence and Security, wrote in a recent analysis.

There's more. The Iraqi military has also reduced its troop presence in some areas because of the coronavirus pandemic, and the U.S. has withdrawn from some northern bases after rocket attacks blamed on Iran-backed groups.

IS lost the last territory under its control in 2017 but quickly returned to its insurgent roots, carrying out hit-and-run attacks on Iraqi forces across a wide stretch of territory in the north.

A longstanding political and territorial dispute between the central government and the semi-autonomous Kurdish authority in the north has hindered coordination against IS. The U.S. has long served as a mediator, a role that would be difficult to fill if it were to completely withdraw.

IS has also struck further south, including an attack on a convoy in Hilla, south of Baghdad, on Nov. 10 that killed and wounded more than a dozen Iraqi soldiers and paramilitary forces. Last week, it claimed a rocket attack that temporarily halted oil production in a small refinery north of the capital.

An Iraqi military commander, speaking on condition of anonymity because he was not authorized to brief media, said the country sees five to six attacks every week. “These attacks have not been to hold and control land, but to attack and go back into hiding," he said.

A previous incarnation of IS staged similar attacks in the years before the group exploited the chaos in neighboring Syria to seize large parts of both countries.

A wider American withdrawal would also enable Iran to deepen its influence in Iraq, where it already has strong political, economic and security ties forged since the U.S.-led invasion that toppled Saddam Hussein in 2003.

The U.S. has waged a “maximum pressure” campaign against Iran since the Trump administration unilaterally withdrew from Tehran's nuclear agreement with world powers in 2018 and restored crippling sanctions.

President-elect Joe Biden has said he hopes to return to the agreement while also addressing Iran's military involvement in Iraq and elsewhere in the Middle East. A significant drawdown of U.S. forces in Iraq — while popular at home — could reduce his leverage.

Mine OK'd in Trump's last days may boost Bide ...

One of the keys to President Joe B ...

When Kylian Mbappe's two goals too ...