No one who saw it will forget Valery Giscard d’Estaing’s imperious exit from the Elysee Palace. Seated alone at his desk, he offered a stiff televised farewell to the French who had voted him out of office, then stood and left the room. For 45 seconds, the camera kept rolling on an empty chair.

Eventually, the former French president refashioned himself as elder statesman for a united Europe, a veteran of World War II who befriended German chancellors and helped lay the groundwork for the shared euro currency. Tributes poured in from France and around Europe on Thursday after he died Wednesday of complications from COVID-19 at age 94.

“France has lost a statesman, Germany a friend and all of us a great European,” German Chancellor Angela Merkel said in a tweet, via her spokesman. 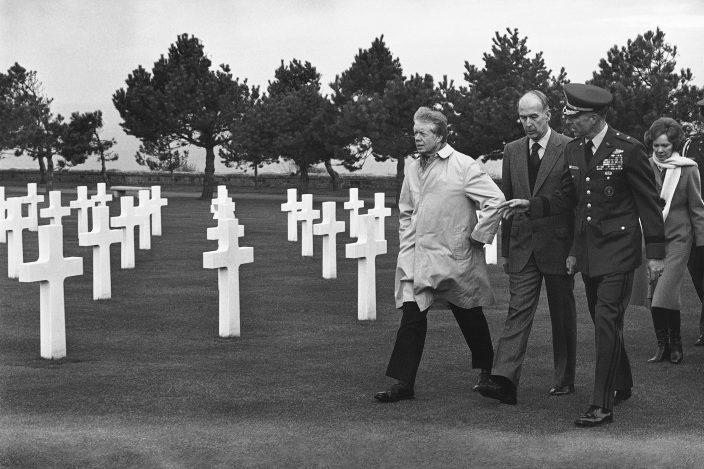 FILE - In this Jan.5, 1977 file photo President Jimmy Carter, French President Valery Giscard d'Estaing and Brig. General John Donaldson, chairman, American Battle Monuments Commission, walk past the graves of American soldiers killed in the invasion of the Normandy beaches during World War II. Valery Giscard d’Estaing, the president of France from 1974 to 1981 who became a champion of European integration, has died Wednesday, Dec. 2, 2020 at the age of 94, his office and the French presidency said. (AP Photo, File)

“He allowed young people to vote from the age of 18, women to legally terminate unwanted pregnancies, divorce by mutual consent, got new rights for people with disabilities.” But he also “worked for a stronger Europe, a more united Franco-German couple, and helped stabilize international political and economic life by founding the G-7.”

Prime Minister Jean Castex praised his leadership during the economic turbulence of the 1970s, during which he “significantly advanced the building of Europe and the international influence of France, whose history he marked.” 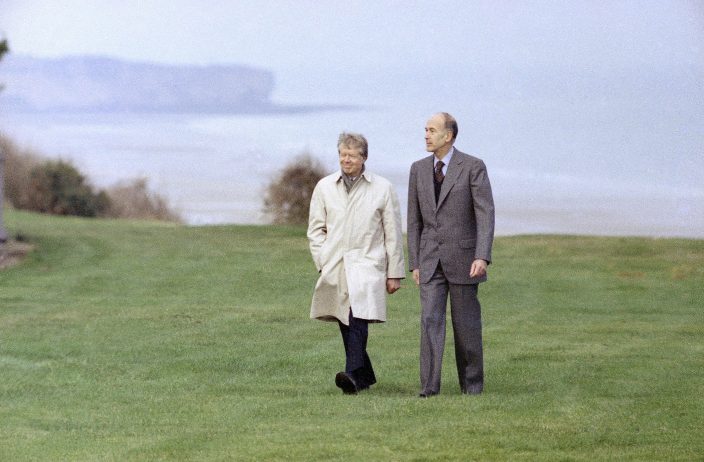 FILE - In this Jan,5, 1978 file photo, President Jimmy Carter walks with French President Valery Giscard D'Estaing at Omaha Beach, Normandy, in France. Valery Giscard d’Estaing, the president of France from 1974 to 1981 who became a champion of European integration, has died Wednesday, Dec. 2, 2020 at the age of 94, his office and the French presidency said. (AP Photo, File)

Known affectionately in France as simply by the initials VGE, his name sometimes too long to pronounce, Giscard was president from 1974-1981. He was the model of a modern French president, a conservative with liberal views on social issues.

He was full of contradictions. Like an elected monarch with a technocrat’s skill and a feel for the zeitgeist, he played his accordion in working class neighborhoods. One Christmas morning, he invited four passing garbage men to breakfast at the presidential palace. He calmed a prison riot in Lyon by chatting with inmates in their cells.

But having long groomed himself for an office he won at 48, Giscard then seemed to lose touch with common concerns. When two newspapers reported he had accepted diamonds from self-proclaimed Central African Emperor Bokassa I, Giscard airily refused comment and stopped reading them. After French police arrested the man who had produced documents related to the scandal, the influential Le Monde commented, “France is no longer a democracy.” 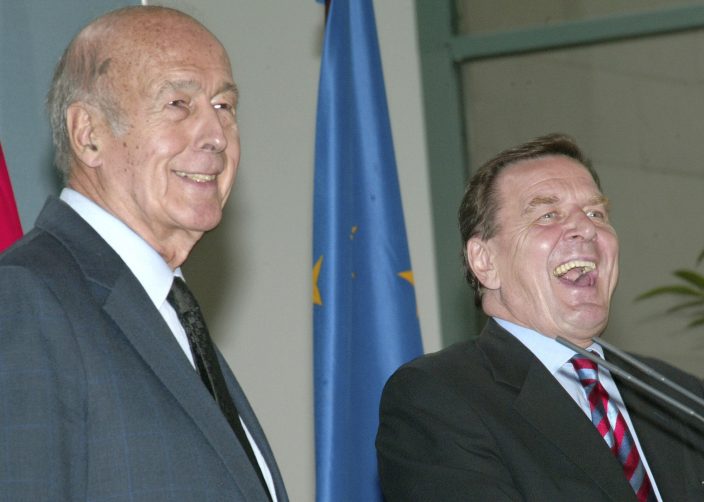 FILE - In this Sept.9, 2003 file photo, German Chancellor Gerhard Schroeder, right, and then French President of the European Convention, Valery Giscard d' Estaing share a laugh in the Berlin Chancellery. Valery Giscard d’Estaing, the president of France from 1974 to 1981 who became a champion of European integration, has died Wednesday, Dec. 2, 2020 at the age of 94, his office and the French presidency said. (AP PhotoFritz Reiss, File)

Giscard eventually countered the charges. But by then a new election was approaching, and France wanted a change. He lost to Francois Mitterrand in 1981, after just one term.

Born in 1926 in Koblenz, Germany, where his father was a financial director of the post-World War I French occupation administration, he grew up with a pan-European view. After joining the French Resistance during World War II, he next saw Germany as a tank commander in the French military in 1944.

In 1952, he married Anne-AymoneIt de Brantes, the daughter of a count and heiress to a steel fortune. They had four children: Valerie-Anne, Louis, Henri and Jacinte. 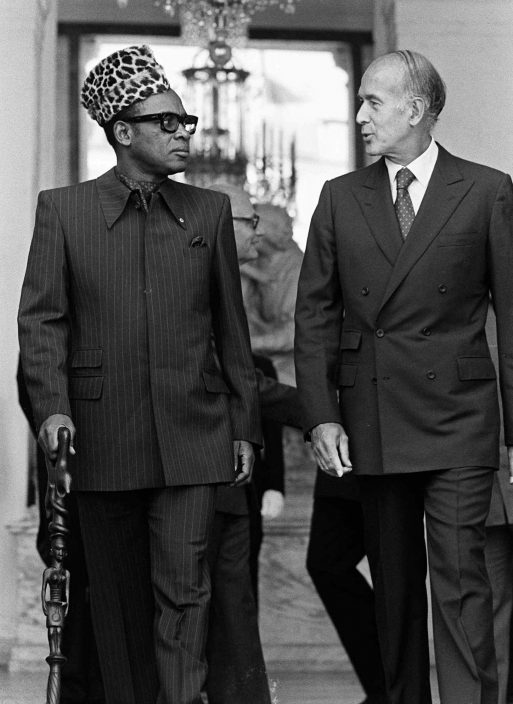 In this Sept.6, 1979 file photo, Zaire's President Mobutu Sese Seko, left, walks with French President Valery Giscard d'Estaing after a meeting at the Elysee Palace in Paris. Valery Giscard d’Estaing, the president of France from 1974 to 1981 who became a champion of European integration, has died Wednesday, Dec. 2, 2020 at the age of 94, his office and the French presidency said. (AP Photo, File)

Giscard studied at the prestigious Polytechnical Institute and then the elite National School of Administration, before mastering economics at Oxford.

President Charles de Gaulle named him finance minister at the age of 36.

After his defeat in the 1981 presidential election, Giscard temporarily retired from politics.

In Giscard’s two-volume “Life and Power” he revealed that for seven years after 1981, he read no French papers and watched no newscasts for fear of seeing himself attacked.

“My energy was instinctively applied to the sole purpose of protecting my life, neglecting external reality," he wrote.

He then found a second calling in the European Union. He worked on writing a European Constitution which was formally presented in 2004, but rejected by French and Dutch voters. However, it paved the way for the adoption of the Treaty on European Union in 2007.

He was a crack skier and keen hunter. Decades after he left office, a photo of his hero, John F. Kennedy, stayed in sight of his desk, along with those of Giscard and world leaders he met during his presidency. Statesmen respected his world view, expounded with the tones of a classic Frenchman bred to rule. When his stage broadened to include all of Europe, they listened.

He helped integrate Britain into what became the EU in the 1970s – and helped write the article of the EU charter that allowed Britain to leave.

On the eve of Brexit this year, Giscard told The Associated Press in an interview, “I feel great regret.” He called it a “step backward” geopolitically, but took the long view.

“We functioned without Britain during the first years of the European Union ... So we will rediscover a situation that we have already known," he told the AP.

Giscard remained unfailingly optimistic in the European project, forecasting that the EU and the euro would bounce back despite the challenges of losing a major member.

Earlier this year, a German journalist accused Giscard of repeatedly grabbing her during an interview, and filed a sexual assault complaint with Paris prosecutors. Giscard’s French lawyer said the former president retained no memory of the incident.

At age 83, he published a romance novel called “The Princess and the President,” which he said was based on Princess Diana, with whom he said he discussed writing a love story.

Asked about the nature of their relationship, he said only: “Let us not exaggerate. I knew her a bit in a climate of a confidential relationship. She needed to communicate.”

His office said his funeral will be held privately.

Angela Charlton contributed to this story.