MOSCOW -- Coronavirus infections in Russia hit a new record on Thursday, as the country’s authorities reported 28,145 new confirmed cases -- the highest daily spike in the pandemic and an increase of 2,800 cases from those registered the previous day.

The country has been swept by a rapid resurgence of the outbreak this fall, with numbers of confirmed COVID-19 infections and deaths regularly hitting new highs and significantly exceeding those reported in the spring. The country’s authorities have resisted imposing a second nationwide lockdown or a widespread closure of businesses. Virus-related restrictions vary from region to region but are largely mild. 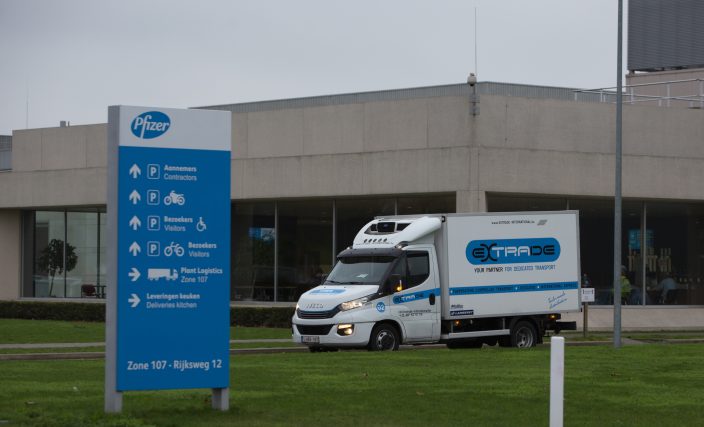 A refrigerated truck drives out of the Pfizer Manufacturing plant in Puurs, Belgium, on Thursday, Dec. 3, 2020. British officials on Wednesday authorized a COVID-19 vaccine for emergency use, greenlighting the world's first shot against the virus that's backed by rigorous science and taking a major step toward eventually ending the pandemic. (AP PhotoVirginia Mayo)

This week officials in St. Petersburg, Russia’s second largest city and one of the hardest-hit cities in the country, announced additional restrictions in an effort to curb the spread of the virus. Local authorities ordered restaurants, cafes and bars to close between Dec. 30 and Jan. 3, and museums, theaters, concert halls and exhibition spaces to shut down for the duration of the New Year holidays between Dec. 30 and Jan. 10. Restaurants, cafes and bars have to close by 7 p.m. from Dec. 25 to Dec. 29 and again from Jan. 4 through Jan. 10.

— Tokyo Olympic fans from abroad may have health tracked by app

NAIROBI, Kenya — Africa’s top public health official says 60% of the continent’s population needs to be vaccinated against the coronavirus in the next two to three years. The director of the Africa Centers for Disease Control and Prevention, John Nkengasong, told reporters that if it takes four to five years, “the virus will be endemic in our communities.”

Concerns are growing that the continent of 1.3 billion people will be near the end of the line in obtaining doses. Nkengasong isn’t sure whether vaccines will be available in Africa before the second quarter of next year. But he pushed back against vaccine misinformation, saying that “if I had my way today to take a flight to the UK and get that vaccine, I would be doing it right now.”

He says the 60% vaccination target is needed to achieve herd immunity in Africa’s 54 countries. He stressed the challenges ahead, saying “the continent as a whole has never vaccinated 200 million people in one year,” a reference to the goal of reaching 20% of the population by the end of next year. He also vowed that “no sub-standard vaccines will be in use in Africa.”

The continent now has close to 2.2 million confirmed virus cases.

BERLIN — The head of Germany’s disease control agency has slammed people who fail to respect pandemic restrictions as the number of cases in the country stagnates.

“The situation is still very tense,” Lothar Wieler of the Robert Koch Institute said Thursday. “Too many people are still getting infected.”

His agency reported 22,046 newly confirmed infections in the past 24 hours, taking the total number of known cases since the start of the outbreak to 1,106,789.

Wieler noted that authorities are again seeing large outbreaks in nursing homes, where elderly and frail people are particularly susceptible to the virus. Almost 480 deaths from COVID-19 were reported in the past day, taking the total to 17,602.

The Education Ministry says about 493,430 students began taking the one-day test at about 1,380 test sites across South Korea on Thursday. It says the test sites include hospitals and other medical facilities where the 35 virus patients and hundreds of others placed under self-quarantine will take the exam.

The annual test is a crucial step for many students’ lives in the education-obsessed country. The university from which a South Korean graduates significantly affects job prospects, social standings and even marriage partners.

This year’s test was originally scheduled for November but was delayed due to the virus outbreak.

ISTANBUL — Turkey’s health minister has announced a plan for vaccinations starting with an experimental inactivated vaccine later in December to combat the COVID-19 pandemic amid a surge in infections and deaths.

Minister Fahrettin Koca had previously announced an agreement with Chinese biopharmaceutical company Sinovac for 50 million doses of CoronaVac, with the first shipment to arrive after Dec. 11. The minister said early-use authorization would be granted after Turkish labs confirm the vaccine's safety.

“If developments continue positively as we expect, Turkey would be among the first countries in the world to begin vaccinations in the early phase,” Koca said Thursday.

Health care workers, citizens above 65 and people living in care homes will be the first groups to be vaccinated. Next will be essential workers and people above 50 with at least one chronic disease. Third will be people younger than 50 with at least one chronic illness, young adults and other workers would be vaccinated. The fourth and final phase will be for the rest of the population. Turkey’s president has said the vaccine will be administered free of charge.

In November, The Lancet published a study about the efficacy of Sinovac’s vaccine, saying efficacy was determined to be moderate.

NEW DELHI — India is reporting less than 40,000 new daily coronavirus cases for a fourth straight day as it awaits a vaccine rollout for its vast population.

With 35,551 new infections reported, India’s total confirmed cases crossed 9.5 million on Thursday. Its single-day cases have remained below the 50,000 level for more than three weeks.

The Health Ministry also reported 526 deaths in the past 24 hours, taking India’s total confirmed fatalities to 138,648.

India’s capital reported 3,944 new cases in the past 24 hours with positivity rate at a two-month low of 5%. It also recorded 82 more fatalities.

India doesn’t have any advance purchase agreement with any vaccine manufacturer.

The Serum Institute of India, which has been testing the Oxford-AstraZeneca vaccine, says it will apply for emergency approval by Indian authorities in two weeks. The institute is the world’s largest vaccine manufacturer.

UNITED NATIONS — Nearly 100 world leaders and several dozen ministers are slated to speak at the U.N. General Assembly’s special session starting Thursday on the response to COVID-19 and the best path to recovery from the pandemic which has claimed 1.5 million lives, shattered economies in countries rich and poor.

Assembly President Volkan Bozkir says when he took the reins of the assembly in September it would have been better to hold the high-level meeting in June. Nonetheless, he said Wednesday that the session “provides a historic moment for us to come together to beat COVID-19.”

NEW YORK — The head of the Centers for Disease Control and Prevention predicts the country is about to go through “the most difficult time in the public health history of the nation.”

Dr. Robert Redfield made the comment during a U.S. Chamber of Commerce Foundation webcast Wednesday.

Redfield says earlier surges in COVID-19 illnesses were concentrated in one area of the country or another, and health care workers and equipment could be shifted from one place to another to deal with it. But now, he says,all parts of the country are seeing rising infections and illnesses.

In Redfield’s words: “The reality is December and January and February are going to be rough times. I actually believe they are going to be the most difficult time in the public health history of this nation.”

SACRAMENTO, Calif. — California has reported more than 20,000 new coronavirus case, shattering the state’s previous one-day record of 18,350 as Gov. Gavin Newsom — himself quarantined at home after his family was exposed — considers a new stay-at-home order.

Following an early summer surge that prompted a new round of restrictions, California’s cases plummeted in August and September and the state relaxed restrictions, allowing more businesses to operate, indoor religious services to resume and many schools to reopen for classroom instruction.

But new cases have exploded in recent weeks. A record 8,500 people are in hospitals, including more than 2,000 in intensive care units.

ATLANTA — The head of the Centers for Disease Control and Prevention has signed off on an expert panel’s recommendation that health care workers and nursing home residents be the first to get coronavirus vaccinations when shots become available.

Experts believe that when a vaccine becomes available, doses will be limited in the first weeks and months. That will mean officials will have to decide whether certain people should be first in line. Doctors have been watching for federal advice about how priorities should be set.

On Tuesday, the Advisory Committee on Immunization Practices voted 13-1 that the first people vaccinated should be health-care workers and patients in nursing homes, long-term chronic care hospitals, and other U.S. long-term care facilities.

BOSTON -- A coalition of U.S. colleges and universities is urging Congress to pass a new coronavirus relief bill with at least $120 billion for higher education, saying the sector faces a crisis of “almost unimaginable” scale.

The letter signed by the American Council on Education and 100 other groups says financial losses caused by the pandemic are far worse than schools had expected. Colleges have laid off thousands of workers to cut costs, but the letter says the pared-down operations will unstainable without additional federal help.

Colleges have had to increase financial aid to help students who are struggling to pay tuition, and schools have lost revenue from closed dorms and dining halls.

Enrollments have also decreased amid the pandemic, with a 13% drop in freshmen across all U.S. institutions. At the same time, many states have cut their higher education budgets.

AUSTIN, Texas — The mayor of Austin, Texas, is apologizing for taking a family vacation to Mexico in November at the same time he was telling residents to stay home because of a worsening surge in coronavirus cases.

At one point during the trip to Mexico, Adler even posted a video on Facebook telling people in Austin that now was “not the time to relax” and urging them to stay home.

Texas this week surpassed 9,000 hospitalized patients with COVID-19 for the first time since summer.

The mayor has been among the state’s most vocal politicians in pleading for vigilance during the pandemic.

TORONTO — Canada’s health minister says health officials will soon complete a review of the coronavirus vaccine made by Pfizer and BioNTech.

Prime Minister Justin Trudeau’s government has been facing criticism since Trudeau admitted last week that other countries with domestic vaccine production are likely to inoculate their citizens first before shipping doses to Canada.