An investigation has been opened into Formula One driver Romain Grosjean's horrifying crash at the Bahrain Grand Prix, governing body FIA said Thursday.

The FIA said it could take up to eight weeks before the conclusions are made public.

The French driver was trapped in a burning car on Sunday when it sliced in half after penetrating a metal crash barrier and then exploded into a fireball. 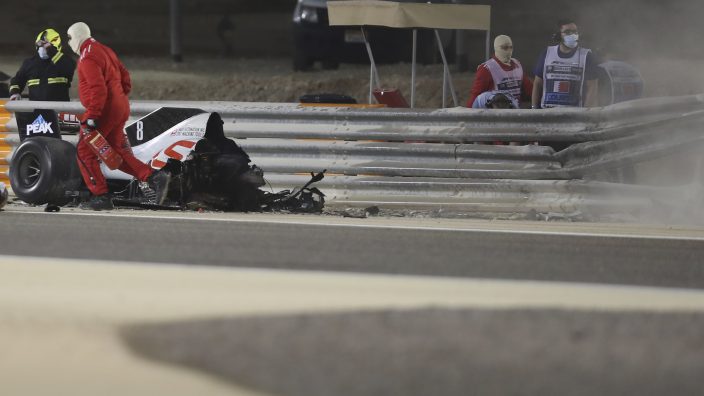 The parts of Haas driver Romain Grosjean's car is seen after he crashed during the Formula One race in Bahrain International Circuit in Sakhir, Bahrain, Saturday, Nov. 28, 2020. (Tolga Bozoglu, Pool via AP)

Grosjean was inside the cockpit of the Haas car for nearly 30 seconds before scrambling out. He suffered only minor burns to the back of his hands and a sprained left ankle. He was discharged from a military hospital in Bahrain on Wednesday.

“The investigation into the Grosjean incident will look at all areas including competitor safety devices such as the helmet, HANS (a head restraint device), safety harness, protective clothing, survival cell, headrest, in-car extinguisher system and the Halo,” the FIA said in a statement. “Analysis will also include chassis integrity and the safety barrier performance."

Grosjean credited the Halo frontal cockpit device, which forms a protective ring in front of the driver's head and can withstand huge impact, for saving his life. A part of Haas driver Romain Grosjean's car is taken after the crash at the start of the Formula One Bahrain Grand Prix in Sakhir, Bahrain, Sunday, Nov. 29, 2020. (Tolga Bozoglu, Pool via AP)

Researchers will also gather data from an onboard high-speed camera facing the driver and filming at 400 frames per second; from a device in the driver’s ear canal measuring head movement during a crash; and use in-car data recording the car's speed and the force of impact.

It was estimated that Grosjean hit the barrier at about 137 mph (222 kph).

“As with all serious accidents, we will analyze every aspect of this crash and collaborate with all parties involved," FIA safety director Adam Baker said. "With so much data available in Formula One, it allows us to accurately determine every element of what occurred." Staff extinguish flames from Haas driver Romain Grosjean of France's car after a crash during the Formula One race in Bahrain International Circuit in Sakhir, Bahrain, Sunday, Nov. 29, 2020. (Brynn Lennon, Pool via AP)

Paris City Hall has instructed the ...

Thailand on Monday discovered a re ...