The number of Americans applying for unemployment benefits fell last week to a still-high 712,000, the latest sign that the U.S. economy and job market remain under stress from the intensified viral outbreak.

Thursday's report from the Labor Department said that initial claims for jobless aid dropped from 787,000 the week before. Before the virus paralyzed the economy in March, the number of people applying for unemployment benefits each week had typically amounted to roughly 225,000. The chronically high pace of applications shows that nearly nine months after the pandemic struck, many employers are still slashing jobs.

The total number of people who are continuing to receive traditional state unemployment benefits declined to 5.5 million from 6.1 million. That figure is down sharply from its peak of nearly 23 million in May. It means that some jobless Americans are finding jobs and no longer receiving aid. But it also indicates that many of the unemployed have used up their state benefits, which typically expire after six months. 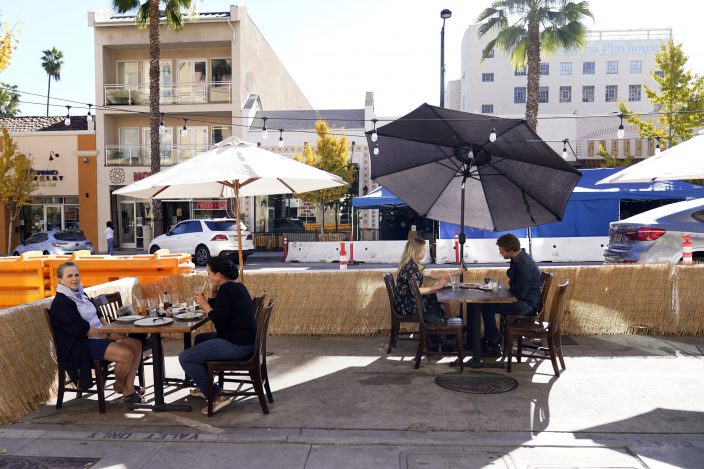 Diners eat lunch outside at Settebello Pizzeria Napoletana on Tuesday, Dec. 1, 2020, in Pasadena, Calif. Pasadena has become an island in the center of the nation's most populous county, where a surge of COVID-19 cases last week led to a three-week end to outdoor dining and California's first stay-home order since the pandemic began to spread across the state in March. The decision by Pasadena health authorities to buck Los Angeles County has been a relief to restaurateurs who have struggled to stay afloat amid closures, ever-changing rules and attempts to keep workers on the job and money in the till. (AP PhotoMarcio Jose Sanchez)

With layoffs still elevated and new confirmed viral cases in the United States now exceeding 160,000 a day on average, the economy’s modest recovery is increasingly in danger. States and cities are issuing mask mandates, limiting the size of gatherings, restricting restaurant dining, closing gyms or reducing the hours and capacity of bars, stores and other businesses.

Most experts say the economy won't be able to sustain a recovery until the virus is brought under control with an effective and widely used vaccine.

Many jobless Americans are now collecting checks under two federal programs that were set up this year to ease the economic pain inflicted by the pandemic. But those programs are set to expire the day after Christmas. When they do, benefits will end completely for an estimated 9.1 million unemployed people.

US unemployment claims slip to still-high 787,000

US jobless claims rise to 885,000 amid resurgence of virus

US jobless claims jump to 853,000 amid resurgence of virus

US jobless claims rise to 778,000 as pandemic worsens

US jobless claims increase to 742,000 as pandemic worsens