Much like a broken record, Brexit trade talks are rumored to be poised for success on the cusp of a deadline, only to face the same old fundamental differences on fishing rights, legal oversight and fair competition that have dogged the European Union and Britain for months.

It was no different on Thursday when EU officials said that the remaining differences couldn't be bridged in “a matter of hours" despite swirling excitement that a decisive breakthrough was imminent.

Irish Foreign Minister Simon Coveney urged EU negotiators holed up with their U.K. counterparts in London on a diet of legal texts and takeout pizza: Let's “hold our nerve," he said. 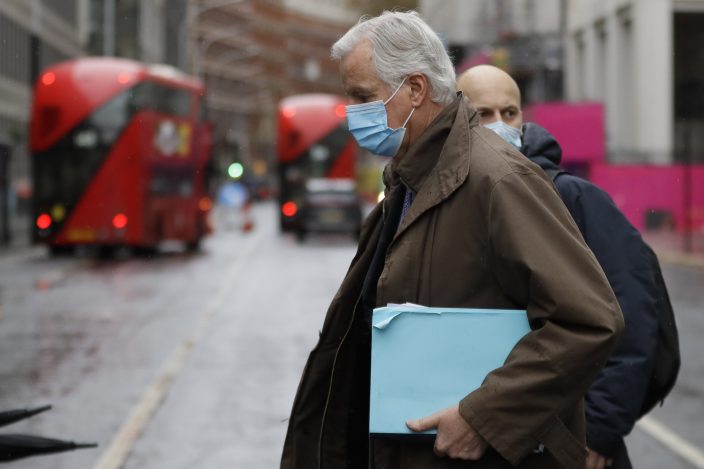 European Union chief Brexit negotiator Michel Barnier, foreground, walks to the Conference Centre in London, Thursday, Dec. 3, 2020. With less than one month to go before the U.K. exits the EU's economic orbit, talks are continuing, and U.K. officials have said this is the last week to strike a deal. (AP PhotoKirsty Wigglesworth)

“If we do that, there’s a good chance that we can get a deal across the line in the next few days,” Coveney said.

In Brussels though, some EU delegations are already thinking about ignoring the super-stringent Jan. 1 deadline that the UK imposed on the talks, and simply negotiate through it for weeks to come if need.

Any fallout of chaos on borders and in trade could simply be blamed on the British, who insisted on a 11-month timeframe since officially leaving the EU on Jan. 31, instead of the half dozen years such talks traditionally take. 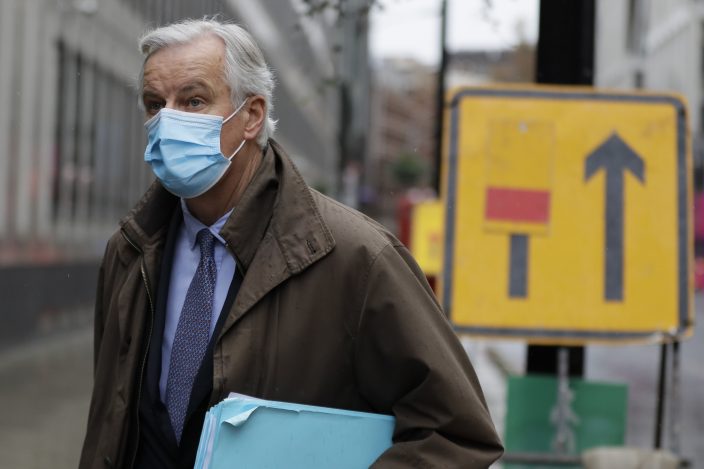 European Union chief Brexit negotiator Michel Barnier walks to the Conference Centre in London, Thursday, Dec. 3, 2020. With less than one month to go before the U.K. exits the EU's economic orbit, talks are continuing, and U.K. officials have said this is the last week to strike a deal. (AP PhotoKirsty Wigglesworth)

“If it doesn't work out for Jan. 1, that doesn't mean that it won't work for Jan. 15, or April 1 or July 1. What it does mean is that it would create a huge mess, but that would be totally blamed on London," a diplomat from an EU nation said on condition of anonymity because the talks were in a critical stage.

Though the U.K. left the EU on Jan. 31, it remains within the bloc’s tariff-free single market and customs union until the end of this year. A trade deal by then would ensure there are no tariffs and quotas on trade in goods between the two sides, but there would still be technical costs, partly associated with customs checks and non-tariff barriers on services.

If a trade deal came later than Jan 1, it would make for two massive adaptations of customs and border rules within a short time. European Commission's Head of Task Force for Relations with the United Kingdom Michel Barnier, centre, walks to the Conference Centre in London, Thursday, Dec. 3, 2020. With less than one month to go before the U.K. exits the EU's economic orbit, talks are continuing, and U.K. officials have said this is the last week to strike a deal. (AP PhotoKirsty Wigglesworth)

Though both sides would suffer economically from a failure to secure a trade deal, most economists think the British economy would take a greater hit, at least in the near-term, as it is relatively more reliant on trade with the EU than vice versa.

EU chief negotiator Michel Barnier has been briefing the EU delegations on Wednesday and Thursday on any progress in an attempt to assuage itchy member states with most at stake that he will remain within their mandate.

“We are close, very close, maybe even on the red lines we set in some instances but we have not crossed it," the high-level diplomat said. He indicated any compromise would now need to come from London.

With less than four weeks to go before the possibility of tariffs being imposed on an array of products, businesses in the U.K. are showing their frustration at the ongoing uncertainty.

“We have been doing everything in our power to make sure that we are well placed to continue trading, to continue to supply our customers regardless of whether there is or isn’t a no-deal Brexit,” he said.

On Wednesday, British Prime Minister Boris Johnson said he is “absolutely committed” to trying to secure a deal “if we can.” The discussions for months have failed to make much headway on three key issues. These relate to fishing rights in British waters, business regulations and state aid.

The bloc has accused Britain of wanting to retain access to the EU’s lucrative markets, much like any EU country, without agreeing to follow its rules. The EU fears Britain will slash social and environmental standards and pump state money into U.K. industries, becoming a low-regulation economic rival on the bloc’s doorstep.

Britain says the EU is making unreasonable demands and is failing to treat it as an independent, sovereign state.

There is speculation that the U.K. has reduced its demands for control of fishing rights within its waters, by asking EU fishing fleets to hand over up to 60% of the value of stocks currently caught rather than the 80% previously sought. But this falls short of EU demands in one of the most symbolically important aspects of the negotiations.