South Carolina and Kentucky each aim to end disappointing regular seasons with a rare victory.

The winner might even have a chance to continue playing football in December.

While the possibility of postseason play initially appears farfetched given both teams’ losing records, the Southeastern Conference’s bowl alliances means slots still have to be filled even in this unusual season. The first step toward that scenario comes Saturday night in Lexington, Kentucky, as the visiting Gamecocks (2-7, 2-7 Southeastern Conference) and Wildcats (3-6, 3-6) both will try to end losing streaks. 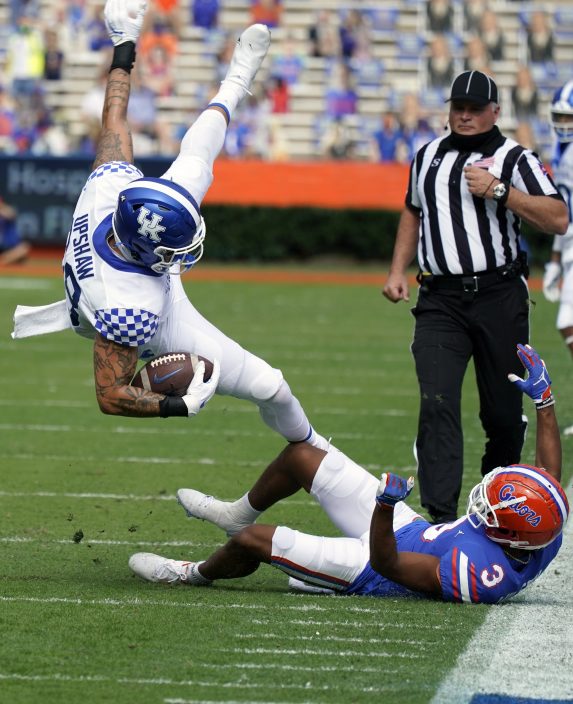 Kentucky tight end Keaton Upshaw, left, is upended by Florida defensive back Marco Wilson (3) after a reception during the first half of an NCAA college football game, Saturday, Nov. 28, 2020, in Gainesville, Fla. (AP PhotoJohn Raoux)

“It’s a big chance to get rid of that nasty feeling off of losing these couple of games,” said Kentucky senior receiver Josh Ali, referring to consecutive losses to top-ranked Alabama and No. 6 Florida.

“We may not have a bowl game. This may be our last one, so mentally you should want to go out there and play your hardest.”

The Wildcats are coming off a two-game gauntlet in which the SEC division leaders outscored them by a 97-13 margin, including last week’s 34-10 rout at Florida. Kentucky played both contests short-handed with players and staff sidelined by coronavirus issues.

Kentucky expects to have more players available this weekend against a Gamecocks squad seeking to give interim coach Mike Bobo his first victory since taking over after Will Muschamp’s firing on Nov. 15.

South Carolina has lost five in a row since upsetting then-No. 15 Auburn and is coming off a 45-16 home loss to No. 13 Georgia. The Gamecocks head to Lexington seeking a second consecutive series win after snapping a five-game losing streak to Kentucky last year in Columbia.

The Gamecocks believe if they meet that primary goal, the postseason may take care of itself.

“Yeah, I definitely think that’s something that’s out there for us and we’d welcome any opportunity to play,” said freshman quarterback Luke Doty, who will make his second consecutive start.

“But right now, we’re focused on Kentucky and getting the job done.”

Some other things to watch as Kentucky and South Carolina complete their regular seasons:

South Carolina tailback Kevin Harris leads the SEC with 928 yards as he tries to become its first 1,000-yard runner since Mike Davis in 2013. Gamecocks coach Mike Bobo said the offense is anxious to get the sophomore the milestone and believes it’s a more robust achievement since it comes against 10 SEC defenses. “It’s something this offense can build on in the future,” Bobo said.

Quarterback Terry Wilson is among 18 Kentucky seniors who will be honored in their presumed home finales. He led the Wildcats to 10 wins including the Citrus Bowl in 2018 before missing most of last season with a knee injury. Wilson has compiled 1,258 yards of total offense and 11 combined touchdowns this season and needs 45 yards rushing to reach 1,000 career.

Asked about Wilson’s legacy, coach Mark Stoops said, “I think it should be that he did everything he could for this program.”

Kentucky has started most games well this season and is even with opponents through two quarters at 102 points. The second half and overtime have been different stories, with the Wildcats outscored 144-74. Though non-factors in their two recent losses, their play has been worse after halftime and the focus has been on 60 minutes of effort.

“It just hasn’t been put together all the time and that’s what we need to do,” offensive coordinator Eddie Gran said. “Put two halves together, just be consistent.”

Sophomore cornerback and SEC interceptions leader Kelvin Joseph became Kentucky’s first player to opt out this week, leaving the conference’s No. 2 pass defense without its breakout star. Joseph’s four pickoffs, including one returned for a touchdown, rank fourth nationally. Freshman Carrington Valentine is listed as the backup.

Doty is anxious about playing Kentucky, as much to try and end the Gamecocks’ losing streak as to play in the snow. Forecasts for Saturday night in Lexington call for rain and snow showers. Doty, from Myrtle Beach, S.C., can’t remember ever playing amid snow. “I don’t think I’ve seen actual snow at all,” he joked.