No. 8 BYU will play at No. 14 Coastal Carolina on Saturday after the Chanticleers’ original opponent, No. 25 Liberty, was hit with COVID-19 issues.

Liberty said Thursday it has paused all team activities and will not play another regular-season game, but does intend to prepare for a bowl game.

The Cougars (9-0) have been looking to add another game to improve their case for a major bowl bid. Meanwhile, the Chanticleers (9-0) have ESPN’s “College GameDay” coming to Conway, South Carolina. 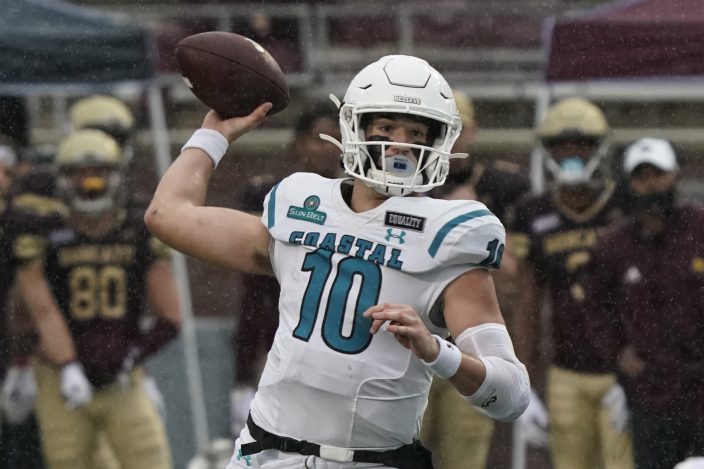 BYU at Coastal Carolina will start at 5:30 p.m. EST and air on ESPNU.

“It's good to have a partner like ESPN that can help put together such a meaningful game at this point in the season," BYU athletic director Tom Holmoe said in a statement.

Discussions between BYU and Coastal Carolina began earlier in the week when it became apparent that Liberty might not be able to play because of COVID-19 cases on the team.

The Chanticleers have already earned a spot in the Sun Belt championship game, which will be played Dec. 19, but could still be in play to earn a spot in the major bowl game as College Football Playoff selection committee's highest-ranked Group of Five conference champion.

Coastal Carolina also has one more conference game on Dec. 12 at Troy.

Independent BYU is not eligible for that spot and is ranked No. 13 by the committee. The Cougars will likely need to move up at least a spot or two to have a chance for a New Year's six bowl bid and the $4 million payday that comes with it.

The Cougars have one more game scheduled at San Diego State on Dec. 12.