After weathering criticism for certifying President Donald Trump's narrow election loss to Democrat Joe Biden, Republican officials in Georgia are proposing additional requirements for the state's vote-by-mail process, despite no evidence of systemic fraud or irregularities.

Republicans are zeroing in on a plan to require a photo ID for ballots cast by mail. Voting rights activists and Democrats argue that the change isn't necessary and would disenfranchise voters.

Biden beat President Donald Trump by just over 12,500 votes in Georgia, with Biden receiving nearly twice as many of the record number of absentee ballots as the Republican president, according to the secretary of state's office. A recount requested by Trump was wrapping up and wasn't expected to change the overall outcome. 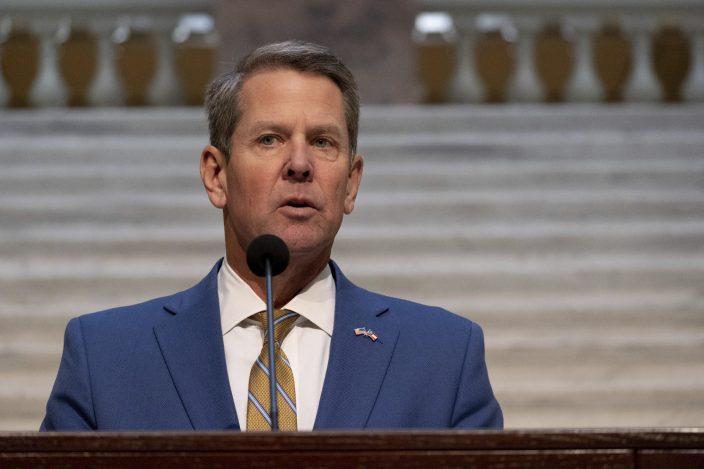 Trump, who for months has sowed unsubstantiated doubt about the integrity of mail-in votes, has also made baseless claims of widespread fraud in the presidential race in Georgia.

Secretary of State Brad Raffensperger and his staff have vehemently rebuffed those claims, stating unequivocally that there is no evidence of systemic errors or fraud in last month's election. Yet Raffensperger and Gov. Brian Kemp, both Republicans who have been publicly lambasted by Trump, have joined the push to require a photo ID for absentee voting.

“Voters casting their ballots in person must show a photo ID, and we should consider applying that same standard to mail-in balloting,” Kemp said in remarks streamed live online. 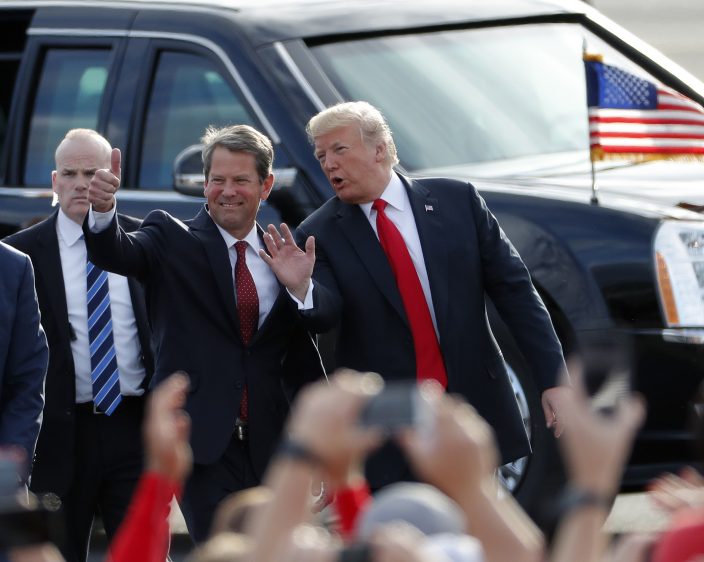 FILE - In this Nov. 4, 2018, file photo, then-Georgia Republican gubernatorial candidate Brian Kemp, left, walks with President Donald Trump as Trump arrives for a rally in Macon , Ga. President Trump said Sunday, Nov. 29, 2020 he was “ashamed” for endorsing the Republican governor of Georgia after he lost in the state to Democrat Joe Biden. Trump said on Fox News that Gov. Brian Kemp has “done absolutely nothing” to question the state’s results.. (AP PhotoJohn Bazemore, File)

Raffensperger also has suggested allowing state officials to intervene in counties that have systemic problems with administering elections and broadening the ways in which challenges can be posed to votes cast by residents who don’t live where they say.

The photo ID idea has support among several members of the state legislature, including Republican Senate Majority Leader Mike Dugan. “I don't think there should be different standards for the same process,” Dugan said in an interview.

Republican House Speaker David Ralston has been skeptical of voting by mail, telling a local news outlet in April that increased mail voting “will be extremely devastating to Republicans and conservatives in Georgia.” Political analysts have said that typically more Democrats than Republicans use mail-in ballots.

Ralston later said he was not talking about his party losing an advantage but the potential for fraud. “We must do everything in our power to ensure votes are not stolen, cast fraudulently or plagued by administrative errors,” he said in a statement this week.

Deputy Secretary of State Jordan Fuchs said in an interview with The Associated Press that currently anyone who knows someone’s name, address and date of birth can request an absentee ballot on that person’s behalf. She said that while signature matches provide some security for mail-in ballots, the process should be shored up.

One way to do that could be to require a person's driver's license number or a photocopy of a separate form of ID, she said.

While Republicans seem ready to press forward with the photo ID requirement during the upcoming legislative session, Democrats and civil rights organizations are raising alarms.

With no evidence of widespread fraud or other problems in the election, it doesn’t make sense to talk about measures that could ultimately prove to be barriers to voting, said Andrea Young, executive director of the American Civil Liberties Union of Georgia.

“What is the problem that you’re trying to solve?" she asked. “The rule should be first, ‘Do no harm’ when it comes to democracy, and whenever there are more restrictions being put on a process, you run the risk of disenfranchising Georgia citizens.”

Young says adding a photo ID requirement for absentee voting would be harmful because “we know that these barriers have a different impact on African American voters, on younger voters and, in this instance, on seniors who have certainly earned the right” to vote.

“What this says to me is that they just don’t want people voting," Jordan said. “And they specifically don’t want Democrats voting, or people that don’t support their chosen candidates voting, and they’re going to try to make it as hard as possible."

Democrats and voting rights groups have for years sought to decrease rejections of absentee ballots in Georgia, arguing that minorities have been disproportionately affected. Absentee ballots are sometimes rejected because signatures on the outer envelope are deemed not to match signatures in the voter registration system, or because the envelope is not signed at all.

An agreement signed in March to settle a lawsuit filed by the Democratic Party spells out a standard process that must be used statewide to judge the signatures. That agreement has been the subject of much of Trump's online ire, and he has incorrectly said it “makes it impossible to check & match signatures on ballots and envelopes.”