Mexico’s president said Thursday he plans to give the military a role in distributing coronavirus vaccines, which he says U.S. President Donald Trump helped him get.

President Andrés Manuel López Obrador said that on his visit to Washington in July he spoke with Trump and Vice President Mike Pence and they “helped facilitate so that Mexico was taken into account and could get the vaccine.”

López Obrador suggested Mexico will probably wait until U.S. regulators approve the Pfizer vaccine later this month before giving it the go-ahead in Mexico. 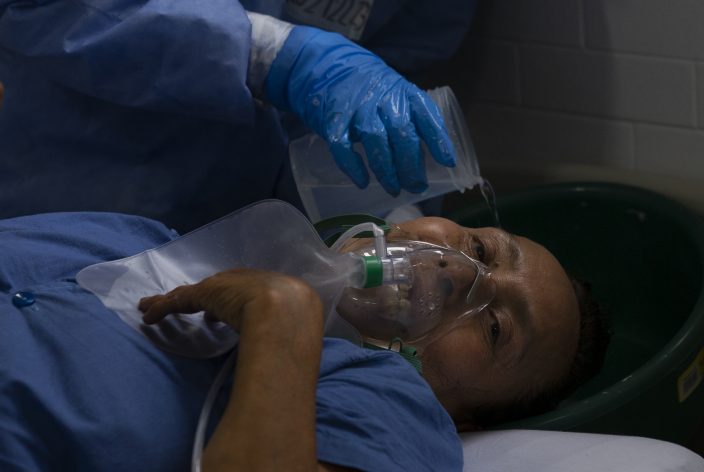 Dressed in protective gear to curb the spread of the new coronavirus, a medical worker washes a patient's hair, at a military hospital set up to take care of COVID-19 patients in Mexico City, Monday, November 30, 2020. As of last Friday, Mexico reported a record daily increase in the number of coronavirus cases, with Mexico City reporting the biggest portion of the surge in cases. (AP PhotoMarco Ugarte)

On Wednesday, Mexico’s Health Department signed a contract for 34.4 million doses of that vaccine, and said it hoped to receive 250,000 doses in December. Each person requires two doses.

The president said the government is discussing with “the army and the navy, and we are defining the whole operation” to distribute the vaccine. López Obrador has given the military an unprecedented array of responsibilities in his two years in office, including distributing medical supplies and guarding hospitals.

López Obrador is one of the few world leaders who has yet to congratulate President-elect Joe Biden.

Mexico has suffered the world's fourth-highest death toll, with over 107,500 test-confirmed deaths. However, the country does very little testing and officials estimate the real death toll is probably closer to 150,000.

Even before the pandemic, “The Lit ...

Mexico lets governors obtain vaccines for their own states

Mexico says it's OK with getting less Pfizer vaccine for now