Days after the discovery and swift disappearance of two shining metal monoliths spotted half a world away from each other, another towering structure has popped up, this time at the pinnacle of a trail in Southern California.

Its straight sides and height appear similar to one discovered in the Utah desert and another that was found in Romania. Like those structures, the origins of the California edifice are also mysterious.

It's at the top of a hill in Atascadero, about halfway between San Francisco and Los Angeles, KEYT-TV reported Wednesday. The tall, silver structure drew hikers to the area after photos were posted on social media.

A metal structure sticks from the ground on the Batca Doamnei hill, outside Piatra Neamt, northern Romania, on Nov. 27, 2020. The structure, similar in shape and size to the monolith that was placed in the Utah desert, has since disappeared.(Robert Iosubziarpiatraneamt.ro via AP)

A similar one spotted about two weeks ago in Utah's otherworldly red-rock country became a beacon of fascination around the world as it evoked the movie “2001: A Space Odyssey,” and drew hundreds of people to the remote spot.

Two extreme-sports athletes said this week they were part of a group that tore down the hollow metal structure because they were worried about the damage the droves of visitors were causing to the relatively untouched spot. Officials said the visitors flattened plants with their cars and left behind human waste.

A similar structure that appeared last week in Romania has also disappeared. 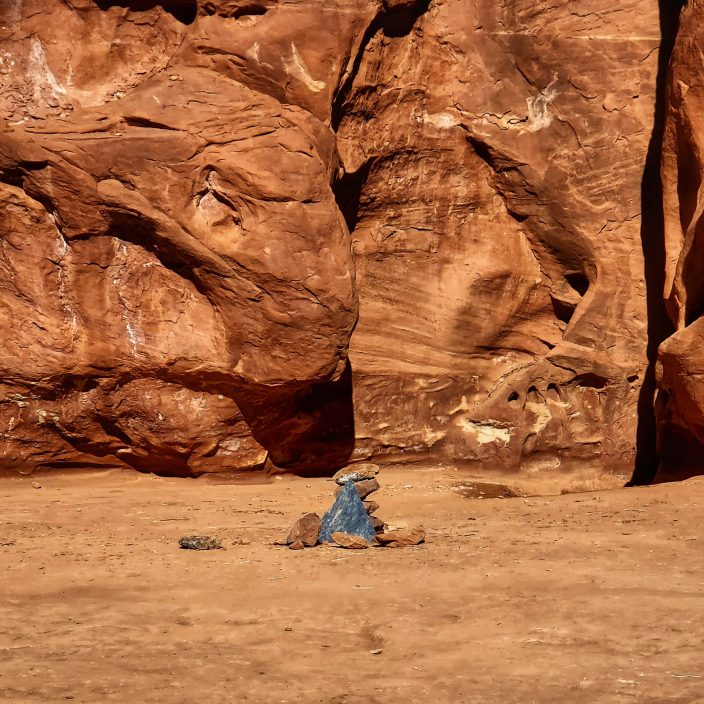 In this Saturday, Nov. 28, 2020, photo provided by Kelsea Dockham, rocks mark the location where a metal monolith once stood in the ground in a remote area of red rock in Spanish Valley, Utah south of Moab near Canyonlands National Park. The mysterious silver monolith that was placed there has disappeared less than 10 days after it was spotted by wildlife biologists performing a helicopter survey of bighorn sheep, federal officials and witnesses said. (Kelsea DockhamCanyon State Overland via AP)

The Utah creation evoked famous land-art pieces that dot the American West, including two well known works elsewhere in the state. Robert Smithson’s Spiral Jetty is an earthwork along the Great Salt Lake and Nancy Holt's Sun Tunnels are huge concrete pieces in the west desert.

Like those pieces, the monolith was fascinating in part because of its context in the landscape, said Whitney Tassie, a curator of modern and contemporary art at the Utah Museum of Fine Art.

“That’s a big, big part of land art in general is this idea of an experience, of a journey,” she said.

The place where a metal monolith was placed on the Batca Doamnei hill, outside Piatra Neamt, northern Romania, on Dec. 1, 2020. The structure, similar in shape and size to the monolith that was placed in the Utah desert, spotted on Nov, 26 has since disappeared.(Robert Iosubziarpiatraneamt.ro via AP)

The intense social media reaction to the monolith against the backdrop of a punishing pandemic, along with the quick destruction of the piece, has become a part of its story, she said. Police have said the dismantling may not be illegal since no one has claimed the structure as their property.

The still-anonymous creator of the Utah monument, meanwhile, did not follow the steps taken by land artists of the 1970s to secure permission to make their works. Visitation to those remote sites is now managed and overseen to avoid too much stress on the environment. Federal and state officials in Utah had also expressed concern about the area around the monolith being overrun.

“It’s good to think about our relationship with the earth, which is ultimately what these sorts of projects do,” Tassie said. “Man's impact on the environment front and center."

Conor McGregor has been sued in Ir ...

Japan is publicly adamant that it ...