Steven Cohen already is on track for a higher owner WAR than the Wilpons, his purchase the reason Trevor May decided to take a $15.5 million, two-year contract with the New York Mets.

“Just kind of the buzz around Steve and the purchase of the team and the excitement of all the changes happening, my immediate reaction was wanting to be a part of something like that,” May said Thursday, a day after finalizing his free-agent deal.

Cohen completed his $2.42 billion purchase, a record baseball price, on Nov. 6 and brought back Sandy Alderson to run the team. Alderson fired general manager Brodie Van Wagenen as Cohen spent time engaging fans on social media, soliciting ideas to turn around a team that won its only World Series titles in 1969 and 1986. 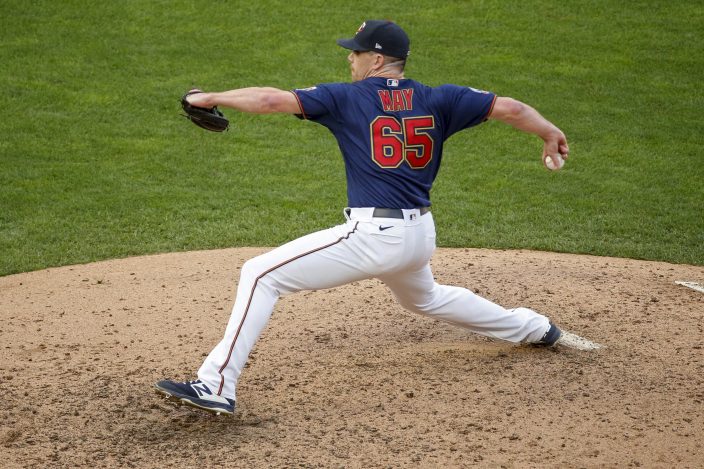 FILE - In this Sept. 4, 2020, file photo, Minnesota Twins relief pitcher Trevor May throws to a Detroit Tigers batter during the second game of a baseball doubleheader in Minneapolis. The New York Mets reached their first agreement with a free agent since Steven Cohen bought the team, a deal with 31-year-old May, a person familiar with the negotiations tells The Associated Press. The person spoke on condition of anonymity Tuesday, Dec. 1, because the agreement is subject to a successful physical. (AP PhotoBruce Kluckhohn, File)

“There was a connection immediately,” May said. “I saw a lot of the stuff on socials with how he’s been a fan for 50 years now or plus and it’s something that it’s hard to describe. It’s something that that is just kind of new, it’s kind of unprecedented in Major League Baseball. It’s really just something that’s exciting and you want to match your owner’s excitement."

May also was attracted by the chance to work with Jeremy Hefner, a retired 34-year-old right-hander who pitched for the Mets in 2012-13, scouted for the Twins in 2017-18, served as their assistant pitching coach the following year and returned to the Mets as pitching coach last season under new manager Luis Rojas.

May had Tommy John surgery on March 22, 2017, and bonded with Hefner, who twice had the reconstruction operation. Hefner helped persuade May to give up his curveball after the Mets’ Dominic Smith hit a three-run, pinch homer on an 0-2 curve at Target Field on July 17, 2019. Smith. He’s stuck to a fastball, slider and changeup since,

“It’s just weird and ironic that it was against the Mets,” May said. “That was like the third time in a matter of a week where the curveball, just for whatever reason, didn’t get to where I wanted to go, was kind of morphing into this new slider that I tried.”

“His big thing was just being hyper-consistent mentally, because that’s something that you have control over,” May said. “I had never forget the one time I was late for a bullpen coming back from a from an injury, and I’ve never been chewed out like that in my life.”

A native of Longview, Washington, selected by Philadelphia out of high school on the fourth round of the 2008 amateur draft, May was dealt to the Phillies while still a minor leaguer in December 2012. He always wanted to pitch in New York.

“I loved every moment I was in Minnesota, but it is a smaller market. There’s just only so much you can really do and achieve to kind of like think outside the box,” he said. “You like to collaborate with people and do cool stuff and get people excited about your team, I mean there’s just no better place than New York.”

He’s a bit of a character, going by the names DJ Hey Beef and DJ Mazr when spinning record. May is a Twitch gamer and engages fans on social media.

“I think I feed off that energy,” he said. “Kind of provides a little more accountability.”

May has become used to people “hating or just generally trolling or just trying to get a rise out of you." With the switch to New York, “any sort of negative thing I’ve seen on on social media over the years, I should probably just immediately, like times five it in my head.”

May lives in Kelso, Washington, with wife Kate and cats Elsie and Donnie. He had a large cutout of Elsie behind him, which was at Target Field in the absence of fans last season. He said Elsie won’t sleep unless the cutout is visible near her bed.

“We had our family section, so I had my wife and my cat up there,” May said. “It’s a really weird situation I created, but now I can’t move it. So it’s going to be there forever."

He recalled being in New York for his physical a day earlier and having his driver stop Benateri’s Italian Gourmet Deli in College Point, near Citi Field. He got a sandwich called the Michelangelo, with a chicken cutlet, fresh mozzarella, bacon, avocado, and Cajun chipotle mayonnaise.

“It was incredible. I saw it actually on the Instagram on the way there,” he said. “I’m going to throw pickles on it the next time. I think that that’s the one thing that’s missing for me. Doesn’t naturally go on the sandwich. But I think that I’ll get some some brownie points for like customizing it and making it mine.”

Van Wagenen back to representing players, with Roc Nati ...