The Pakistan cricket team has been denied the right to train while in managed isolation in New Zealand after eight members of the touring squad tested positive for COVID-19.

Under exemptions granted to visiting sports teams, members of the 53-strong Pakistan team could have been allowed to leave their Christchurch hotel to train in small groups after the third day of their 14-day isolation period.

But the positive tests and a breach of isolation protocols by team members on their first day in isolation has led New Zealand authorities to withhold the training exemption. 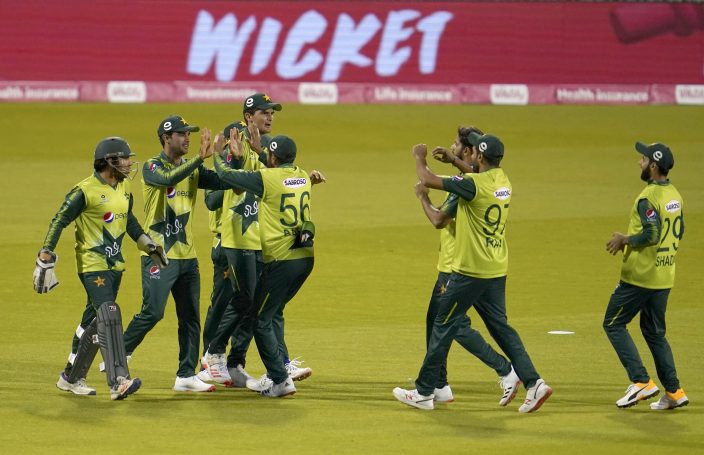 FILE - In this Tuesday Sept. 1, 2020, file photo, Pakistan players celebrate the dismissal of England's Dawid Malan during the third Twenty20 cricket match between England and Pakistan, at Old Trafford in Manchester, England. Six members of the Pakistan cricket squad in New Zealand have tested positive, Thursday Nov. 26, 2020, for COVID-19 and have been moved from managed isolation into quarantine. (AP PhotoJon Super, Pool,File)

Dr. Ashley Bloomfield, New Zealand’s director-general of health, confirmed Friday the exemption would not be granted.

“I have very carefully considered this situation,” Bloomfield said. “At this time, I continue to have ongoing concerns about the risk of cross-infection within the squad. There have been a number of active cases identified among the team. Public health considerations will continue to be foremost in our response to COVID-19, whether this involves individuals or teams.

“We appreciate the challenges that this decision will have for the touring team.”

The decision is a major setback for the Pakistan team which will begin a three-match Twenty20 series against New Zealand on Dec. 18 and a two-match test series on Dec. 26.

The team was issued a “final warning” after the breaches of isolation protocol occurred shortly after the team’s arrival in New Zealand last week. Close circuit television coverage from their hotel showed players breaking rules by mingling in corridors and sharing food.

Further breaches might have led to the team being expelled from New Zealand.

Players and officials are expected to remain in their own rooms for the first three days of the isolation period until the training exemption might come into force.

Squad members have been tested on the first, third day and sixth days of their stay in isolation.

All members tested negative on four occasions before the team left from Lahore to New Zealand but six members were positive on arrival. Two more have since returned positive tests and all eight are now in quarantine.