Relief may be on the way in the form of mass-produced vaccines, but COVID-19 continues to ravage communities around the world with the global death toll reaching some 1.5 million, leaving the living to mourn them and carry on.

At a Spanish mortuary, three red roses and a wooden cross graced the plain coffin of a person killed by the coronavirus before it was taken for cremation.

On the outskirts of the Iranian capital, Tehran, masked mourners prayed over the body of another victim as they stood beneath the swooping arches of a cemetery that’s struggling to keep up with the pandemic. 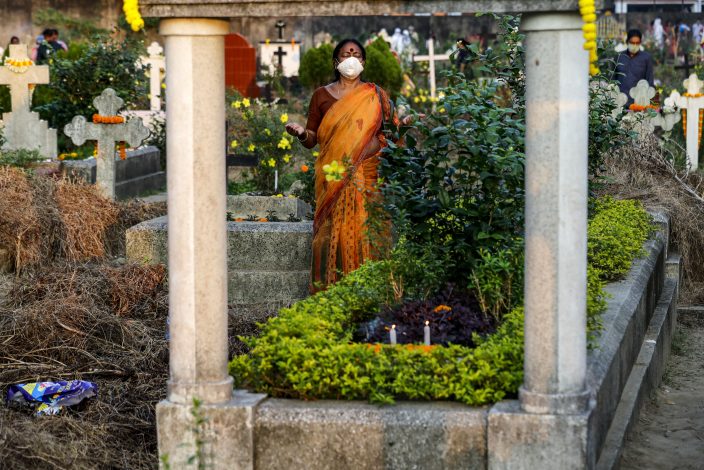 An Indian Christian woman wearing a face mask as a precaution against the coronavirus prays beside the grave of a deceased relative during All Souls Day in Kolkata, India, Monday, Nov. 2, 2020. (AP PhotoBikas Das)

And in Montenegro, the body of Bishop Amfilohije of the Serbian Orthodox Church lay in an open-casket mass funeral in the capital's ornate main temple after he contracted the virus and died.

Even as the dead are honored, the celebration of rites, rituals and traditions often emphasizes protecting the living through social distancing.

In Sedro-Wooley, Washington, the Garcia sisters eschewed their usual Thanksgiving feast attended by dozens, instead delivering food to relatives spread along 30 miles of the North Cascades Highway for them to dine separately in their own homes while joining a group phone call. 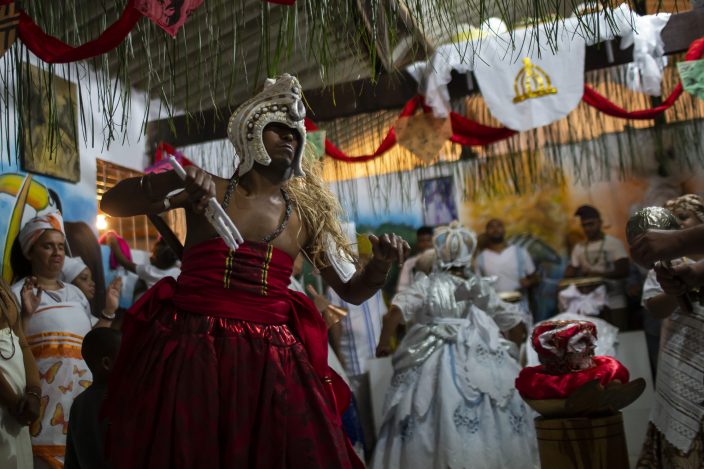 A man in trance dances during a Candomble religious ceremony at the Ile Ase Yoba temple in Seropédica, Rio de Janeiro state, Brazil, Sunday, Oct. 31, 2020. As Portuguese colonists brought African slaves to Brazil, the enslaved men and women developed blends of their traditional religions with Catholicism, which today include Candomble, Umbanda and Omoloko, and are practiced by a tiny minority. (AP PhotoBruna Prado)

From religious services in honor of St. Andrew in the Romanian village of Ion Corvin; to an Indian woman who prayed over a grave on All Souls' Day in Kolkata; to Ethiopian Orthodox Christians who lit candles to ask for peace; many wore face coverings to try to prevent the virus’ spread.

Masks were also the rule at an interfaith gathering near New York’s Washington Square Park, as Buddhists, Jews, Muslims and Christians sang and prayed in a show of post-election solidarity; they were less common at protests by supporters of President Donald Trump, such as one outside the Michigan State Capitol where a woman held a large crucifix aloft while praying with fellow demonstrators.

These and more are among the AP’s top faith-related images from November. 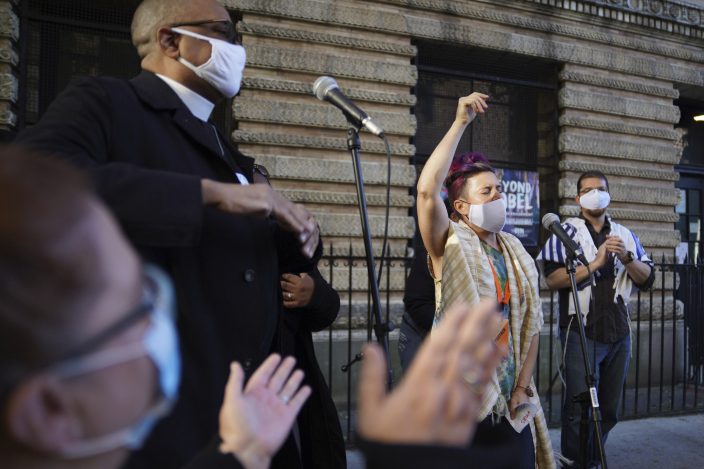 Shira Kline, a director of worship for LabShul, a Jewish community-based organization, leads a group in song during an interfaith gathering outside of the Judson Memorial Church near Washington Square Park in New York, Wednesday, Nov. 4, 2020. Muslims, Jews, Christians and Buddhists came together to show solidarity among faith communities as the country awaits the final result of the U.S. presidential election. (AP PhotoEmily Leshner) 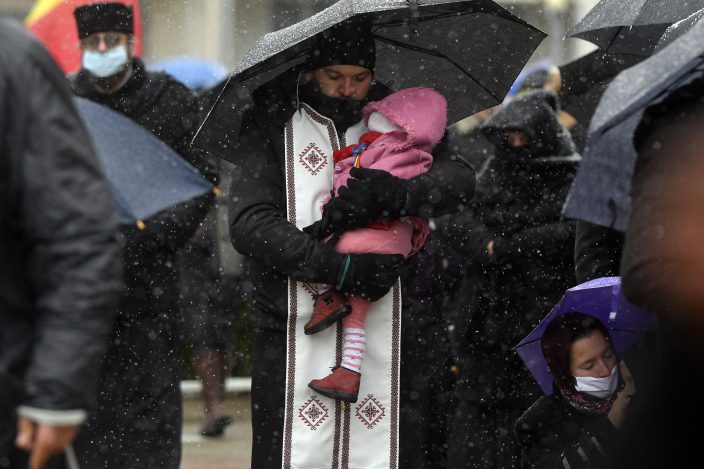 A priest holds a baby during a religious service celebrating St. Andrew in the village of Ion Corvin, eastern Romania, Monday, Nov. 30, 2020. Braving wintry weather and the new coronavirus fears, several hundred Orthodox Christian believers gathered outside a cave in eastern Romania where St. Andrew is said to have lived and preached in the 1st century. (AP PhotoAndreea Alexandru) 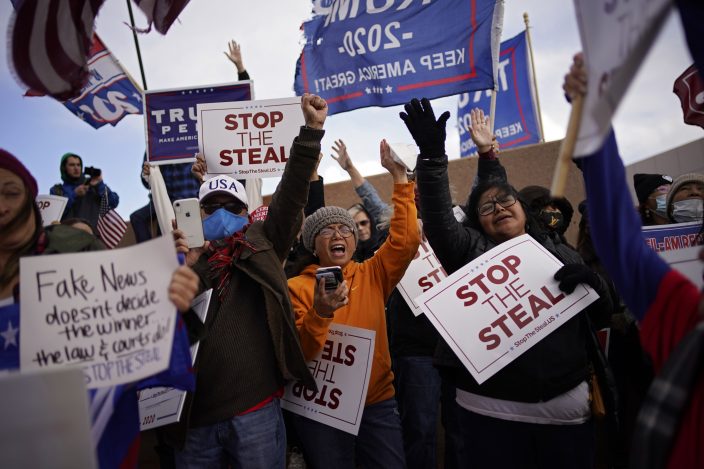 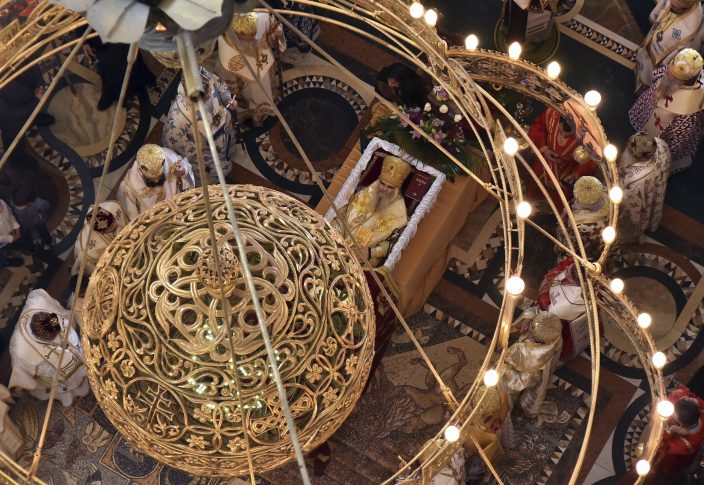 An open casket with Bishop Amfilohije's body during the liturgy and funeral in the main temple in the capital Podgorica, Montenegro, Sunday, Nov. 1, 2020. Bishop Amfilohije died on Friday after contracting the coronavirus weeks ago. A mass funeral on Sunday was held for the popular head of the Serbian Orthodox Church in Montenegro in violation of restrictions that are in place against the new coronavirus. (AP PhotoRisto Bozovic) 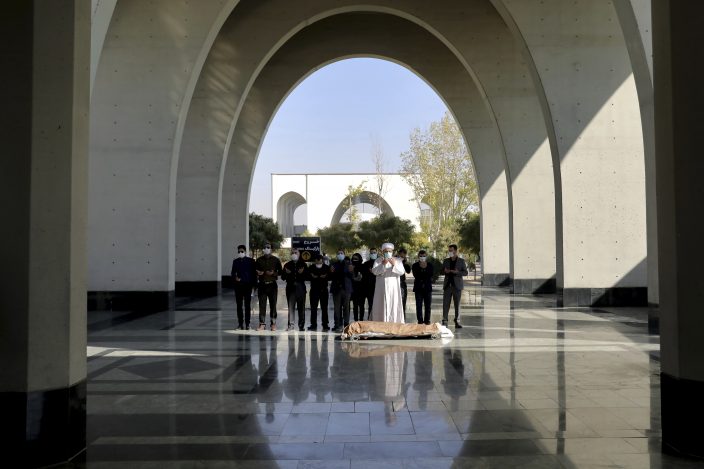 Mourners pray over the body of a person who died from COVID-19, at the Behesht-e-Zahra cemetery on the outskirts of the Iranian capital, Tehran, Iran, Sunday, Nov. 1, 2020. The cemetery is struggling to keep up with the coronavirus pandemic ravaging Iran, with double the usual number of bodies arriving each day and grave diggers excavating thousands of new plots. (AP PhotoEbrahim Noroozi) 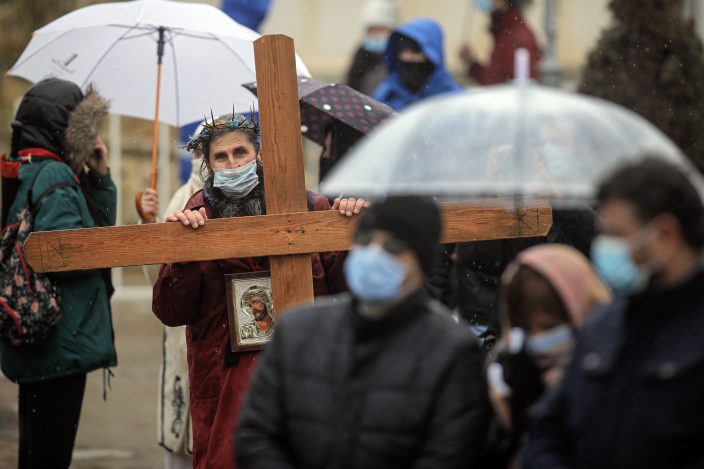 A man wearing a thorn crown and a mask for protection against COVID-19, holds a wooden cross while attending a religious service celebrating St. Andrew in the village of Ion Corvin, eastern Romania, Monday, Nov. 30, 2020. Braving wintry weather and the new coronavirus fears, several hundred Orthodox Christian believers gathered outside a cave in eastern Romania where St. Andrew is said to have lived and preached in the 1st century. (AP PhotoVadim Ghirda) 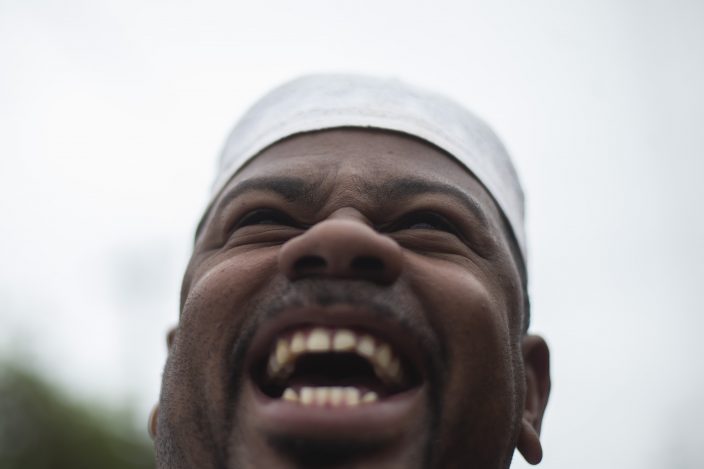 Wagner Luiz Abreu Machado, a priest from the Afro-Brazilian faith Umbanda who goes by Waguinho Macumba, campaigns for a seat on the Sao Goncalo City Council with the Brazilian Social Democracy Party (PSDB) in Sao Goncalo, Rio de Janeiro state, Brazil, Sunday, Nov. 8, 2020. "Running for office is hard enough, but representing the banner of Afro-Brazilian religions is even harder because the banner is replete with prejudices and discrimination," said Machado. (AP PhotoBruna Prado) 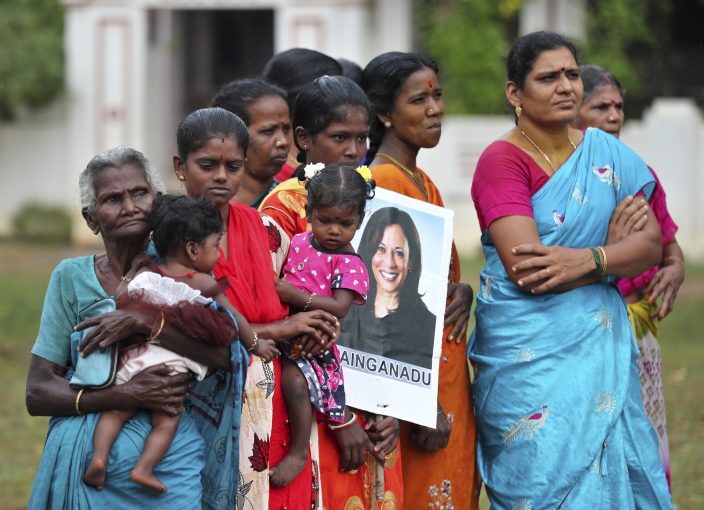 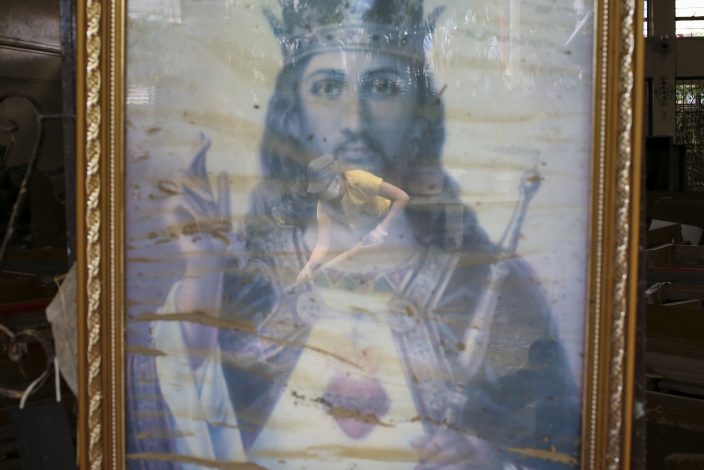 Church worker Mary Queen Ga-an is reflected on the muddied picture of Jesus Christ as she cleans up mud brought about by Typhoon Vamco at the Immaculate Concepcion Chapel in the Industrial Valley Complex in Marikina, Philippines on Monday, Nov. 16, 2020. Typhoon Vamco left dozens of people dead as it swelled rivers and flooded low-lying areas while it passed over the capital and storm-battered northeast Philippines, where rescuers were deployed last week to help people flee the rising waters. (AP PhotoAaron Favila) 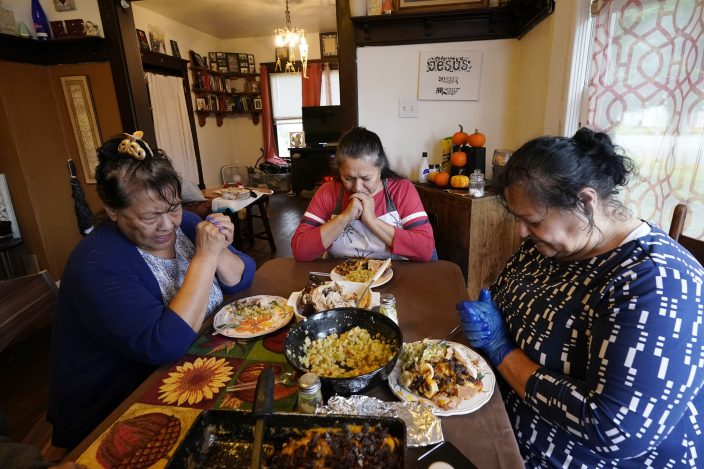 Francis Garcia, left, leads her sisters Anna Garcia, center, and Olga Garcia in prayer at an afternoon family meal Wednesday, Nov. 4, 2020, in the family home in Sedro-Woolley, Wash. On any other Thanksgiving, dozens of Olga's family members would squeeze into her home for the holiday. But this year, she'll deliver food to family spread along 30 miles of the North Cascades Highway in Washington state. If the plan works, everyone will sit down to eat in their own homes at precisely 6:30 p.m. and join a group phone call. (AP PhotoElaine Thompson) 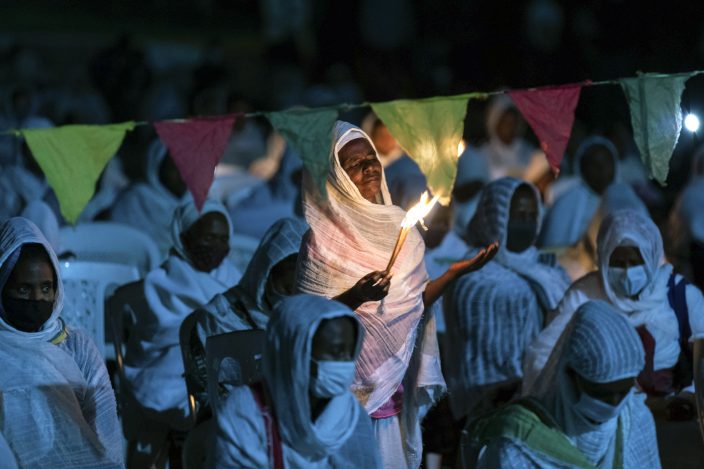 Ethiopian Orthodox Christians light candles and pray for peace during a church service at the Medhane Alem Cathedral in the Bole Medhanealem area of the capital Addis Ababa, Ethiopia Thursday, Nov. 5, 2020. Ethiopia's powerful Tigray region asserts that fighter jets have bombed locations around its capital, Mekele, aiming to force the region "into submission," while Ethiopia's army says it has been forced into an "unexpected and aimless war." (AP PhotoMulugeta Ayene) 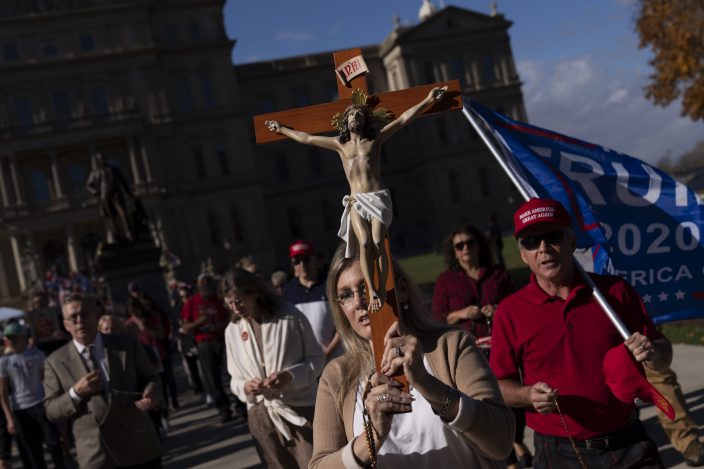 Worshippers pray during a protest with Trump supporters demonstrating against the presidential election results at the State Capitol in Lansing, Mich., Sunday, Nov. 8, 2020. (AP PhotoDavid Goldman) 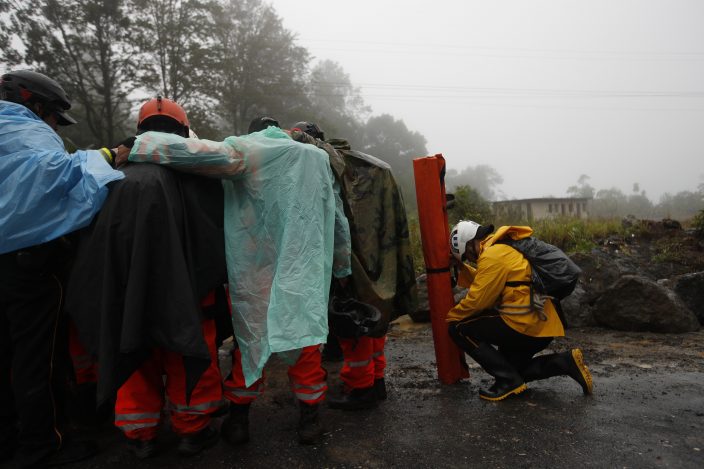 Volunteer firefighters huddle in prayer before beginning a search and rescue operation in San Cristobal Verapaz, Saturday, Nov. 7, 2020, in the aftermath of Hurricane Eta. Searchers in Guatemala were digging through mud and debris looking for an estimated 100 people believed buried by a massive, rain-fueled landslide, as Eta regained tropical storm strength and churned toward Cuba. (AP PhotoMoises Castillo) 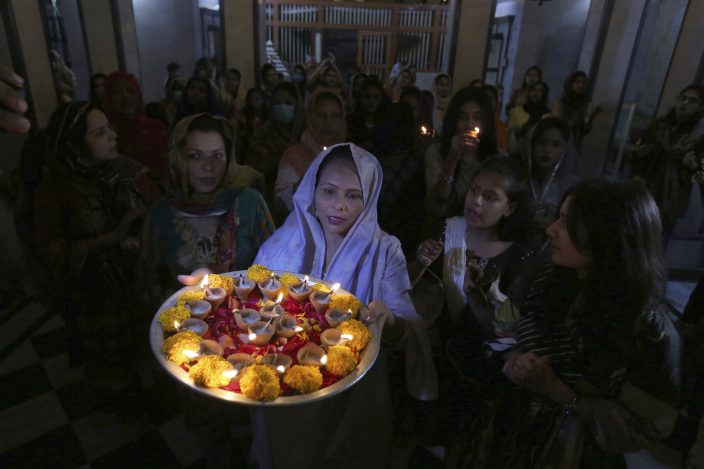 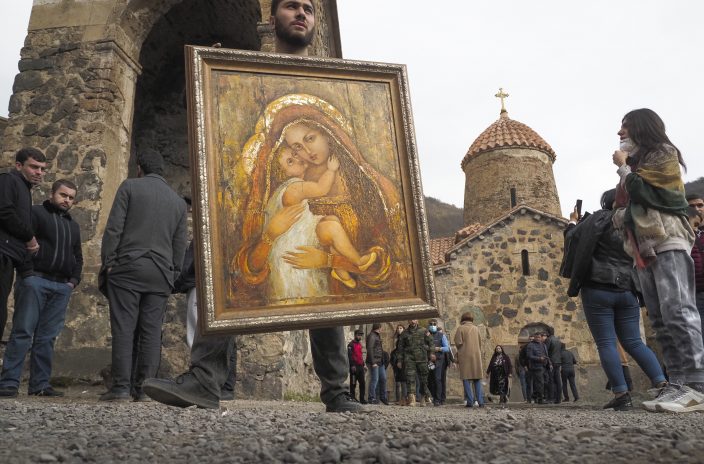 A man holds an icon from the Dadivank, an Armenian Apostolic Church monastery dating to the 9th century, as ethnic Armenians leave the separatist region of Nagorno-Karabakh to Armenia, Saturday, Nov. 14, 2020. The territory is to be turned over to Azerbaijan on Sunday as part of territorial concessions in an agreement to end six weeks of intense fighting with Armenian forces. (AP PhotoDmitry Lovetsky) 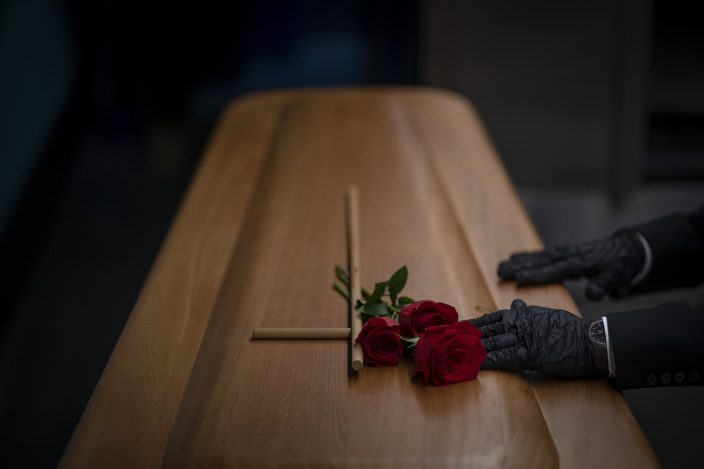 A mortuary worker prepares the coffin carrying the body of a person who died of COVID-19 before being cremated during a funeral at Mémora mortuary in Girona, Spain, Thursday, Nov. 19, 2020. (AP PhotoEmilio Morenatti) 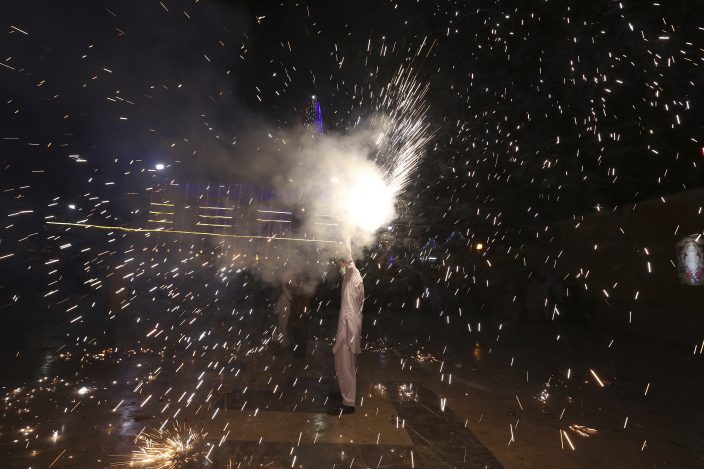 A Pakistani Hindu hold a firework at a ceremony to celebrate Diwali, the festival of lights, at Swami Narayan temple in Karachi, Pakistan, Saturday, Nov. 14, 2020. The Hindu festival of lights, Diwali celebrates the spiritual victory of light over darkness. (AP PhotoFareed Khan) 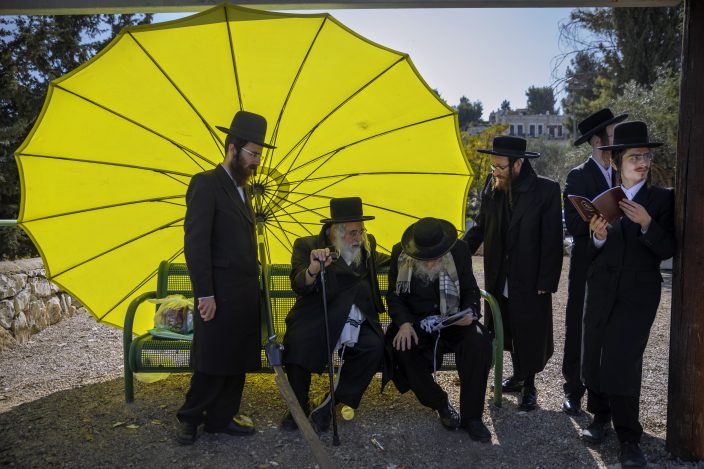 Ultra-Orthodox Jewish men gather for a protest against the construction of a hotel at a site that protesters claim contains ancient graves, in Jerusalem, Wednesday, Nov. 18, 2020. (AP PhotoOded Balilty)

Participants in a rehearsal for Pr ...

AP PHOTOS: From memorial to protest, the power of prayer

AP PHOTOS: Around the world, faith in the summer of COVID-19