The idea of Ben Simmons and Joel Embiid as a modern-day odd couple bunking together in a Center City condominium trash-talking during games of “FIFA 21” after playing taxing real NBA games momentarily got a rise out of 76ers fans.

Alas, Simmons was just joking when he said he moved in with Embiid -- who welcomed his first son with his girlfriend in September -- so the Philadelphia 76ers’ All-Stars could tighten their bond.

Simmons is good with Embiid, the max-contract cornerstones of a franchise that has not yet reached the championship heights so many expected when they were drafted two years apart. 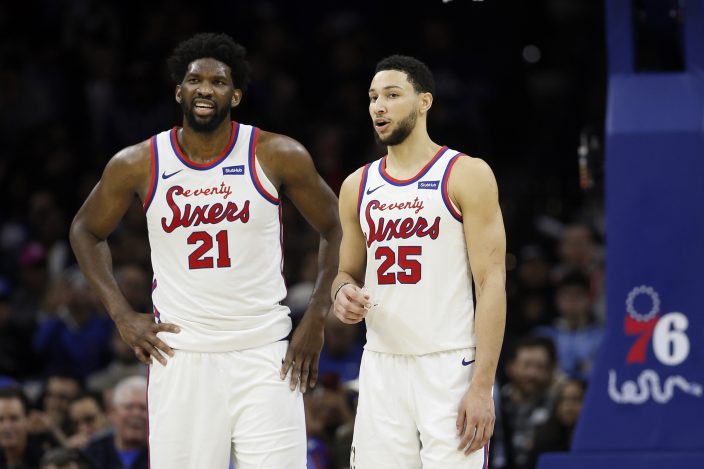 FILE - In this Dec. 13, 2019, file photo, Philadelphia 76ers' Ben Simmons, right, and Joel Embiid talk during an NBA basketball game against the New Orleans Pelicans in Philadelphia. Simmons says he’s 100% healthy following surgery on his left knee in August that kept him from playing in the postseason. Simmons is tight with center Joel Embiid and says the two franchise stars are ready to lead the Sixers to their first NBA championship since 1983.(AP PhotoMatt Slocum, File)

As for the rest of the team, the Sixers are ready to hit the reset button in coach Doc Rivers' first season running a team that netted them just the sixth seed in the Eastern Conference and a first-round exit. Former Sixers guard Josh Richardson, traded to Dallas in the offseason, lamented in August the underachieving season could be pinned on a lack of accountability from management to the roster.

Simmons said Richardson was right and the Sixers were not ready to compete for a title when the NBA restarted the season in the Disney bubble.

“We weren’t in a position to go into the bubble and win,” Simmons said. “I think our mindset was off. Accountability is a huge part of winning. I think he’s definitely right. Bringing Doc and all of these guys in, Doc’s team, with all of these coaches around, the maturity has definitely risen with the team. It’s been great to see that and see guys be accountable for certain things, and come here ready with a different mindset.”

Boston swept the 76ers in the postseason and ended former coach Brett Brown’s reign after seven seasons that put him in charge of the lose-first Process era to consecutive 50-win seasons and berths in the Eastern Conference semifinals.

So what was the problem in the bubble?

“I mean, you can’t just come into a situation like the bubble if you guys aren’t ready and don’t have that chemistry and accountability already,” Simmons said Friday. “Doc and I have spoken about it already. You can tell the teams that were doing well in the bubble were tight-knit and held accountable for certain things going on. You kind of see it with the Clippers now, things that are coming out.”

Whoa, wait a minute. The Clippers? The same team Rivers coached last season that blew a 3-1 playoff series lead in the Western Conference semis and led him to leaving Los Angeles?

The Clippers were painted in a story this week on The Athletic as an organization without any, well, accountability where star players called the shots and Rivers did little to reign them in. Clippers star Paul George even said in a separate interview Rivers failed to make the necessary adjustments to stop the losing and lead the Clippers into the next round.

Simmons said accountability -- the new buzzword in Philly - starts with the players.

“There’s only so much that can happen with players and coaches and that’s on the players to make sure they’re held accountable, and if they’re not gonna listen and do certain things, they’re not gonna win,” Simmons said. “But I think it’s a great opportunity for us, being younger guys, to have somebody like Doc come in. We gotta get it done.”

The Sixers also hired former Houston executive Daryl Morey to run basketball operations and gave the franchise a draft-night overhaul with deals that rid them of Al Horford and Richardson and brought in sharpshooter Seth Curry and drafted Kentucky guard Tyrese Maxey.

Simmons says he’s 100% healthy following surgery on his left knee in August that kept him from playing in the postseason. He averaged 16.4 points, 8.0 assists and 7.8 rebounds in his third full season.

Simmons expressed excitement about being coached by Rivers, who led the Celtics to the 2008 NBA championship. Rivers threw his support this week behind Simmons and noted, “I don’t care about Ben’s shooting as much as so many other people seem to care about it.”

The 24-year-old Simmons has been the primary ballhandler for the Sixers for the bulk of his three-year career, but the 6-foot-10 triple-double threat played power forward when the NBA season resumed in the bubble.

“I’m a player, man,” Simmons said. “There’s no, one, two, three, four, five with me. I don’t really think you can put me in a position because of my talents and what I’m able to do. I think Doc would say the same thing, I go out there and make plays.”

76ers' Simmons recovered from back injury for restart