France admits the enforced mismatch in experience between it and England makes the Autumn Nations Cup final at Twickenham appear a farce.

But coach Fabien Galthié promised one thing: "We'll be ready on Sunday, I assure you we'll be ready.”

France's six tests this autumn are double the usual amount because of the pandemic. But the Top 14 clubs forced the national union to restrict each player to three tests. The core players appeared over the first four. Eleven players then made their debut last weekend in beating Italy 36-5. 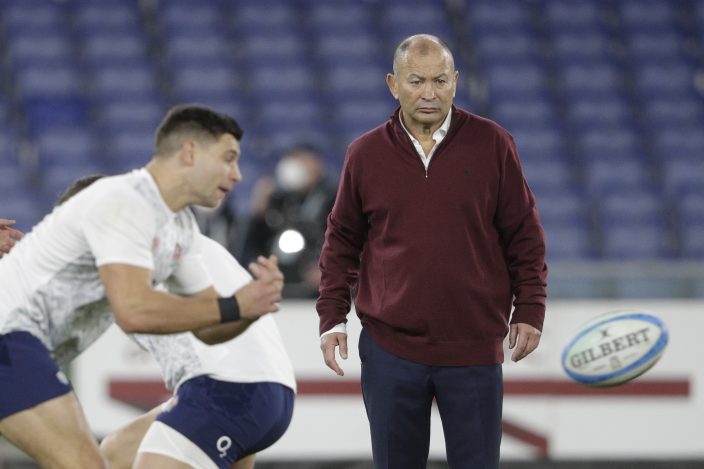 England's head coach Eddie Jones, right watches his players during the warm up ahead of the Six Nations rugby union international match between Italy and England at the Olympic Stadium in Rome, Italy, Saturday, Oct. 31, 2020. (AP PhotoGregorio Borgia)

This Sunday, England will field its most experienced starting XV with a combined 813 caps. France will send out a team with a total of 68, its second lowest ever. Fullback Brice Dulin leads with 30 caps, followed by flyhalf Matthieu Jalibert with 7.

"The players have been exemplary in their preparation and they all deserve their caps,” France team manager Raphael Ibanez said on Friday.

"Seen from abroad, this final can be regarded as ‘a farce.’ We understand. Our two national selections are not on the same footing.

"Since the start of our international period, we have not been able to benefit from two weeks of preparation (with the same team). Despite all this, we won our matches to reach the final. That means the players have focus and character. They are a talented squad and, who knows, they might be ready to knock down mountains this weekend.”

England made only one change after beating Wales 24-13 in Llanelli last week. Anthony Watson was restored to the right wing for an injured Jonathan Joseph.

The reserves went back to a traditional 5-3 forwards-backs split so English club player of the season, flanker Jack Willis, was dropped and flyhalf Max Malins recalled.

The three-match rule forced out Baptiste Serin, the scrumalf and captain against Italy, and Teddy Thomas, the try-scoring wing. They have been replaced by Baptiste Couilloud, who captains the side in his first test start, and Alivereti Raka, last seen at the Rugby World Cup in Japan last year.

Toulouse No. 8 Selevasio Tolofua will make his debut, and loosehead prop Hassane Kolingar and inside center Yoram Moefana their first test starts among the six changes from the Italy win.

Uncapped Bayonnais lock Guillaume Ducat is in the reserves along with Clermont scrumhalf Sébastien Bézy, last capped in 2016.

“What is striking about our team is their lack of common experience,” Galthié said. "So we tried to speed up all that. (England) are a team. Our challenge was to transform a selection into a team.”

France has no starters from the side which beat England 24-17 in February in Paris. England has 10.

The English seek revenge for their only loss this year and have promised all week to take the final seriously, to take France seriously, and add the Autumn Nations Cup to the Six Nations trophy they won five weeks ago.

Ccoach Eddie Jones said on Friday: "My message to the players will be to put every bit of effort into every minute of the game and win every battle.”